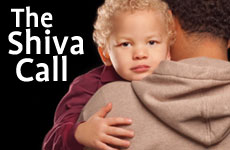 Inspiration from a house of mourning.

It was a weekday evening and my wife Judy and I were enjoying a quiet conversation, recapping recent events and trying to re-connect after a few hectic days.

Just then the phone rang. Neither of us planned to answer it, but Judy glanced at the caller ID and said "It's Batya!" Batya, our oldest, lives in Jerusalem and is expecting her third child.

My body immediately tensed. Why would she be calling now? It's 2 a.m. in Israel.

"What's wrong?" Judy blurted into the phone. I hovered over her trying to discern the answer from the other side of the line. "Batya, Batya, what's wrong?" Judy repeated, adding to me, "She's sobbing; I don't understand what she's saying."

My thoughts went to the worst possible scenario. But Judy, getting something out of Batya now, reassured me. "Everybody is okay -- the kids, the baby, Yoni..."

I could hear Judy reassuring Batya. "Ohhh, I'm so sorry. How did it happen? When was the funeral? Are you okay? Try to get some sleep... I love you. Let's talk tomorrow morning. Try to sleep sweetheart."

After she hung up, Judy explained that Batya's best friend from high school had lost her husband. He died suddenly while on a camping trip. He was only 25 years old. The couple lived in Brooklyn, but they had flown the body to Jerusalem for burial. Now the young widow, her two small children, and her extended family were returning to the U.S. to observe shiva, the seven-day mourning period. Batya asked if Judy and I would pay a shiva call to comfort the mourners.

Judy and I were saddened and feeling vulnerable. Our worries always concern our children and their physical wellbeing. It is never far from our minds -- the fear: What if? God forbid. Would we ever be able to survive such a tragedy?

I couldn't help but think that now one mother is no longer wondering, "What if?" Now that mother is asking, "How do I go on?"

If our presence could ease her suffering the tiniest bit, we would certainly pay a visit to the house of mourning.

THE HOUSE OF MOURNING

The shiva was at the mother's house. We felt an unspoken bond with her, though we had never met.

The front door had been left open so that visitors could walk right in and not ring the doorbell and disturb the mourners. When we crossed the threshold, we were immediately transported into another world. Outside was a warm, sunny, cheerful day; inside dark clouds covered the sun – we had entered a dark, sad place.

I sat down near the deceased's mother, who was hugging the young widow, as the two orphaned children, a four- and a one-year-old, hovered nearby. The widow looked much too young to bear such a heavy burden. Then the four-year-old, a gorgeous little girl with flowing blond curls, came over and scrambled onto her lap. She picked up a picture of her father displayed on the table in front of her and started to poke her finger at it. "Daddy," she said, "Daddy is in heaven now."

Tears started rolling down my face. Embarrassed, I looked up and saw the pain in the mother's eyes too great to imagine. She passed me the tissue box because she couldn't cry anymore. Then I noticed that everyone else sitting there was crying. This little girl's innocent act of poking her tiny finger – a touch of flesh against Kodak paper – pierced everyone's soul. We moved from passive visitors to sufferers, from bystanders to mourners ourselves.

I hardly knew the deceased young man. I had never seen this little girl, so why was I, and all the others, so moved?

In answer to all the philosophers who pontificate about whether or not there is an eternal soul that is common to all humanity, such a moment screams "Yes, we are all one!"

This truth seared through me to the core. It cut me open, leaving me raw and vulnerable. I think most of the people in that room felt the same.

There were other moments during that shiva call that I will never forget, because they drove home lessons I needed to learn.

When the young widow spoke about how great her deceased husband was with his small children – how they were the center of his life, how he played with them constantly, seemingly never tiring of their simple games – the guilt rolled in.

I don't play with my little kids enough. On Shabbat afternoon, which should be my prime opportunity, I slink off to take a nap while the kids play by themselves or with Judy. I start off every Shabbat telling myself that this one will be different – this weekend I will hang out with the kids – but my weary body wins the battle and exhaustion wipes out my resolve. During the week, I am torn between work and kids, and work always wins out.

My kids notice, of course. They chide me constantly that I have missed each birthday at least once because of my business trips. I can just imagine what they will say when they sit shiva for me: "Dad never played with us. He missed all our birthdays because he was working too hard."

Maybe this is why it was so uncomfortable for me to visit that house of mourning. All my weaknesses came rising to the surface to confront me. The demons I have been running from suddenly surfaced in all their ugliness.

I told myself to hug each one of my kids when I got home.

During the hour we were there, when I walked down the hall in search of a bathroom, I saw the deceased man's brother hugging the children. He was holding to them ever so tightly as if trying to replace the love and hugs they were already missing from their father. It was such a special moment. I could sense the strength of the feelings being transmitted in those hugs, and I wondered if from somewhere in the spiritual beyond, the father was channeling his love through his brother.

That moment, I told myself to hug each one of my kids when I got home.

Another moment that spoke to me was when the young man's Torah study partners talk about his commitment to learning – how he always pushed him to get up in the morning, how he was always ready to learn a little bit more. Will any study partner say that about me at my shiva? I realized it has been quite some time since I had the serious commitment to learning like that young man.

I know that I went to pay a shiva call to comfort the mourners, but the visit turned out to be a look in the mirror – and the picture was not pretty.

As I was sitting there, my chair – one of many delivered by a special non-profit organization that brings chairs and prayer books to the houses of mourning – suddenly collapsed under me. The screws holding it together let go, and it broke apart. It was as if the weight of the thousands of people who had sat in this chair became suddenly too much for it to bear, and it collapsed either from all that pain or from the added burden of my guilt. I knew God was sending me a sign: Wake up before you collapse.

The next morning, I turned a new leaf. Instead of letting my girls take the bus to school, I decided I would drive them myself. "My work can wait," I told myself. I woke them up with kisses and hugs, and I rolled out the family convertible to make this a really fun ride.

The day was warm and sunny. I put on a tape of Jewish A-cappella and let it blast out as I drove down the street with three of my most precious belongings sitting in the car with me. They were laughing as we drove with the top down on a beautiful spring day singing together to the music, waving our hands over the top of the car. We stopped for hot chocolate and bagels on the way, and by the time we arrived at the school, I felt so good to be enjoying the simple things of life, time with my kids.

I let them out, kissed and hugged them and sent them on the way to class, hoping that they will remember this day. Life is a series of moments. Nothing more, nothing less. That day, inspired by the experience of the house of mourning, I tried to create a moment they will remember. It made my life a little bit more meaningful. And it's up to me to fill my life – and theirs – with so many more.

Bat Mitzvah Gifts for My Daughter

The Plague of the School Science Fair
Deep Breaths
What Happened to the Truth?
The Japanese Everything Bagel Spice Recipe
Comments
MOST POPULAR IN Family
Our privacy policy