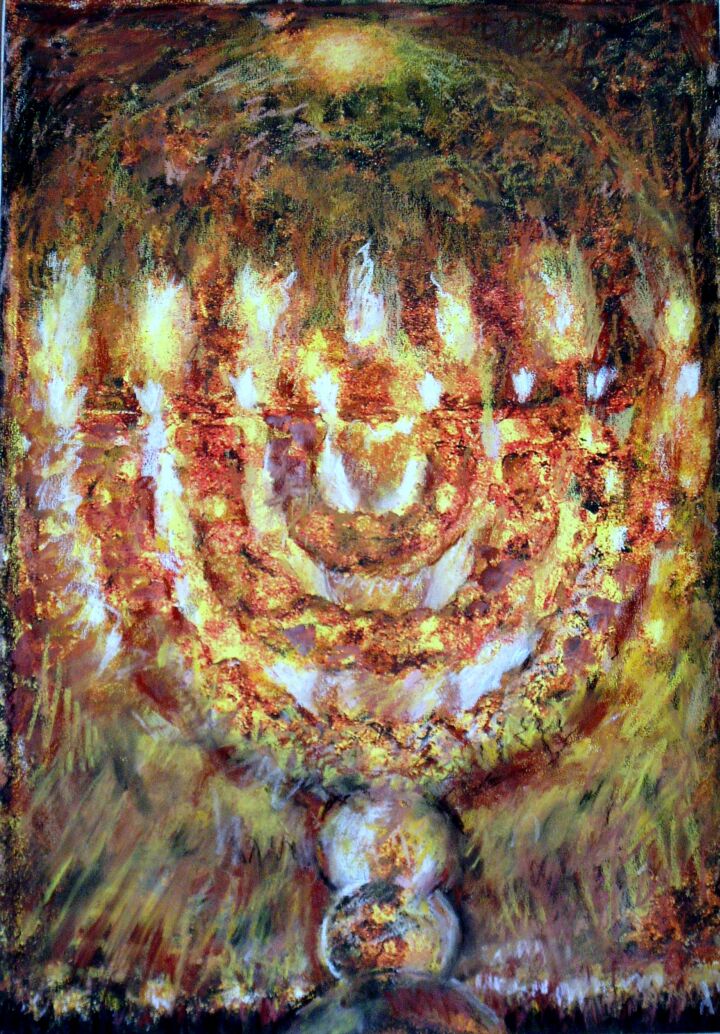 God spoke to Moses, saying: "Speak to Aaron and say to him, 'When you light the lamps, the seven lamps shall cast their light toward the face of the Menorah.'" (Numbers 8:1-2)

In Jewish tradition, it is believed that Jerusalem and its Holy Temple have a heavenly counterpart and that the seven branches of the earthly Menorah shed light in front of a heavenly Menorah (Sfat Emet).

Raanan began this work by freely spilling and splashing paint onto a canvas on the ground. The Menorah emerged from a very wet canvas swimming with gold and brown paint. He coaxed it to life by dipping wadded tissues into the wet paint and blotting the water, which produced various textures as well as tones of color. Using tissues instead of a brush created the effect of shimmering light. As the tissues picked up most of the paint, the Menorah became white with inner light; and with the addition of pastel, the glow of light was increased.

He said of this painting: "I saw the shape of the Menorah, and it looked like it was on fire. I kept turning the painting upside down. This was the first time I painted this way, turning it upside down and painting from both directions. It seemed to me that I was painting two Menorahs - a celestial one and an earthly one. In the end, I stayed with the more earthly version, because it was bigger and felt more substantial. It was a fascinating piece. It fluctuated between all the elements ? earth, fire, water, and air. It was solid, but not; it was light, but not; it was airy, but not; and yet it was all of these."

Burning Bush
The Power Of Prayer
Va’etchanan 5782: A for Effort
Can You Show Me This "God?"
Comments
More Articles on Be'halot'cha
MOST POPULAR AT Aish.com
When King Louis IX Tried to Wipe Out Judaism
Our privacy policy
Aish.com Is Looking for Great Writers