The Alphabet of Life 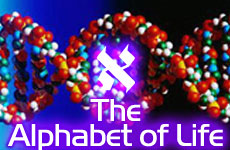 DNA is one of the most powerful clues we have of the existence of a spiritual reality.

DNA are three letters full of paradox. What they represent remains little understood by the public, yet they are on everyone's tongue. Amid the chatter of popular culture, the truth gets lost that DNA is one of the most powerful clues we have of the existence of a spiritual reality, maybe to the existence of God.

An acronym for deoxyribonucleic acid, DNA refers to the form taken by the biological information that directs the production of proteins and other cell components. In 1953, James Watson and Francis Crick famously described its double-helix shape. The information thus encoded, the genome, influences how a living organism's body gets constructed, though how far this goes, and how it works, are questions that remain obscure.

We talk about DNA as familiarly as we do the USA. The idea that your genes determine your susceptibility to diseases and addictions is a stock theme of popular health discussions. On TV cop shows, law-enforcement officials are constantly using DNA to solve cases, whether new or "cold" -- as real police do.

For a fee, DNA testing can shed light on anyone's genetic ancestry, including whether you have "Jewish genes." There is supposed to be a "God gene" for religious belief in general. And a "gay gene." And so on.

But all this is trivial compared to the largely unheralded insight gained from the Human Genome Project, completed in 2003. The insight is disturbing. It is that while DNA codes for the cell's building blocks, the information needed to build the rest of the creature is seemingly, in large measure, absent.

Consider the hoax "master" genes that supposedly determine the spatial configuration of the front and back ends of creatures as diverse as frogs, mice and humans. As British physician James Le Fanu writes in a fascinating new book, Why Us? How Science Rediscovered the Mystery of Ourselves (Pantheon), Swiss biologist Walter Gehring showed that "the same 'master' genes mastermind the three-dimensional structures of all living things... The same master genes that cause a fly to have the form of a fly cause a mouse to have the form of a mouse." The physically encoded information to form that mouse, as opposed to that fly, isn't there. Instead, "It is as if the 'idea' of the fly (or any other organism) must somehow permeate the genome that gives rise to it."

Such an understanding, of nature driven by a force outside nature, was dominant in biology before Darwin. Baron Georges Cuvier (1769-1832), director of Paris's Musee d'Histoire Naturelle, held that there was an unknown biological "formative impulse," an organizational principle of some kind that directed the formation of diverse kinds of life.

The concept goes still further back. Much further. What Cuvier called the "formative impulse," was called God's "wisdom" by the rabbis. The Bible teaches, "The Lord founded the earth with wisdom" (Proverbs 3:19).

With DNA, there is, in one sense, less there than meets the eye. But in another sense, there is much more. For if DNA can't entirely account for the way bodies are put together, there remains something deeply suggestive about the fact that curled at the heart of every cell there lies a code. How did it get there?

A staple of media coverage of DNA is the story, repeated endlessly, about some scientist or other who's the latest to synthesize molecular precursors of DNA (or its genetic partner, RNA), thus purportedly showing how biological information could have arisen on Earth unaided. The problem with these demonstrations is that they always depend on intelligent guidance, that of the scientist in his lab, thus suggesting the very opposite lesson of the one intended.

The only kind of source we know of that can produce a "functionally integrated information-processing system" like that in the cell is an intelligent source.

In another new book, Signature in the Cell: DNA and the Evidence for Intelligent Design (HarperOne), my colleague Stephen Meyer, a Cambridge University-trained philosopher of science, reminds us of the failure of every avenue by which science has tried to explain the origin of the genetic information required for the first life. Explanations depending on unguided material processes alone usually founder on a chicken-or-the-egg paradox: notably, that "specified information in DNA codes for proteins, but specific proteins are necessary to transcribe and translate the information on the DNA molecule."

DNA acts like a computer code, or like a language consisting of letters and words, arranged in specific sequences to accomplish a specific task or convey a specific meaning. As Dr. Meyer observes, the only kind of source we know of that can produce a "functionally integrated information-processing system" like that in the cell is an intelligent source.

As a Jew, I find it intriguing, at the very least, that Jewish tradition anticipated precisely the kind of evidence that Meyer deals with in his book. DNA refers to the letters of a genetic "alphabet" that in the correct combinations encode the diversity of all life forms. Kabbala too speaks of such an alphabet, comprised of the letters of the Hebrew alphabet, with which God continually speaks the world into existence.

Different combinations of letters produce different creatures. A century and a half before Watson and Crick, Rabbi Schneur Zalman of Liadi sought to make Kabbala accessible to ordinary readers. In the Tanya (1796), he writes of how "the creatures are divided into categories [both] general and particular by changes in the combinations, substitutions and transpositions [of the letters]."

Something is out there beyond nature, guiding the destinies of living creatures. Whether we think of it as God or some other unknown agent makes a big difference. But the progress of science from imagining existence as a purely material affair, without purpose, as Darwinian evolution still portrays the matter, to the more advanced description toward which biology increasingly points, is a major step in the right direction.

The writer, a senior fellow at the Discovery Institute in Seattle, writes the Kingdom of Priests blog at Beliefnet (blog.beliefnet.com/kingdomofpriests).

The writer, a senior fellow at the Discovery Institute in Seattle, writes the Kingdom of Priests blog at Beliefnet.

The Song of the Elephant

The Song of the Fish

SARS and Self-Endangerment to Save Others