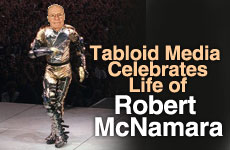 Mourners gather at Dept. of Planning, Programming and Budgeting Systems.

By 6 am Tuesday morning, as news broke of former Secretary of Defense Robert McNamara's death, press releases began to flood the newswires. Quincy Jones read a prepared statement, swarmed by Inside Hollywood and US Magazine, "An innovator, a legend. We will all miss the creative genius of Robert McNamara." Celebrities fought to be interviewed by Mary Hart, with Lionel Richie telling ET, "He brought so much to the field of statistical analysis. He changed the entire military industrial complex forever." Shaquille O'Neal tweeted, "R-Mac gone. Shuda been defensive player of year from '61-67".

Around the world, spontaneous celebrations of McNamara's life sprang forth. In Washington, the Department of Planning, Programming and Budgeting Systems was inundated by rabid fans, seeking any memorabilia from old punch cards to calculators to ballpoint pens. In Jerusalem, crowds gathered outside the "Misrad Statistica" (Statistics Bureau) to lay wreaths, many wearing McNamara's trademark beige fedora, trench coat and wire-rimmed glasses. From Sao Paulo to Singapore, TV networks replayed hours of his greatest congressional testimonies.

Immediately, speculation began to surround the McNamara family. Would his second wife Diana gain custody over his children Robert, Margaret and Kathleen, 66, 63 and 61 respectively? Who would gain control of his collection of Beatles albums? Interviewed on Larry King, former Israeli Minister of Defense Yitzak Mordechai stated, "Let's remember the man who fought communism and forget his salacious personal life." But America will be hard pressed to forget a controversial icon who shaped so much of today's culture.

Dare to Dream
For Every Individual, A Torah Scroll
Allegiance To The Monarch
Meet the Real You: Yom Kippur
Comments
MOST POPULAR IN Jewlarious
Our privacy policy
Aish.com Is Looking for Great Writers