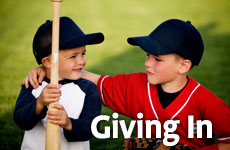 Is my son excelling at helping others or lacking assertiveness?

My friends say I am making a mountain out of a molehill. My two boys, ages 10 and 12, share a room. I’ve been noticing that the older brother always gives in to the younger one for the sake of peace: letting him cheat at games, monopolize the room etc. Although the older one seems increasingly resentful, he makes no move to assert himself. Lately he’s allowed a lethal Lego ‘set up’ to overtake the bedroom.

Should I leave well enough alone or do I intervene? Is the older brother displaying good character or just plain passivity?

We all realize that the family is where we learn our future social behaviors -- from ‘shopping’ in our sister’s closet or to playing ‘killer’ basketball with our brothers and everything in between. Our childhood patterns haunt us down the road, well into adulthood.

Start by talking to your older son and asking him how he feels about ‘looking away.’ This is probably easiest done in context, when there is an example on the table. The Lego situation seems perfect; discuss with him what it’s like to have to risk life and limb to get to his bed! Ideally, your son will express some of the resentment or even the dreaded “It’s not fair,” but I wouldn’t count on it. More than likely, he'll repeat, “It’s okay, it doesn’t matter,” and it will be up to you to discover the true story.

Before you begin the ‘talk’, explore possible reasons for your son’s behavior. Does he think it is good to give in graciously for the sake of peace? Have these feelings been reinforced by the praise the child receives for engaging in such behavior? Or, does he suffer from low self esteem and feel unentitled to having his wants or needs met? Could he be imitating the ‘Aren’t I a nice guy?’ style from some other family member who does things like lend without repayment (until the day he loses it and blows up in frustration!)?

Base your response on your son’s particular profile. Help your child learn that good character means caring for another person and making sure that our speech and behavior reflect that care. It does not mean putting the needs of others before our own especially when it costs us. A person of character chooses -- but is not compelled -- to put another first. He does so without feeling victimized, put-upon, angry or resentful.

It doesn’t mean letting you brother cheat at Scrabble, but it may include letting a younger sib ‘win’ at checkers.

It does include lending both money and possessions, but with the expectation of return as per agreement.

Help your child understand that we all have wants and needs that should be honored. Failure to attend to these issues often lead to frustration and rage. So, while we don’t want to encourage selfishness, we do want to give our children the permission and the courage to take care of themselves too, even in the face of disapproval.

So, it’s great to play a game of touch football when your sibs must have you for the team, but, not if you want to work on your science project.

And, it’s fine for you or your child to ask repayment of that loan, even if the friend thinks you’re being petty.

Teach your child to negotiate fairly without giving up his needs and wants. It’s not only my way or your way. We can also compromise or come up with a new way. Developing these skills in the safety of the family is a wonderful way to prepare your child for future relationships.

Asking me to handicap myself in a game because I am older is fair; cheating is not.

Lego set-ups are amazing, but they need to be put out of the way at night so I have access to the room.

I hope this is useful, not just for you son, but for yourself as well. The line between taking care of ourselves and others is a fine one and not to be taken for granted.

Dr. Sara Teichman is a psychotherapist in private practice in Los Angeles and Clinical Director at Etta Israel Center, a center for youth with special needs. She speaks about parent education thoughout the United States and runs parenting groups in Los Angeles. In addition, Dr. Teichman has many years of experience as an educator in both the public and the private sector and currently is a faculty member at Ma’alot College- Los Angeles and UCLA- Extension. Her ”Ask Dr. T” column has been published in Jewish Life and Binah magazine.

Spice of Life
Olivia Newton John’s Grandfather was a Nobel-Prize Winning Jewish Physicist
Don’t Believe in Other Gods Versus God is One
Seeing Without Eyes
Comments
MOST POPULAR IN Family
Our privacy policy
Aish.com Is Looking for Great Writers