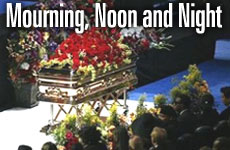 Jewish mourning and the American spectacle of celebrity death worship.

The contrast between the American spectacle of celebrity death worship and the Jewish tradition of mourning has rarely been as sharply defined as it has this past week.

I write these words 12 days after Michael Jackson died, his funeral arrangements and burial site still undecided. The star's death has become as big a phenomenon as his troubled life. His family members hold press conferences, appear at music awards ceremonies and allow tickets to be distributed through a lottery for a huge, public memorial ceremony.

In Judaism, by contrast, upon death there is an emphasis on burial as soon as possible, for the dignity of the deceased and to ease the emotional strain on the family. Rituals and practices are prescribed in great detail, a tradition of order, creating a measured response to grief. It is intense for the seven days of shiva, then eases after 30 days, but the mourning period for a parent is a full 11 months, during which time Kaddish, praising God, is recited several times a day.

Judaism's handling of death is a blend of psychological sensitivity and theological faith, grounded in the recognition that death is a part of life.

The mourner is brought back to the reality of the everyday experience gradually, over time.

Alas, we Jews know a great deal about incorporating mourning into our lives. It is part of our annual calendar, and this week we begin the saddest days of the Jewish year, a three-week period of remembrance and graduated grief that grows in intensity, culminating in Tisha b'Av, marking the destruction of the Temple in Jerusalem 2,000 years ago.

While Western culture glorifies the individual -- and celebrity deaths elicit a huge outpouring of emotion, from Elvis to Princess Diana to the King of Pop -- in Judaism the emphasis is on the collective, and we celebrate, pray and grieve as a group. On Tisha b'Av, we mourn our national fate and the deaths of ordinary Jews, in the readings of elegies and the Book of Lamentations, noting the tragedies that have befallen our people over the centuries on the Ninth of Av.

We know the yahrtzeit of Moses, our greatest leader (the seventh of Adar), but it is not a national day of mourning. That is reserved for the destruction of the Temple, and the nameless men, women and children who perished along with Jewish sovereignty. We mark the yahrtzeit of rabbis and sages, not cultural icons, in a contemplative way, through prayer, study and pledges of charity.

Judaism is less about personal heroes than about recognizing our charge to improve the world, based on faith, justice and acts of kindness.

In America, mainstream religions have their wakes and memorial services, but outpourings of grief over our celebrities tends to be intense, fleeting and, for most of us, passive. We are captives of the media, watching endless "Breaking News" reports that offer little in the way of new information, aware that we are seeing the same footage recycled day after day. (Poor Farrah Fawcett had the misfortune of dying on the same day as Michael Jackson, bumped off the headlines for eternity.)

We are focused, mesmerized -- until the next tragedy, when we move on.

Part of the genius of our religion, by contrast, is in its collective memory, its ability to recall and relive long-ago events by internalizing them. The Exodus from Egypt is still real for us because, through the annual Seder, we taste the bitterness of slavery in the maror and the sweetness of freedom in the four cups of wine.

When a loved one dies, we recite the Kaddish several times each day and participate in a minyan, finding solace in praying for the soul of the departed and in being with other worshippers, not alone.

And on Tisha b'Av we relive the destruction of the Temple. Though the events took place 20 centuries ago, we abstain from food and drink for more than 24 hours, and in many synagogues worshippers sit on the floor as mourners, reading and reciting aloud the wrenching eyewitness account of the tragedy.

We shed tears for the resulting exile from the Promised Land, for the loss of life and of God's tangible presence on earth.

Exactly a decade ago, July 16, 1999, Americans underwent a public grieving for John F. Kennedy Jr., killed at 38 with his wife and sister-in-law in a plane crash. We wept for another young Kennedy prince brought down by tragedy, and for the fate of unfulfilled promises within each of us. We were glued to our televisions for several days and nights, and then it was all over.

Similarly, as much as Michael Jackson dominates the news now, his story will soon recede from our consciousness.

For the Jewish people, the experiences of the biblical patriarchs and matriarchs, the commands of Moses and the tragedy of Tisha b'Av have been neither forgotten nor lost. The events of the ancient past are still real for us, the joy of the festivals refreshes our spirits each year and the recitation of Lamentations takes us from grief to acceptance.

Indeed, we are taught that ultimately Tisha b'Av will be a day of great joy in Messianic times. The Talmud says: "Those who mourn for Jerusalem will merit to see it in its joy."

Perhaps when we open ourselves to emotions that go beyond us as individuals, connecting us to our past as well as our future, rooted in a mission of mitzvot, we have the ability to transcend our mortal limitations. We hope that with the Three Weeks now upon us, the time spent reflecting on the pain of Jewish history will lead to the reward of someday sharing in its glory as well.

This article originally appeared in The Jewish Week.

Confessions of a Television-a-holic
Faith: the Axis Upon Which the Wheel of Science Turns
Love - Not Just About Chemicals Anymore!
Is There a Moral Code in a Virtual World?
Comments
MOST POPULAR IN Current Issues
Our privacy policy