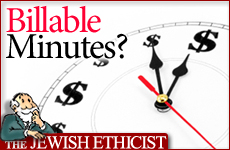 If you bill by the hour, adopt an equitable policy for interruptions.

Q. I bill my clients by the hour. Do I have to sit with a stopwatch to deduct the time I spend on a brief phone call to another client, a cup of coffee, or a trip to the bathroom?

A. Surprisingly, this is one of the most common questions I receive. Many years ago I wrote a column on this topic in which I insisted on deducting all idle time; since then I have adopted a more nuanced view. My answer always is that this is not an issue between you and the rabbi, or you and the ethicist; it is an issue between you and your client. The best policy is the one mutually agreed upon between the parties.

However, after dealing with this question so many times, I would like to present some important considerations in making such a policy.

There is no perfect method of billing, and every one has advantages and disadvantages. Paying by the hour fails to reward efficiency, whereas paying by results can result in payment which is grossly unfair in individual cases where the work takes much longer or shorter than expected.

Even within the methodology of paying by the hour, there are advantages and disadvantages to counting seconds. On the one hand, the client can ask himself, do I really have to pay for my consultant to drink a cup of coffee? Probably not. On the other hand, he can ask himself, do I want to pay for time when my consultant is tired and thirsty? Do I want to pay for time my consultant is spending on the phone with another client? Probably not. But on the other hand, do I want him to charge me for a thirty-second phone call when he is in the middle of working for someone else?

And do I want him to work with a stopwatch in hand, concentrating on how much time he spends rather than how well-spent that time is?

Even though there are no hard and fast rules, there are certain guidelines. The best policy is to avoid conflicts as much as possible. Try to devote specific blocks of time to specific projects, and to avoid distractions during that time. If you get a phone call during time devoted to one client, try to reschedule it later in the day. To the extent practical, schedule coffee and bathroom breaks between these blocs.

If you work on a computer, you can benefit from a number of good programs that track your time. These programs can help you not only with billing, but also with assessing and improving your productivity.

Ultimately, you have to create a system you feel is fair and be open with your client. If you are the kind of person who is driven to distraction by a stopwatch, and you feel that client phone calls tend to balance out in the end, you can tell your clients that you will not stop the clock when another client calls briefly during your time – but you will also not charge them for a brief phone call on someone else's time.

The ideal of total devotion to the client is exemplified in a remarkable story in the Talmud about Abba Chilkia: (1)

When the world needed rain, the rabbis would send to him and he would seek mercy, and the rains would come. One time the world needed rain, and the rabbis sent a pair of rabbis to him so that he could seek mercy and bring rain. They went to his house but did not find him; they went to the field and found him hoeing. They greeted him but he didn't [even] turn to them.

The Talmud then tells that when he arrived home, he went up to the roof with his wife where both prayed secretly, so that no one would know that it was his prayers that brought the rain; then the rain began to fall. So Abba Chilkia is held up as the ideal of an individual who is outstandingly scrupulous in his business obligations and is specially beloved by God.

Yet the level of devotion displayed by Abba Chilkia is nowhere recorded as binding law, and in fact it is not forbidden to greet someone while you are at work, unless there is a specific workplace rule forbidding it.

The best idea is to give careful thought to the billing policy which will be the most fair to yourself and your clients, and to be totally open about what the policy is and why it is in everyone's interest. Once the policy is in place, you should give your clients the benefit of the doubt.

The Jewish Ethicist When Can I Hold On To Assets

The Jewish Ethicist: Some Favor