The Battle of the Angels 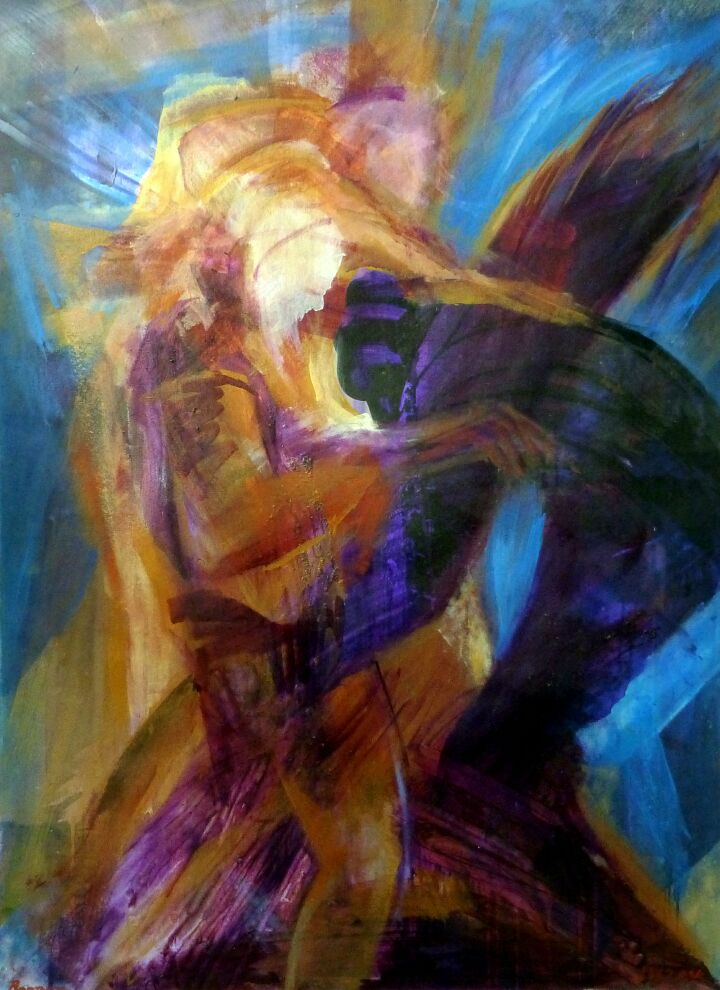 Jacob remained alone, and a stranger appeared and wrestled with him until the break of dawn. When he saw that he could not defeat him, he touched the upper joint of [Jacob's] thigh. The socket of Jacob's hip became dislocated as he wrestled with him. And [the stranger] said, "Let me go, for dawn is breaking." But [Jacob] said, "I will not let you go unless you bless me." (Genesis 32:25-27)

In this oversized canvas, the larger-than-life figure of Jacob wrestles with the dark man or angel. The strong diagonals of the angel's arms look like wings; as one stretches upward, the other strikes Jacob's thigh. In strong contrast to the dark-purple man is the golden-red figure of Jacob whose hands grip his opponent's shoulders. They wrestle and become entwined one with the other. According to Rashi, the Hebrew word for wrestle, (yei'avek) means to be attached or entangled. "It is the habit of two people who make strong efforts to throw each other down, that one embraces the other and attaches himself to him with his arms."

At the end of the struggle, when the darkness of dawn had passed, a light shone on Jacob and he did not let the figure go until he blessed Jacob with a new name. That name would no longer be Jacob (meaning supplanter) but Israel, he who prevails over the Divine. In the foreground of the painting is Israel emerging victorious, his face aglow, while the less-distinct shapes behind him are of Jacob receding into the background.

Counterpoised over the deep-blue background, a warm, gold light predominates over the tense conflict of the night-long encounter. This battle is symbolic of each person's wrestling with his or her darker side, and shows how blessing and light often come through struggle.

Cave of the Patriarchs

More Articles on Vayishlach
MOST POPULAR IN Aish.com
The Scandalous History of the Aleppo Codex
One Drink Too Many: My Journey of Breaking Free from Alcohol
How a Spate of Synagogue Bombings in the 1950s Is Impacting Us Today
This Is How Your Marriage Ends
When There are No Words
Ridley Road: The Real Story of the Jewish Anti-Fascist Group in 1960s London
Our privacy policy