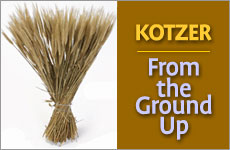 Think twice before climbing a tree on Shabbat.

The third melacha in the 'Order of Bread' is Kotzer1. This translates literally as 'reaping' or 'harvesting' – that is, taking a growing thing from its natural source. A simple example would be picking an apple from a tree.

Any time you remove something growing from its source of growth, you are doing an act of Kotzer. This applies to any kind of growing thing: fruits, vegetables, grains, wood, and so on.

The growing item does not have to be attached to soil – it can be growing in another medium. So, for example, mushrooms and other fungi, which don't grow in the ground, are covered by the melacha of Kotzer.2 Similarly, bean sprouts that have taken root cannot be removed from their growing environment. 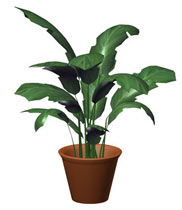 An interesting illustration of this idea relates to potted plants. In halacha, a plant growing in a perforated pot (known as an atzitz nakuv) is considered to be connected to the soil in some instances.3 Since the pot has holes, the plant can absorb nutrients from the ground when it is placed on or above the ground. For this reason, the plant is said to be 'connected' to the soil. So if you have such a plant, and it is placed on the soil, you may not remove it from there on Shabbat.4

Kotzer also applies when further growing is no longer possible. Let's say our friend Joshua has a fruit tree in his yard, and he sees some fully ripened fruit on the tree. (In other words, the fruit is no longer getting nourishment from the tree). He would not be permitted to remove this fruit.5

(1) Fresh vegetables sold with roots attached – It is a true blessing that we are able to buy fresh produce regularly. Sometimes, we can even get items that are really fresh, maybe from a local farmers' market. These vegetables might come with their roots attached, and sometimes even with some soil as well.

Following the ideas we've developed here, you would need to remove the roots or the soil before Shabbat if you wanted to eat the vegetable. Here, although the roots aren't connected to anything, the plant is still attached to the roots and could derive some further nourishment from them. Cutting the plant from the roots would then be Kotzer.6 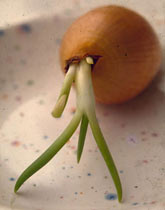 (2) Vegetables sprouting in a moist environment or stored in soil – Some vegetables (such as carrots, onions, and potatoes) are often stored in a cool and moist area once they've been harvested. Let's say you have some onions in your cellar, and when you go to use them on Shabbat, you see they've sprouted. This kind of sprouting takes place because of the conditions the onions were stored in. Does this mean that if you take them out of the cellar you will be violating the melacha of Kotzer?

Actually, no. The prohibition of Kotzer doesn't apply when the growing took place in a non-normal way. Here, the growing wasn't "normal," since the plant was not physically connected to any growth source.7

Before continuing, let's step back and think about the meaning of this melacha. If we go back to the idea of creative labor (which we discussed in lesson #1), we may better understand the idea behind Kotzer.

When we separate a growing thing from its source, we have essentially created a new entity: once the growing item is disconnected, it is no longer a plant, but something ready for human use. In this sense, it is a 'new' object, and therefore the act of reaping is a creative act.

On to some further applications.

Often, the Sages extend halacha by instituting measures known as gezerot (recall this idea from lesson #1). In the case of Kotzer, there are a number of important gezerot to know.

The Sages decided that a person should not use a tree on Shabbat. Since picking a fruit, breaking a branch, and similar activities are considered Kotzer, the Sages determined that prohibiting the use of trees would help us avoid this melacha.

What does "use" mean here?8 Really anything that involves moving the tree, such as

The gezera against using trees extends also to items that are connected to a tree. For example, if our friend Joshua placed his suit jacket on a tree branch while outside, he would not be able to retrieve it until Shabbat ended. 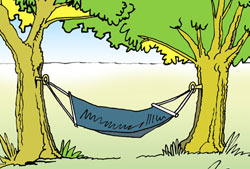 Interestingly, the Sages did not distinguish between living trees and dead ones. However, they did make an exception for tree stumps that are less than 11 inches (29 cm.) high. You may sit or stand on this during Shabbat,10 since no one would consider it to be in the same category as an actual tree.

It may seem logical that you shouldn't smell a fruit attached to a tree, since you might forget that it's Shabbat and yank the fruit off – the classic case of Kotzer. The Sages thought so as well, and therefore this action is not allowed.

You are permitted, however, to smell flowers, even those which are attached to the ground.11

Picture this: you're on your horse on Shabbat, and you are riding under a tree. Some branches are in your way, so you brush them aside, breaking a few. Or, you need a branch to use as a prod for the horse, so you grab one.

As we've learned, removing the branch would be an act of Kotzer. So as to avoid this scenario, the Sages decided to forbid riding (or otherwise using) all animals on Shabbat.12

At first, this may seem like an overly broad prohibition. After all, not all animals can even be used for riding. But we need to look beyond just the technical issue of breaking a branch. Animals played a major role in daily life in earlier times, and in some places they do so today as well. By setting them off limits on Shabbat, the Sages were making another significant distinction between how we behave on Shabbat compared to the other days of the week.

If you have a house pet, then, you should discuss with your rabbi how to care for the pet on Shabbat.

Laws of Shabbat
previous
Article #5 of 34
next
Like What You Read?  Give Jews around the world the chance to experience engaging Jewish wisdom with more articles and videos on Aish. It would make your mother so proud and as a nonprofit organization it's your support that keeps us going. Thanks a ton!

23. Bishul - Part 5: Hatmana – Insulating Food
Vayelech 5783: Regret and Repent
Rabbi Sacks: Focus On the Important, Not the Urgent
Put Your Foot Down: Are Human Feet Poorly Designed?
Comments
MOST POPULAR IN Jewish Law
Our privacy policy
Aish.com Is Looking for Great Writers