5 Dysfunctions in a Relationship 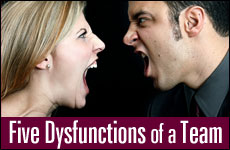 Since you and your spouse are a team, here are key principles for building a strong marriage.

"You know that you two are complete opposites, right?" my rabbi said to us two weeks before our wedding. My future husband and I looked at each other. We hadn't really thought about it. But now that he’d pointed it out, I could see there were some minor differences between us. My fiance was laid back. I was intense. He was a logical and concrete thinker. I was the abstract, creative type. I loved the city. He loved the country. But so what?

"And the two of you will make a great team – not despite, but because of your differences. The Torah is made of black letters against a white page. Without the white, you can't see the black letters. And without the letters, the white has no content. Do you see what I mean?" We nodded, but I'm not sure either one of us completely understood.

"As long as you appreciate each other's personalities, you'll be okay. Focus on how each of your unique personalities contributes toward your shared goals. Don't tolerate. Appreciate."

At the time, we were so excited about getting married that these pearls of wisdom seemed irrelevant to us. Of course we would appreciate each other!

Now, 15 years and five children later, we are still working on understanding and living this advice. The more we see ourselves as a team and focus on our shared goals, the stronger our marriage becomes.

Patrick Lencioni’s book, Five Dysfunctions of a Team, teaches business teams how to become more effective. Avoiding these pitfalls is also a key to successful marriage.

We all know that a good marriage requires trust, but trust goes beyond being dependable. Trust means the ability of each team member to make himself vulnerable and to believe that this vulnerability will not be used against him. Trust means believing that your spouse is on your side.

It sounds simple, but many conflicts in marriage center around this issue. Spouses are afraid to show their weakness because they aren't sure if their partners will stand by them. When husbands and wives cannot be vulnerable with each other, they spend a lot of individual time and energy on tasks that really require teamwork. This drains both partners.

Reassure each other that you are on the same side and that you won't play on each other's weaknesses… even when stress levels rise.

Many people believe that less conflict indicates a better marriage. Actually, conflict is necessary for a strong marriage.

Create space and time in your marriage dedicated specifically to conflict resolution. Stick to the issues and remind each other that conflict is a creative tension that is healthy and necessary for building a strong marriage.

Commitment consists of two key components: clarity and buy-in. When a couple needs to make any major decision together, it is often difficult to know what is the right move. This lack of certainty can freeze them in place even after they seek out advice and arrive at an informed choice.

When a couple makes a decision together and sticks with it, they have achieved the clarity component of “commitment.”

When one spouse defers to the other on a decision, that is where the idea of “buy-in” becomes important. Buy-in means that we don't need to get our way in order to stand behind someone else's decision. We only need to know that our opinions and feelings have been listened to and considered by our spouse. Commit to stand behind all decisions you make as a couple.

Another common misconception about marriage is that there is no place for criticism. But just as there is healthy and unhealthy conflict, there is also constructive and destructive criticism. Constructive criticism is honest feedback about unmet or misunderstood expectations. Often, husbands and wives are reluctant to proffer this because they fear hurting each other's feelings.

This is a trap. A major pitfall in many marriages is not clarifying expectations – and then subsequently feeling resentful that those needs are not being met. When spouses agree to spell out their mutual expectations and to openly discuss successes and failures, there is less ambiguity and frustration – and more positive regard for each other.

When team members stop focusing on the goals of the team, they can easily shift to working on their own objectives at the expense of the team. A team needs specific goals in order to evaluate whether they are achieving results.

A marriage needs this, too. Without spelling out shared goals, we are in danger of slipping into “parallel lives.” In order to stay on track, a couple should periodically check how they are succeeding at their shared goals, and whether those goals require modification.

Any team succeeds not despite but because of the unique attributes of each member. To make your marriage blossom, avoid the five dysfunctions of a team by developing trust, working through conflicts, staying committed to team decisions, holding each other accountable, and keeping track of team goals.

The Most Important Ingredient to Keep Your Marriage Strong

Seven Blessings of a Jewish Marriage