The Yiddish Are Coming 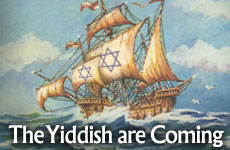 Shep some naches and read about America’s Jewish Founding Fathers.

On July 4, U.S.-ians across our great land are picnicking on hot dogs, potato salad, apple pie with little American flags – and futzing with fireworks (very Goyish). True, our Founding Fathers were Gentile, but without MOTs, batty old King George would’ve cleaned up on his colonies instead of “losing” them.

Yes, we Jews were on the scene, fighting and funding American Independence. Forget the apple pie! A true commemoration should be the blueberry blintz!

Forget the apple pie! A true commemoration should be the blueberry blintz!

True, Christopher Columbus got the credit. Also true, the debate about his Yiddishe roots still rages, but a few things we know for sure. If it weren’t for Jewish gelt, Chris would’ve been playing with his boats in some bay in Barcelona. Luis de Santangel, the Jewish confidante of King Ferdinand and chancellor of Aragon, with relative and royal treasurer Gabriel Sanchez, convinced Queen Isabella that finding a sea-route to the Indies was a good thing --and loaned the royal treasury 17,000 ducats [about $20,000], so Columbus could travel. Repaid? Feh! With the Inquisition! The day before Columbus sailed, the last Jews were expelled from Spain.

Meanwhile, had it not been for Jewish navigator, Luis de Torres (a Converso, baptized the day before sailing to escape the Inquisition), they may have landed who-knows-where. (Actually, they did. The Indies it wasn’t.) At least he made sure to be the first European to set foot on American soil. But there’s more. Columbus also brought along five other Jews, including, who else? A Jewish doctor (Maestre Bernal).

Finding and funding it is one thing. But staying? The brilliant Jewish team of Barsimson and Levy deserve a thanks! Jacob Barsimson, (the first non-Converso to “step foot” in America) and Asser Levy were two of 23 Jews who arrived in New Amsterdam from Holland on September 7, 1654. And the tsouris started. First, the captain of their ship, the Sainte Catherine, sued them for freight and food. As if this meshuggas wasn’t enough, in this New Land of religious freedom, Jews weren’t “chosen” to become burghers or guard the stockade of New Amsterdam. Plucky Levy stood guard anyway! And he was finally admitted to the Burgher Rite, making him the first American Jewish “citizen” in 1657.

And so the American Jewish community was founded!

Meanwhile, Colonial values were “Jewishized.” In the mid-1600s, the Puritans in Plymouth Colony, in Massachusetts, and New Haven took many of their civil and criminal sanctions – from the Hebrew Bible. The New World then was founded in large part, on Mosaic Law.

In revolutionary terms, the name Sheftall stands tall. On December 2, 1735, the first white child and first Jew born in Savannah, Georgia was Mordecai Sheftall. The philanthropist was appointed Commissioner General of Purchases and Issues of the Georgia and South Carolina militias and – what else? – dipped into his own pocket when they “ran short.” Captured by the British twice, he was released in a prisoner exchange. But then, the Sheftalls gave body and gelt. So much so that the British put a price on Mrs. Sheftall! When her husband was captured in Savannah, she fled to Charleston, South Carolina, home to the largest American Jewish community, just before the British arrived, and nursed smallpox victims, preferring to face an epidemic to an English rifle.

True we had a few troubles with this crowd, but Jews were big machers in the Revolution. There were about 2,500 Jews in America in 1776, several hundred of military age. The majority of eligible males participated in the war. Every adult Jewish male in Charleston, South Carolina joined the fight, so much so, Captain Richard Lushington of Charleston formed “the Jews’ Company.”

“First Jew In South Carolina To Hold Public Office And To Die For American Independence” opens the inscription on a commemorative stone in Charleston to honor Francis Salvador, who was the first professed American Jew elected to public office as delegate to the first South Carolina Provincial Congress (1774). When a South Carolina republic was established and he signed and stamped the new currency – at least it wasn’t from his own bank account. He was killed by Cherokee loyalists in 1776, the first Jew to die for his new country.

Who among us hasn’t heard of Haym Salomon, the great and generous, patriot? The Polish-born Jew (1740), was a secret agent in British occupied New York City. After fleeing to Philadelphia in 1778 , his Yiddishe kop helped rescue the Continental government’s coffers. The fortune Haym Salomon lent to the Continental Congress was never repaid, and when he died in 1785, he was bankrupt!

In Chicago there’s a statue linking George Washington, Salomon (and Robert Morris), with the words "...The government of the United States which gives to bigotry no sanction to persecution no assistance." Washington was so enamored of Jews he was almost ?... a lantsman. He directly commanded 40 Jewish soldiers.

What happens when you cross a Levy and a Washington on Christmas night? You get a trip across the Delaware! Moses Levy (1756-1826) was the first Jew in the U.S. to be admitted to the bar (1778), a member of the Pennsylvania legislature, and a judge. At the outbreak of revolution he joined the Continental Army and was selected to cross the Delaware with General Washington on Christmas night, 1776, to fight in the Battles of Princeton and Trenton. Upon his death in 1826, the Philadelphia Bar asked its members to wear a black arm band.

Colonel Issac Franks was Washington’s Kissinger – with guns, a different accent, and forget the knighthood. Later, Franks’ Jewish home in Germantown Pennsylvania, (#4782 Main Street – if you want to drop in), became a temporary “White House” for Washington who, on his way to the Third Continental Congress in Philadelphia, was side-tracked by the yellow fever epidemic. The two remained friends, and Franks became the first Jew to have his portrait painted by Gilbert Stuart.

Ah, but there was “the relative!” The colorful David S.Franks. After enlisting in the Massachusetts Regiment he had the mazel to become an aide de camp to Benedict Arnold and took major heat for keeping bad company. He, too, was arrested, then acquitted. Still not satisfied, he requested a court of inquiry. He was completely exonerated, held high diplomatic positions, was given a promotion – and granted 400 acres of land! True, it worked out, but next time your mother tells you “sleep with dogs and wake up with fleas” – listen.

The Seixas were some family of menshen. In late August, 1776, when the British were approaching New York, Rabbi Gershom Mendes Seixas of Congregation Shearith Israel, closed the synagogue and safeguarded its ceremonial objects, displayed to this day. He was also the first native-born Jewish clergy in the U.S, and one of 14 clergymen participating in Washington's first inaugural (1787). His brother, Benjamin Mendes (1748-1817), was one of the founders of the New York Stock Exchange. Son, David, established the Deaf and Dumb Institute in Philadelphia and was among the first to discover efficient ways of burning anthracite coal.

One of the most courageous mothers of the American Revolution was Esther Hays of Westchester, New York. Her village was burned by the British, yet she refused to disclose the whereabouts of patriots driving cattle through British lines. Among them, was her seven-year-old son, Jacob. Jacob and her other son Benjamin grew to be machers, and Benjamin’s grandson was Arthur Hays Sulzberger, the late publisher of The New York Times. Had there been no Mama Hays, the “Gray Lady” would be “no lady.”

What’s the first thing you do when you win? Eat! OK, cater! In 1788, when the Constitution was ratified, according to The Book of Jewish Lists, Philadelphia went all out to celebrate. A kosher food table catered by one Isaac Moses was laid, and enjoyed by distinguished Jewish celebrants, including Gershon Mendes Seixas of New York’s congregation Shearith Israel.

And so, on this July 4, it is only fitting that we scarf down those blueberry blintzes – and quote the words President George Washington wrote in a letter on August 17, 1790 upon the opening of America’s first synagogue, Touro, in Newport, Rhode Island:

"May the children of the stock of Abraham who dwell in the land continue to merit and enjoy the goodwill of the other inhabitants. While everyone shall sit safely under his own vine and fig-tree and there shall be none to make him afraid."

Have We Gone to the Dogs?
It Takes A Lot Of Faith To Be An Atheist
How Instagram Brought Back This Nostalgic Soup
What Makes Eli Run?
Comments
MOST POPULAR IN Jewlarious
Our privacy policy