The Jewish Ethicist: When to Blow the Whistle 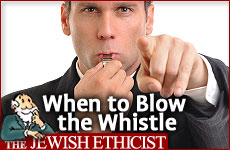 Saving others from loss doesn't have to come at your expense.

A. A number of readers wrote with variations of this valid question. Due to restrictions of time and space, each column can deal with only one aspect of a question; the aspect I related to was the one most relevant to the asker. But the one you raise is equally important and we will discuss it now. I emphasize that everything in this column refers only to causing monetary harm, and does not necessary apply when an employer's activity involves danger to life.

Any time we witness wrongdoing, we have a responsibility to intervene. The first responsibility is to the wrongdoer. Even if the crime is a totally victimless one such as a ritual transgression (for example, desecrating the Sabbath), we have a responsibility to reprove the wrongdoer, to remind him of his religious and ethical obligations and help him return to the proper track. This is the essence of the Torah commandment of reproof: "Surely reprove your fellow, and don't bear sin towards him." (Leviticus 19:17.)

Another aspect of the responsibility to protest is the problem of condoning wrongdoing, as mentioned in the previous column. Anyone who is present when wrongdoing takes place and fails to protest may be seen as condoning the wrongdoing and being to some extent complicit in it.

Again, this can apply even in a "victimless crime." We could view this as a responsibility to ourselves, to decisively disassociate ourselves from sin.

Above all, there is an ethical responsibility towards the victim. The Torah commands, "Don't stand idly by the blood of your neighbor" (Leviticus 19:16), thus creating an affirmative duty to protect others from harm. This above all creates a general ethical obligation to warn someone if he is being defrauded. (As we have mentioned in previous columns, disclosure is proper only if it is necessary for protecting the interests of the victim and doesn't cause disproportionate harm to the perpetrator.)

However, all of these obligations have their limits. Just as we don't have to incur significant bodily danger in order to save others from bodily danger, likewise a person doesn't have to incur financial loss in order to save others from financial loss. That means that if you are not personally involved in the wrongdoing, you are exempt from warning others if it involves personal loss – especially if it is irretrievable personal loss.

Even though a person is obligated to protest wrongdoers, and anyone who doesn't protest and has the ability to protest is liable for that transgression, even so a person is not obligated to spend money on this. Therefore it is customary to take a lenient approach to transgressors, when there is a fear they may harm our person or possessions. (2)

Sadly, experience shows that so-called "whistle-blowers" usually suffer great personal loss and anguish. They almost invariably lose their jobs and in many cases lose their careers. Therefore, while it is certainly praiseworthy to protect people from fraud as soon as possible, I generally advise people to think through the consequences very carefully before they take such a far-reaching step. The essential first step is to make sure that you yourself are not participating in any wrongdoing. Usually the next step is to try to disengage yourself from the morally toxic work environment, by finding a new job. For most people, only then it will be practical for them to contemplate righting the wrong by blowing the whistle.

From Pain to Joy1 min read

Praying for My Soldier5 min read