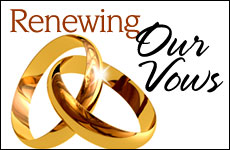 Shavuot gives us the opportunity to step out of our hectic lives and rekindle the passionate love between us and God.

Marla and Steve were high-school sweethearts who got married with the whole town in attendance. It was a dream wedding, and their smiles as they gazed at each other under the wedding canopy radiated absolute bliss.

After many years of children and bills and taxes and layoffs, Marla and Steve were still smiling, but...Life had gotten in the way. There were days when they barely said a few words to each other before collapsing in bed, exhausted. There were times that they argued, that they let each other down. It happens, you know.

Steve was surprised to come home from work one day to find Marla standing in the living room, gazing longingly at something in her hands.

"Honey, take a look at this," Marla said. Steve came over to see the picture Marla was holding and he felt his heart catch in his throat.

"Look at us," she whispered softly. "Remember how we stood together, 24 years ago, and became man and wife?"

"Remember those dreams and hopes? Remember how we felt, what we thought about?" she pressed him.

"I feel like we've drifted," she said sadly. "How about we do it all again?"

Steve looked at his wife and smiled. It was a wonderful idea -- a symbol of renewal, of recapturing the love and commitment they had shared together so many years prior. And as they renewed their marriage vows before a small, joyous crowd of well-wishers, Marla and Steve felt more connected than ever before.

This week, on the holiday of Shavuot, the entire Jewish Nation is invited to attend the "Re-Nup" of the year, where we renew the vows we took at the marriage ceremony on Mt. Sinai over 3000 years ago. No tuxedo required.

Every Jewish soul stood at the foot of that majestic mountain. The wedding was perfect -- down to the flowers. The "Groom," God, as it were, united in total harmony with the "Bride," the Jewish People, for better or worse, through good times and bad. There were lightning bolts and celestial pronouncements that left an indelible impression on every soul in attendance. We were completely in love and radiated with infinite hopes and dreams. Our hearts beat with one singular purpose: to devote ourselves to God and serve Him by keeping His Torah and mitzvot.

And then...you know, Life gets in the way. Kids, work, bills, taxes, sometimes it's hard for "spouses" to make time for each other. Our connection with our new Better Half became tenuous, the love began to fade. Sometimes there was just no time to spend even a few minutes fulfilling the hopes and dreams that had so rosily reflected in our eyes when we stood at that blazing mountain. Sometimes there were barely a few words we mumbled to God all day, if any at all.

"I'm about to go into a meeting, God. If you could just give me good health, a decent living, and let my kid win the wrestling championship, that would be great. Talk to You later!"

"On the weekend, I'm really going to read that new Jewish book and bring a little spirituality into my life. I promise!"

Like Steve and Marla, we get caught up in the vicissitudes of life and gradually we become like two strangers living in the same house. Except with God, the distance is caused by us; His commitment to the relationship never wavers.

It's time to renew our vows.

Shavuot gives us the opportunity to step out of our hectic lives and celebrate our anniversary by rekindling the deep, passionate love between us and God and recommit ourselves to the relationship.

It's a chance to reflect and reconnect with our Beloved. It's a time to bask in the sweetness of our relationship and to treasure the precious wedding gift, the Torah, that He gave us at Mt. Sinai. Far more than a cheesecake fest, Shavuot is a once-a-year opportunity to celebrate with God and remind ourselves of our pledge to be His cherished nation. For richer, for poorer.

Holy Cheesecake: Why We Feast on Shavuot

Shavuot: A Message to My Son

What is the Purpose of the Torah?
It Takes A Lot Of Faith To Be An Atheist
How Instagram Brought Back This Nostalgic Soup
What Makes Eli Run?
Comments