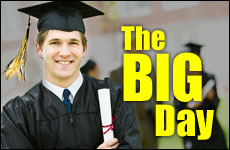 My brother was the little train no one thought could. Did he ever prove everyone wrong.

Extreme sleep deprivation can cause people to turn into emotional wash buckets. But I don't think that's why I found myself crying as I watched my brother walking down the aisle in his graduation processional. I may have just spent the entire night driving from Detroit to NYC to be there for the ceremony, but there was so much more to the overwhelming emotions flooding me at that moment. I was watching my little brother bedecked in his gown, six-sided velvet doctoral tam perched on his head, colorful hood draped over his right arm, beaming with pride and joy as he headed to the place of honor he so deserved.

Josh was the little train that no one thought could. Josh had metamorphosed from a boy who couldn't last a week in elementary school without getting suspended to a man who embraced challenge after challenge, completing one of the most rigorous academic marathons in an accelerated program. In six short years, he transformed himself from someone who didn't have a GED, to one who has a Doctor of Jurisprudence from a Top 50 Law School. So when he turned to the box seats his family occupied, and waved exuberantly at his biggest fans, all I could do was assume a ramrod straight military posture and give him a teary-eyed full salute.

I thought of Josh living for five years in the mystical city of Safed. Not really attending school, he was a free spirit, playing guitar on the mountaintops at sunrise, and sunset, and doing all the other "stuff" that come along with that lifestyle. Many thought he was a lost cause, destined to sell hookahs to tourists, peddle homegrown herbal remedies, or find some other dead end job. And to prove them right, he had a string of dead end jobs for years.

But I also remember the day he resolved to never allow his lack of education to define the rest of his life. With the unwavering support of his wife Karen, a woman who always saw more in him than anyone else, he enrolled in a GED program with people many years his junior, and began the journey that brought him to Lincoln Center on this fine Monday morning. It was a journey that wound its way through sleepless nights, thousands of library hours, super-gluing himself to his chair, and more coffee than Columbia produces in a year. But Josh took it with superhuman effort and focus. Today was his day, and we were going to enjoy it to the max, whooping loudly as they called his name, inviting him to the stage to receive his hard-earned diploma

The best part of the day was yet to come. After the ceremony ended, most of the family went back to the house to prepare the graduation party/BBQ, while Josh and I went on a special mission. Josh has a father-in-law without whom there wouldn't be a Doctor of Jurisprudence. This man patiently taught him to write an APA paper, tutored him in math for his GED, and showed him how to effectively research a topic. For many years he opened his Manhattan home to Josh, who would often stay in the city so that he could get more schoolwork done instead of taking the hour and a half commute back and forth from his house. He would cook Josh hot meals, set up his bed, and treat him like his son.

Josh's father-in-law wasn't able to make it to the graduation ceremony; he was at work at his busy dentistry practice just a few miles from Lincoln Center. But that didn't mean that Josh couldn't bring the graduation to his father-in-law. Still dressed in his cap and gown, we stopped in a midtown mini-mart to get a bouquet of flowers. Then Josh surprised his father-in-law, giving him flowers and a copy of the ceremony program with a beautiful note in it. He eloquently and effusively thanked him for making his graduation possible.

His father-in-law was enormously appreciative, expressing his gratitude for the gesture at the party later that day. As the festivities died down, Josh told me that "the whole day was not really complete until we went to say thank you. It made a great day that much sweeter."

We can embrace life and struggle mightily to recreate ourselves.

During the long drive back home, two things struck me about the days events. The first was the recognition of our ability to completely redefine ourselves at any point in our lives. So often we take a habit, character trait, or weakness we have and write it off as "it's just the way I am!" I'm not a morning person. I don't have time for learning Torah. I'm not good with kids. I love gossip. I'm fat.

But we don't have to accept those premises as reality. We have complete control over those choices, and we can create the person we want to be. God says it best: "I have set before you life and death, the blessing and the curse. Choose life!" (Deut. 30:19) We can embrace life and struggle mightily to recreate ourselves and become a different person than we were last year, the year before, and the year before that.

The second idea that hit me was that life is enjoyed so much more when we are grateful. The more we show appreciation, the more we expand our circle of experience to include others, which creates an even greater joy.

I may not have a doctorate in jurisprudence, but my brother taught me how prudent it is to judiciously create new realities for myself, and how joyous it is to live life with constant gratitude. I rest my case.

A Shelter of Belonging: How the Sukkah Can Connect Us to Each Other

Six Steps to Facing Your Fears

The Right to be Forgotten

The Twin Towers of Light

How Do I Figure Out My Life’s Direction?
It Takes A Lot Of Faith To Be An Atheist
How Instagram Brought Back This Nostalgic Soup
What Makes Eli Run?
Comments
MOST POPULAR IN Spirituality
Our privacy policy