Lessons From My Father 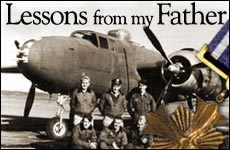 The most important life lessons I learned are ones that my father never actively tried to teach me. He simply lived them.

I've been feeling a lot like Mark Twain lately. It was Twain who once said that when he was 17 he couldn't believe how foolish his father was, and when he turned 21 he was amazed at how much his father had learned in the short course of four years.

That's me -- only at 39. Because the undeniable truth is that some of the most profound and enduring lessons in my life I learned from my father.

This may not sound like earth-shaking news. But when you consider how different my father and I are, and how we agree on almost nothing, it is amazing -- even to me -- that I could make such a statement.

My father is a living war hero, though you would never know it by simply talking to him. Nevertheless, his accomplishments during WW II were many. He flew over 70 combat missions as a B-25 pilot, was wounded, shot down, and once had to land his aircraft without wheels. He was awarded, amongst other medals, the Distinguished Flying Cross, the highest honor you can earn as a pilot. And he accomplished all this between the ages of 19-21. From where I stand, that makes him a war hero.

My father, however, would tell you something different. In fact, he would be the first to deny -- indeed deny emphatically -- that he is a war hero of any kind. Oh sure, he loves sharing humorous anecdotes about fun and frolic during his stint in the U.S. Army Air Corps. But when it comes down to questions like, "How did you get the guts to fly all those combat missions knowing you may never return after each of them?" he gets quiet.

"Well, son," he once told me, "we never thought about that. We just knew that we had a job to do and we did it. That's it. The ‘heroes' were my buddies who never made it home. Besides, that was a different life, a different time." End of conversation.

But my father's military service is even more heroic still. He had family connections that gave him the opportunity to sit out the war comfortably and safely in a defense plant in the United States. He had great pressure from his family to take the job. He said he needed a day to think about it.

When his horrified parents asked why he enlisted, he said simply, "Because I want to defend my country."

That afternoon, without telling anyone, he went down to the Induction Center and enlisted. When his horrified parents asked why, he said simply, "Because I want to defend my country."

Growing up around someone who thinks like that -- and acts on it -- has a profound effect. I learned a lot about preserving humility while achieving great heights, and about being willing to sacrifice for something greater than yourself. Few people in my generation and younger understand -- truly understand -- what it means to go to war, to stand up and defend what is precious to you and be willing to lay down your life for it. But my father understands, because he did it.

My father's example touched every aspect of my life. I became a more humble and dedicated student, ballplayer and son. I have been patriotic all my life, long before it was fashionable to be such. I decided as a kid that if war and the draft ever came, I'd volunteer, just like my father. To this day, I deeply believe in serving our country and would willingly die to defend it.

My father's war experiences also endowed him with a quality that was powerful lesson to me as a boy: the quality of command. My father was always in control of situations, giving orders. I used to complain to my siblings how dad never seemed to have left the cockpit of his B-25, how he still thought that he is the pilot in command of his crew and their mission.

Still, my dad taking charge gave me a sense of security. I always felt that whatever the situation was, I didn't have to worry. Dad would know exactly what to do. Maybe it did not always pan out, but his example of leadership was very comforting.

Today, as a husband and a parent, I can appreciate how difficult command really is. We all want to give the same strong, assured image my father always did. But when it gets down to the tough situations and decisions, being the first pilot in the cockpit is neither an easy nor an enviable position. Knowing that and having experienced it in my own life makes me respect my father even more.

HARD WORK AND NEVER GIVING UP

From a mainstream corporate point of view, my father's work career has not been a tremendous sustained success. He had his own business that failed, and then went from one job to the next most of the rest of his adult life.

But I never viewed him as a "failure." To the contrary. I always admired that during 50-plus years of working, he always had a job. And if he lost one, which happened often, he immediately started searching for another. He has never once collected unemployment.

Most of my friends, myself included, have at one point in our young work lives collected unemployment. But not my father. He always said, "As long as I am able to work, I will." And he's never given up trying. Not even today at age 79.

As a kid, I always admired my father's commitment to working to support his family and his unwillingness to accept what he believed amounted to a handout. His values of self-sufficiency and dedication to family are in too-short supply in America today. My father had five kids and a wife to take care of, and that was his responsibility, his "job.”

For many years, he took jobs that he didn't like. After his ad agency went out of business, my father sold automobiles to earn a living. Selling cars on a lot is hard, exhausting, cut throat work. You're on your feet 8 to 10 hours a day. You're competing with other salesmen who are generally high school educated 25-year-olds and being managed by a guy 15 years your junior who's always trying to squeeze more sales out of you.

My father is far from perfect. But he has a depth of wisdom and experience that I can't find in my peers.

In the middle of that harsh environment, there was my dad -- who had fought a war, earned a degree in electrical engineering from Purdue, worked as Vice-President of Sales at a classical music station in New York and was an accomplished pianist. He had to put up with being talked down to by people with half his intelligence and kow-tow to younger managers who had no respect for who he was or what he had done. But he endured all that for years to take care of his family.

This notion is lost today. We search for the "perfect job" and are unwilling to work at one that we consider "beneath us." We'd sooner move back home with our parents. Fortunately, I saw a man whose choice of job was shaped by his commitment to support his family. It is an example of selflessness that has never left me.

Today's world does not value parents and grandparents. Society sees the elderly as out-dated and antiquated. Judaism, however, has a special reverence for older people, according them honor and respect. This is borne from the fact that Judaism sees the elderly as a generation closer to the giving of the Torah at Mount Sinai, and thus closer to the spiritual source. They have something of value to teach, and we in the younger generation should listen.

This is not to say that older people are perfect. My father is far from that. But he has a depth of wisdom and experience that I can't find in my peers.

Many people say that I am a loyal friend and that I see things a little black and white, a criticism I don't particularly mind in today's age of moral relativism. Friends also say that I have deep moral and spiritual beliefs and am willing to buck the norm to defend them.

If any of these things are true, it is because of my father and the example he set. Like Mark Twain, I've realized that with all his imperfections, my father is still one of the greatest teachers I've ever had. A teacher whose lessons I am trying to pass on to my own children