Taking a Stand against Iran 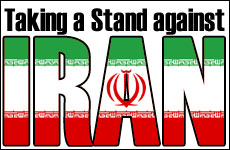 New Canadian legislation provides a template for how to hold Iran accountable for its genocidal threats.

Irwin Cotler, the former minister of justice and attorney general of Canada, member of Canadian parliament and co-author of this piece, has introduced legislation in Canadian parliament called the "Iran Accountability Act." While it expressly holds Iran to account – for its genocidal threats, nuclear ambitions and domestic repressions – it can also function to hold any signatory to the Genocide Convention to account.

All signatories to the 1948 Genocide Convention (including the United States) have a responsibility to prevent genocide – and to punish incitement to genocide – that they have largely ignored in the case of the world's greatest threat. The IAA, while a Canadian initiative, is a template model as to how to fulfill these responsibilities and take a stand against Iranian criminal actions.

We were in Geneva when the President of Iran, Mahmoud Ahmadinejad, stepped to the podium at the United Nations and delivered an address at a conference ostensibly aimed at fighting racism. With that speech – fettered with anti-Semitic comments and rooted in the very intolerance the Durban Review Conference was supposed to be combating, the whole delivered on the day of Holocaust remembrance in Geneva – the use and abuse of the United Nations reached a new, shameful low.

Ahmadinejad belongs in the docket of the accused, not the podium of the United Nations.

President Ahmadinejad is a man who incites to hatred and genocide in violation of the Genocide Convention's prohibition; who is engaged in the massive repression of the rights of his own people – particularly the Baha'i religious minority of Iran; who pursues the most destructive of weaponry in violation of UN Security Council Resolutions; who is complicit in crimes against humanity through genocidal terrorist proxies; who assaults the basic tenet of the UN Charter; who presides, as president, over the parading in the streets of Teheran of a Shahab-3 missile draped in the emblem "Wipe Israel off the Map" while exhorting the masses with cries of "Death to Israel"; who denies the Holocaust as he incites to a new one; who warns Muslims that if they recognize Israel, they will burn in the umma of Islam; and who has used the podium of the United Nations General Assembly to invoke classic anti-Semitic tropes reminiscent of the Protocols of the Elders of Zion.

Such a person belongs in the docket of the accused, not the podium of the United Nations.

And yet the danger of a genocidal, nuclear and rights-violating Iran did not begin with President Ahmadinejad and will not end simply with the completion of his tenure. The supreme leader of Iran, Ayatollah Ali Khamenei, stated that "it is the mission of the Islamic Republic of Iran to erase Israel from the map of the region."

Indeed, when he delivered his most infamous incitement – that Israel should be "wiped off the map" – President Ahmadinejad made it clear that he was simply repeating what "the Imam said" – at once grounding his hateful prescription in the words of former supreme leader Ayatollah Ruhollah Khomeini, and invoking religion to confirm the obligation.

Let us be clear, however, that the great civilization of Iran – and the people of Iran – are not the ones targeted by this legislation. To the contrary, the bill takes as its premise that these peoples are increasingly the object of Iran's human rights violations. It is in their best interest that the international community hold Iran's leaders to account.

As Edmond Burke cautioned, it is clear that this evil will triumph unless good people do something to stop it. This template Iran Accountability Act would ensure precisely that.

The IAA divests Canada from investment in Iran. It establishes a mechanism to monitor incitement to hate in Iran, and would render the most virulent inciters inadmissible to Canada. It freezes the assets of those that contribute to Iran's nuclear or military infrastructure – as well as its machinery of hate. It uses the framework of the international community – Canada's bilateral relationships and the United Nations – to bring Iran to justice through recognized principles of international law. And, similar to a recent American legislative proposal, it targets Iran's dependence on imported petroleum – so long as the incitement continues.

The IAA makes it clear that diplomacy targeted solely at Iran's nuclear threat mistakenly ignores the terrifying and vilifying context in which that threat operates and, however inadvertently, sanitizes the genocidal incitement at its core.

We hope that the US government and Congress look closely at this bill. A dual statement from both Canada and the United States would send a clear signal to Iran that while we are open to engagement, we will not acquiesce in incitement to genocide and other crimes against humanity.

A Tribute to Senator Moynihan
Lessons from the Book of Jonah
Where Are We? The Body, Brain, Soul Problem
Dr. Sheila Nazarian’s Escape from Iran
Comments
MOST POPULAR IN Current Issues
Our privacy policy
Aish.com Is Looking for Great Writers