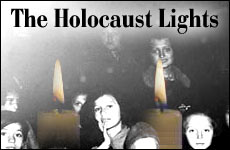 Thirteen pairs of eyes, huddled in the barracks. The sun has almost set.

Ollendorf, Germany. The skies were leaden, the winds strong and fitful. The trees were shedding their leaves at a rapid rate, so that streets newly swept had to be swept again. Leaves and bits of litter danced haphazardly on the wind's back.

It was a dismal scene, certainly not one calculated to warm the broken hearts of the Jewish prisoners working in the munitions factory. About a thousand Jewish women labored there. Supervision was constant and harsh. From time to time a female S.S. supervisor would make a surprise inspection; these visits usually ended in heavy punishments for us.

On this gray autumn day, a piece of exciting information vas whispered in my ear.

"I've gotten hold of candles -- Shabbos candles. Do you want to light them, Miriam?"

I stared at my friend. She smiled, saying, "Don't you believe me? Shabbos candles! I found some wax in the department where I work. I melted it down in one of these boxes -- and here they are. Shabbos candles!"

My heart soared. Shabbos lights, in the very midst of the darkness that pressed in on us from every side! In the center of the arctic menace, a tiny pinpoint of light and warmth -- the Shabbos flames.

In that instant, I forgot the S.S., forgot instruction manuals, arms and missiles, forgot the cold and the whips and the starvation rations. I forgot the image of the loaded gun that was never far from my inner eye. In short, I forgot where I was. The whispered secret I had just heard had the power to spirit away the ugly munitions factory and everything in it.

"Well?" my friend asked. "Do you want to light the candles?"

I cut her off. "I'm afraid of the stick in the hand of my Father in Heaven. I intend to fulfill my obligations as a Jewish woman.

That night, my friend smuggled her treasure to me. There were two simple candles, concealed in a long cylinder. I clutched them to my heart, feeling almost as if I had found my lost child, snatched out of my arms many days before -- as if I had found a portion of my own heart that they had stolen away.

What power did those candles have? How were they were able to ignite such a flame inside me?

What power did those candles have? How were they were able to ignite such a flame inside me? I had no explanation. I only knew that I sensed the souls of all the righteous women through the ages reaching out to me through those candles. Perhaps, too, I saw my mother's covered face, and felt her spirit illuminate my subdued and broken heart.

I hid the candles in my bag -- a collection of rags, actually, in which I occasionally managed to store a crust of bread for some sick friend. There were still two days until Shabbos, two days of unremitting gloom. But those two days seemed infused with the light to come -- the light of Shabbos. At last I understood our Sages' words: "Zachor es yom haShabbos" -- Remember the Shabbos, remember it every day. If you come across some delicacy that will not spoil, buy it in honor of the Shabbos. I had no delicacy, no special food for Shabbos, but I had something very valuable indeed -- my holy Shabbos candles.

Friday came. In my room, 14 Jewish girls had completed the day's work and were preparing to welcome the Shabbos Queen. The room was unfurnished except for a single old chest and our cots. I placed the candles atop the chest. I wanted to give all my friends the opportunity to share in my mitzvah by answering "Amen."

The time for candle lighting approached. It was the lovely hour before sunset; the western skies were already stained crimson and purple. Today it seemed seven times more beautiful than usual, as though the sun itself had decided to adorn our room in honor of the Shabbos before sinking out of sight. A ray of sunlight wandered into the room and rested for a moment on the candles. It lent them a golden glow, making the simple homemade candles seem taller, nobler. Even as I trembled, the ray trembled, too, and moved on.

Thirteen pairs of eyes fixed themselves on me. Some of them reflected the fear we all shared -- the fear that the enemy would intrude on our precious sanctuary. But every eye shone with the fire that had been kindled in every heart. Each one of us knew how closely her own being was bound with the lighting of those candles. We were ready for anything.

"Just like my mother used to do," I heard someone whisper behind me.

I stepped up to the candles. "Just like my mother used to do," I heard someone whisper behind me. I sensed rather than saw the way the others nodded their heads, their throats choked with tears.

I struck a match, and lit the candles.

I passed my hands over the candles and was about to bring my fingertips to my eyes when, suddenly, heavy footsteps sounded in the corridor. We recognized those footsteps. They belonged to our S.S. supervisor. Our hearts stopped.

Quickly, I covered my eyes and recited the blessing. "Blessed are You... to light the Shabbos candle." I remained where I was, hands over my eyes, pleading in a strange, strangled voice, "Master of the Universe, You know that I did not do this for my own pleasure or honor. I did it to honor You, to honor the holy Shabbos, so that everyone would remember that You created the world in six days and rested on the seventh."

The supervisor flung open the door. With a single glance she took in the entire scene. We all stood frozen in a silence that seemed shatterproof. As I continued praying with covered eyes, she stood silent, astounded.

When I removed my hands, I heard her issue a sharp order. "Go outside to the waiting truck!"

The other girls hurried to obey her command, with the S.S. woman following close behind. I was left alone in the room. I looked at the candles. "Will my lighting these candles lead to all my friends being carted away to who-knows-where?" I wondered, near despair.

The flames burned brightly as my lips moved in soundless prayer. I felt as though all of history's good women were bearing my prayers directly to the Holy Throne. And then peace returned, and I knew with certainty: My friends would not be harmed because of these holy candles.

Slowly, I walked outside to join the others. A short distance away, I saw the parked truck. I tentatively made my way toward it. Just as I arrived, my friends appeared from behind the truck, bearing loaves of bread.

Their faces were serene as they explained, "She ordered us to take these loaves to the kitchen."

Uncontrollably, I burst out in words of thanks and praise. "Blessed is He Who performed a miracle for me on this spot!" As the sages taught, "The messengers of a mitzvah are truly not harmed."

I lifted my eyes heavenward. The sun had not yet sunk beneath the rim of the horizon. A last stripe of light lingered at the western edge of the sky, as though to proclaim the miracle. Then, its job finished, it disappeared -- and the Shabbos Queen descended on the world.

From "She Shall Be Praised" (ArtScroll)

Shabbat Candles: Lights of the Soul

Shabbos in Vietnam
Vayelech 5783: Regret and Repent
Rabbi Sacks: Focus On the Important, Not the Urgent
Put Your Foot Down: Are Human Feet Poorly Designed?
Comments
MOST POPULAR IN Shabbat
Our privacy policy
Aish.com Is Looking for Great Writers