The Jewish Ethicist: Bottom of the Barrel 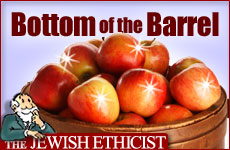 The fine line between decorating and misrepresenting merchandise.

Q. My store sells fresh produce in transparent boxes. In order to make the fruit more attractive I always put the nicest ones on top; the less attractive ones are on the bottom where everyone can see them but they have to look.

A. Your situation touches on a number of guidelines presented in the mishna and Talmud for ethical selling practices. These are discussed in the mishna at the end of the fourth chapter of tractate Bava Metzia.

When a seller represents produce as coming from his own field, he may not mix it with produce from another field of lower quality. Everyone understands that a reseller purchases produce from a variety of growers, but he still may not "game the system" by purposely buying only low-quality produce.

So the very fact that you mix high- and low-quality produce in the same container is not a problem. Everyone understands that you have a variety of produce, and when produce is packaged it is common to mix qualities so that each customer gets his fair share of the better and worse produce.

The sage Abba Shaul was against "convenience packaging", which in his opinion raised prices. But the Sages saw nothing wrong with this; if the customer is willing to pay more for convenience packaging then it is permissible. However, if only the beans on top of the display are cleaned from debris, then the customer will likely assume that all of the produce is clean, and be misled into paying a higher price for the inferior produce.

The Talmud explains further that decorating utensils is forbidden only if it is used to make old utensils appear new. But decorating any utensil to make it more attractive is permissible.

Your question is intermediate between the cases in the mishna. On the one hand, you are putting the best produce on top; this is similar to putting the cleaned beans on top of the bin to "steal the eye". On the other hand, since the box is transparent any person can see the "bottom of the barrel produce" underneath; perhaps this is like decorating the produce, making it more attractive rather than trying to mislead the customer.

The answer to your question ultimately depends not on you but on your customers. If almost all your customers are sophisticated shoppers who are well aware that they have to peek on the bottom of the box, and the way you package makes it easy for them to do so, then you are just making your produce attractive. This would be especially true if all merchants adopt this practice, as the previous mishna mentions that mixing is permissible where it is customary.

But if there is a significant minority who are misled into thinking that they are obtaining a uniform container of produce like what they see on top, then this is a case of "stealing the eye," as the mishna explains.

I have often suspected that this is a deceptive practice, meant to deceive the careless shopper. But perhaps I am just an unusually careless shopper. The way to find out is to take a little survey of your customers and see how many peek at the produce on the bottom of the box. If you see one who doesn't, remind him to look so he can be sure he is satisfied with what he is getting.

Based on your survey, you can decide for yourself if your practice involves misrepresenting your produce or merely making it more attractive.