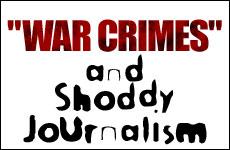 Browsing the Israeli press can provide a broader and more informed picture of events in Israel than the narrower and sometimes slanted international media coverage. Indeed, Israel's press is hardly monolithic with a variety of competing political narratives and a penchant for self-criticism, so much so that many of the most negative stories appearing in the international press are first broken by the Israeli newspapers.

Unfortunately, Israeli journalists, like their Western counterparts, also have their own biases and journalistic lapses. Such is the case of a recent Ha'aretz story alleging "war crimes" and serious ethical failures on the part of the IDF in Gaza. Predictably, many international media outlets, including the The Guardian, The Independent, Australian, and Globe & Mail, to name a few, repeated the allegations without bothering to do any rudimentary checks.

Separately from Ha'aretz but only a few days later, The Guardian published its own claims of evidence of alleged Israeli "war crimes" (repeated in Australia's The Age). Online videos and accompanying articles accused Israeli forces of using human shields, deliberately firing on Palestinian medical staff and indiscriminate killing of Palestinian civilians with unmanned aerial vehicles, as well as claims that Israel had used a variety of weapons in "illegal ways." (See section below for more on The Guardian.)

Both Ha'aretz and The Guardian are guilty of shoddy journalism. But the international press is hardly any better. Instead of checking the facts on such a highly contentious issue, publications simply repeated the allegations. Had they done a modicum of research, they would have uncovered numerous flaws. Melanie Phillips, for example, examines Ha'aretz's pieces:

There are precisely two charges of gratuitous killing of Palestinian civilians under allegedly explicit orders to do so. One is what even Ha'aretz made clear was an accidental killing, when two women misunderstood the evacuation route the Israeli soldiers had given them and walked into a sniper's gunsights as a result. Moreover, the soldier who said this has subsequently admitted he didn't see this incident - he wasn't even in Gaza at the time - and had merely reported rumour and hearsay.

The second charge is based on a supposedly real incident in which, when an elderly woman came close to an IDF unit, an officer ordered that they shoot her because she was approaching the line and might have been a suicide bomber. The soldier relating this story did not say whether or not the woman in this story actually was shot. Indeed, since he says 'from the description of what happened' it would appear this was merely hearsay once again.

It is important to note that none of the testimony was about what the soldiers did themselves, but rather of what they heard or saw other soldiers do. It is also important that what was reported seems to fall within the realm of aberrations by individuals during war against a cruel enemy hiding behind civilians, not a systematic loss by the army of its moral compass.

The second piece of context is Dani Zamir, the head of the program, who had the soldiers' words transcribed and published. A story in Haaretz on Thursday said that in 1990 Zamir, then a parachute company commander in the reserves, was tried and sentenced to prison for refusing to guard a ceremony where "right-wingers" brought Torah scrolls to Joseph's tomb in Nablus.

The allegations were rebutted by other IDF soldiers interviewed by YNet News:

A Paratroopers Brigade soldier who also participated in the war called the claims "nonsense". Speaking on condition of anonymity, he said, "It is true that in war morality can be interpreted in many different ways, and there are always a few idiots who act inappropriately, but most of the soldiers represented Israel honorably and with a high degree of morality. "For instance, on three separate occasions my company commander checked soldiers' bags for stolen goods. Those who stole the smallest things, like candy, were severely punished," he said. "We were forbidden from sleeping in Palestinians' beds even when we had no alternate accommodations, and we didn't touch any of their food even after we hadn't had enough to eat for two days."

Numerous other similar testimonies from IDF soldiers were published, not only by YNet, but also in other Israeli newspapers and even personal blogs of soldiers themselves. Yet these were ignored by the agenda-driven reporting of both Ha'aretz and The Guardian.

THE GUARDIAN: JUDGE AND JUROR

Melanie Phillips has produced a thorough and devastating debunking of The Guardian's stories, videos, commentary and editorial. She points out:

Phillips takes apart the three videos, including one in which we are told as a fact that three young brothers were used by the IDF as human shields. She notes:

Most ludicrously of all, the video shows what it solemnly states is an Israeli army magazine found in one of the destroyed houses showing a picture of one of the brothers bound and blindfolded before he said he was stripped to his underpants and used as a human shield.

Rub your eyes. Operation Cast Lead lasted from December 27 to January 18. Are we supposed to believe that the Israelis managed to publish during that time a magazine with a picture of a boy they had captured during that same operation? And then left it lying around in the rubble - miraculously without so much as a tear in its pages – for him conveniently to find it?

As further evidence that The Guardian chose activism over journalism, The Jerusalem Post  reports that in a letter The Guardian sent out to blog and Web site owners, calling for them to support its work, the paper said the Gaza film clips were meant to "add weight to calls this week for a full inquiry into the events surrounding Operation Cast Lead, which was aimed at Hamas, but which left over 1,400 Palestinians dead - around 300 known to be children." Guardian Films then asked the bloggers to link to their "Gaza War Crimes" page.

The appeal, sent by Mustafa Khalili, who is one of those credited by The Guardian for the Gaza content, was inadvertently received by the ZioNation blog, which blew the whistle on The Guardian's partisan political activism.

The Guardian is carrying out a blatant and systematic campaign of demonization against Israel that goes well beyond journalistic norms.

The Jerusalem Post even points out how the paper has apparently been selective in its willingness to publish responses from supporters of Israel criticizing what they say is The Guardian's extreme lack of balance and proportion. Bennatan publishes a very eloquent response to The Guardian that was removed from the paper's Comment is Free blog site.

The Guardian's behavior cannot be allowed to go unanswered. Using the resources above, please send your considered comments to The Guardian - letters@guardian.co.uk

Perhaps because for many commentators it's only permissible for the Jews to have a state and an army if that state and that army comply with standards of behavior far higher than that required of other states, including their own. Any failure to live up to these standards tends to be taken as evidence of the basic illegitimacy of the Zionist enterprise.

Of course, serious allegations of unethical behavior on the part of Israeli soldiers should be investigated and any wrongdoers held to account. Indeed, the IDF top brass has already initiated its own investigations. However, the media circus surrounding the cases above are yet another example of the lengths to which the international media and Israel's detractors will go to in order to promote the false image of a ly unethical or possibly evil IDF.

And this disgusting cartoon from US syndicated cartoonist Pat Oliphant is, sadly, a pointer as to the direction that things are heading for Israel in the face of this barrage of allegations and demonization. From media stories such as those above to cartoons portraying the IDF as the new Nazis, it is only a short step to the total delegitimization of Israel itself.

Death to Free Speech in the Netherlands
Bechukotai 5782: Divine Retribution
Behar 5782: Working to Live or Living to Work?
The Wholeness of Being Broken
Comments
MOST POPULAR IN Media Objectivity
Our privacy policy