Return to the Palace 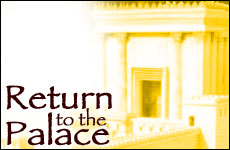 A love story of a People and their Land.

It had once been an architectural and cultural treasure; an imposing edifice of white marble and gold that was breathtaking in its beauty. The edifice had been surrounded by exotic tropical gardens watered by fountains and streams. They said that the fragrance of the flowers in that garden had been so overpowering that for miles around people had no need for perfumery.

The edifice and the gardens had stood at the very heart of the Capital City. No accurate descriptions remained of what the City had looked like, perhaps because no language contained words that were rich enough or descriptive enough.

The flowers were so overpowering that for miles around people had no need for perfume.

The edifice had been the Emperor's residence. He had resided in the inner precincts of the edifice surrounded by his courtiers. No one had ever been into the inner palace, it was His home. Once a year however, on the anniversary of his coronation the Emperor would open up his home to his loyal subjects. On that day all of the gates would be opened wide and his subjects would be allowed to meet the Emperor and view the royal precinct.

Suddenly the good days came to an end. The Emperor's enemies overran the City putting it to the torch. The Emperor went into exile with his family and his people were forcibly repatriated to far off lands. The enemy hated what the City and the palace symbolized and above all else it wanted the City to remain a desolate wasteland.

For the time being their desire was satisfied and the magnificent palace, the gardens, and the City ceased to exist. A barrier of barbed wire and concrete was erected at a radius of 100 square miles around the City by the enemy forces with their headquarters located on the site of the Emperor's palace. A Royal Proclamation was made by the Rulers of the enemy that any member of the vanquished people caught in the City or its environs would be put to death on the spot.

Generations passed and the wounds of war healed; the enemy forces guarding the approaches to the City went home and the barbed wire fences were removed. The Royal Proclamation made by the Rulers at the time of the conquest was revoked and instead the absolute right of the People to return to their City was recognized.

They sang ballads expressing their nostalgia for their City & Emperor.

Historians commented that this final action was the Rulers' wisest move and greatest victory because it was now legal for the People to return to their City but few of them bothered to do so. What generations had waited for was now reality but after centuries of long exile the People took this new reality in their stride. They were happy in their far-off lands and few of them had any desire to leave their comfortable homes to go and make a reality of their ancient national dream; it was much easier to remain dreaming. They still talked of returning and they still celebrated the great anniversaries; they sang ballads expressing their nostalgia for their City & Emperor but the words remained just words.

As is wont to happen, a new generation was born. The young people got impatient with their elders' passivity and murmurings of "let's return" began to be heard. These murmurings were initially dismissed as the irresponsible behavior of hot-headed youths, but the murmurings grew into definite plans and rumors began to filter down of people returning to the City and rebuilding the desolation.

Yet more years passed; years of unprecedented prosperity and freedom for the People. The City was slowly and surely arising from the ruins. Many of the ancient, prophetic sights and sounds returned to the streets. There was a sense of hope for a renewal of all the City's splendor.

Yet most of the People chose to remain in exile; the prosperity and quality of life that were available to them in their places of exile were nonexistent in the City.

Imagine the future, as the momentum builds and the intensity of events increases to biblical proportions. The Moshiach arrives triumphantly to Jerusalem to the sound of cheering crowds, accompanied by the greatest rabbis of our generation. He appears on all the major networks, CNN, BBC, ABC, inviting all Jews to return home.

At that point each of us must be prepared to ask: Am I ready to come join? Am I ready to give up my home, my business, my car, for the Dream of millennia?

I am reminded of an old story:

A nice Jewish family finishes the Passover Seder and they start singing, L'shana haba'a b'Yerushalayim -- next year in Jerusalem. They sing full of joy and enthusiasm. Suddenly the mother starts crying.

"I don't want to live in Jerusalem. It's too hot there. Life is good here, so why leave?"

The father comforts her and says, "Don't cry, dear, it's only a song."

Tisha B'Av is upon us. Once again we will go through the motions of mourning, and once again we ask the Almighty to return us to our land and to rebuild his Holy Temple.

Do we mean it? Do we want it? To bring the Moshiach, we must truly desire that reality. May it be speedily in our days.

The Lost Art of Prophecy
Should I Break Up, Get Engaged or Keep Dating?
Time Is Your Precious Commodity
A Constant World in Flux
Comments
MOST POPULAR IN Tisha BAv
Our privacy policy