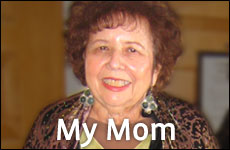 My mother blessed me with the ability to say amen to both life and death.

My mother, Marilyn Lederman, died suddenly last year in Florida at the age of 78 from what the doctors believe was a heart attack. She was in bad health for a few years, but the doctors never said that she had a life threatening condition. This may sound strange to say, but after losing Koby, my 13-year-old son, to terror, I thought losing my mother wouldn't be so traumatic. Instead I have discovered that there is always room for another grief. Each pain has its place.

Maurice Lamm in his book Consolation tells us that the word mother, ima, in Hebrew, is a root for the word emunah, faith. Our mother is the person who gives us our faith in the world, by the way she transmits her attitude about life. In many ways, she determines our bedrock attitude -- if we will look to the world as one that doesn't give enough or as a world that enriches us each moment.

I always felt that here was somebody who really appreciated me and had faith in me.

My mother loved the world. She loved to sing and laugh and have a good time. My mother loved a good party, and she gave me faith that the world was a good place. As she got older and was in bad health, I tried to call her in Florida everyday, not just out of duty, but because when we spoke, I always felt that here was somebody who really appreciated me and had faith in me. She was my biggest cheerleader.

The word amen is also connected to the word for mother. Amen is the ability to bless life, to say life is good. That is what propelled my husband and me to go forward after Koby's murder by Arab terrorists in Israel. We had been given a sense that life is blessed, no matter how difficult and painful, and we wanted to make sure that our other children understood that. That life did not have to defeat you, that it could still be wonderful.

My mother said amen to life.

Ima is also a connected to the word for truth, emet, the ability to see the inside of something. We also learn this from our mother. What is her truth and how does she see the truth? My mother was not afraid to share her truths. The day before my mother died, we had a long phone conversation about Koby. She told me that she had been on line at the post office. She was talking to a stranger and he asked her how many grandchildren she had. She said that she had six grandchildren and then she said, "No. You know what? I have seven. One was murdered in Israel by terrorists. He was trapped in a cave and stoned to death." She was able to share that truth although it is explosive and difficult.

I miss my mother's voice. Our mother's voice is the voice we internalize, and it is important that it be a voice of love, of caring, and of support so that when we face our own difficulties we can hear that loving voice inside of us, the one that says: this too you will survive.

I carry my mother's voice into my work with survivors of terror, those whose mothers or fathers or sisters or brothers were murdered. Our goal is to allow people in pain to feel cared for, understood, so that they are able to reveal their deepest pain and fear and joy, their truths. Then it is possible for bereaved people to again say amen to life.

Outside my front door after my mother died, a bird built a nest around the bare light bulb. I haven't yet seen the bird but it's probably a Palestine Sunbird, bright, busy and colorful, like my mother, somebody who believed in joy. My mother blessed me with the ability to have faith in God and the world, to have the courage to express my own truths, and to say amen to both life and death.

This is her legacy.

Three Goals for the New Year

Back to School and Broke

My Father's Blessing
Why Are The Prayers Of Yom Kipur So Repetetive?
Ha'azinu 5783: A Time for Unity!
Twisted Thinking
Comments