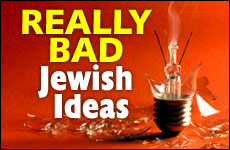 We Jews aren't always that smart.

E=MC2, the polio vaccine, the pacemaker, Bloomingdale's, Ben & Jerry's, Weight-Watchers, blue jeans, CBS – nevermind whole professions. In proportion to our population, Jewish machers "out-macher" their machers by a number only an Einstein could hypothesize. That's us. Ideas, talent, inventions, philosophy, run from us like Six Flags Banzai water slides.

But ... as with all natural wonders, once in a while, instead of flowing mightily, our ideas are a little meshugge.

Once in a while our ideas are a little meshugge.

Here's my personal list of ideas, thoughts, concepts we need like a loch in kop. I give them an F for Farfoilt (really rotten)!

1. "JEW-T's." Before you get all twitchy, I adore kitsch. I even look kitsch. (Bette Midler meets the Annies – Hall, and Little Orphan.) "I'm a Soccer Mom," or "I'm a Harvard Dad" T-shirts when Jr. just made his first boom-boom is bad enough. Now, Jewpsters (hip Jews) can display our ethnicity boldly in 100% cotton Ts with "catchy" kitsch across our reverent chests like: "Hebrew School Droupout," or "Gelt Digger." All of which will not only warm any Jewish mama's heart – but signal any potentials, "Shmendrick Alert!" Unless of course, they're wearing, "You looked better on J-Date."

2. BAD, BAD BARK-MITZVAH ETIQUETTE. For many it's sacrilegious, but celebrating a pooch's coming of age is, well, "koolish" for some "Newish" MOTs. After all, they figure, isn't little Shmooie, your spaniel, more loyal and selfless "family" than Tanta Shprintzel who appropriated all the leftovers (nevemind centerpieces) at your Bar Mitvah? Doesn't he jump when you say, "Shpring!" and lie down at "Shlof!" So some figure why not make a simcha when he reaches dog-hood at age two? (If you wait til he's 13- human, you may have to combine the "simcha" with the shiva.) Pooch pals are sent blue and white invites to celebrate at the Bark Mitvah's home, pet salons, even some synagogues. Guests feast on pet-friendly Star of David cakes, mark the Bark Mitzvah certificate with their paw print (in non staining ink), and, woof their tears during prayers. A perfect gift for Shmooie? The "pen" is traditional – except for its squeaky chewablity. (Sometimes Shoomie's parent will request donations to animal shelters – a good thing.) And of course, there's the doggie bag filled with Star of David tennis balls, and commemorative Shmooie yarmulkes.

You know you're too Jewish if: 1. You're a master at Jewish Geography; 2. You have a Pavlovian response to "Sheket b'Vakasha!" (hey!) 3. Your family owned at least one BMW, or Mercedes, with a "Support the IDF" sticker in the rear windshield.

You know you're not Jewish enough if: 1. You don't get what Borat is REALLY saying; 2. All of your ancestors died peaceful, non-Holocaust-related deaths; 3. You don't "get" the Big Tsimmis over Sarah Silverman or Ben Stiller.

"Too Jewish," "Not Jewish Enough" ... "Yes. In the hands of some cool MOTs, Mother Goose became hipsterical fodder. From Golde Lox, a shnorrer with the chutzpah to complain, "too frum," "not frum enough" or "just the right frum" when she barges into the Bearansky's, we can take a lesson in laughing. (And all these years, I thought she was a blond shiksa parolee, casing caves.) So ... when are we Jews "Just right?" Not e-mailing "too" vs. "not enough" Jewish humor – for starters.

4. KABBALAH, L.A. Even if you're not a follower, a 4,000 year old spiritual movement rooted in Jewish mysticism, deserves some serious due. After all, it's said that Abraham, Moses, Shakespeare, and Freud did. Which is not to mean that your regular Ashley, Moishe, Jose, and Fifi can't. But when Kabbalah becomes the A-listers "zone" (somewhere before hotel room bashing, and after Botox), we've got a whole Newish "cult"- invasion going on. And Esther, nee Madonna, is the K-LA queen, with Demi Moore, and the Beckhams, among others, "zoning" in. But why be skeptical? Hey, even the rich, famous, and bored, after acquiring, well, everything, may be seeking clarity, purity, and the "light." Especially among the dim bulbs. So can we really fault member Britney Spears confusing Kabbalah with Hinduism in a Newsweek interview? A natural mistake when the "light" is blinding – from all those hi-rent candles and K-Bling.

5. THE GOY GAMUR. The terrific news is, the goy gamur – Jews who outgoy the goys – has become way uncool. Some MOTs like, Ethan Zone, Sasha Baron Cohen, Sarah Silverman, Seth Rogen are thankfully wearing their frizz, shnozzes, and names with pride. And they've become major hip. Ah, but some are still pruning and circumcising noses and names. For the goy gamur, I say, enough with the straightening and shortening! Take a lesson from Dirty Dancing's talented Jennifer Grey after she had "a nose job." When she goyishized her nasal cartilage, she lost her cache. Let it be, Ralph Lauren Lifshitz! Change your brand from Polo to Mekhaye!

6. POLYUNSATURATED. Like most Americans, Jews have replaced the "wealth" of our cuisine with "health." Of course, in our case, there's only one food group of merit: Fat. Sugar, not so much. But whether we're talking chopped liver, chicken soup, or for frying, our beloved shmaltz, in particular, has gotten a bad rap – and been replaced. Yes. The Newish, hoping to live longer than Abraham, have turned to soy, "Who Would Believe it's Not Schmalz?" (No one who's conscious), "sour cream" made entirely from oil of addax, and veggie latkes fried in Pam. So why is it, that some Newish Jews who've turned counting carbs into a career choice, have chest pains and can harvest enough fat to fuel Zimbabwe while their 100-year-old zaydes are doing the hora in the Hebrew Home ? Walk a little around Williamsburg, Brooklyn, and you'll see it. While some youngish Jews are ferdrayt from the no fat, jogging and dripping, some very oldish Jews are sitting and dipping -- schmaltz on a bissel challah, happily downing yolks and telling jokes.