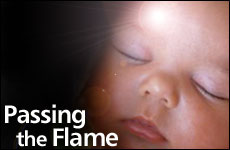 Marking my son for life.

Young parents today are bombarded with choices for their babies, not the least of which is circumcision for baby boys. For a Jewish father and mother the choice to circumcise goes beyond any practical arguments and into the territory of the heart and spirit.

For me, choosing to circumcise my son did not take a lot of debate, but it did take a lot of strength. Bris literally means covenant. Bris Milah is the covenant of circumcision. It was given to us and practiced from the time of Abraham, and has been passed down for generations upon generations. The biblical law is found in Genesis (17:12) where God said to Abraham, "This is My covenant which you shall keep between Me and you and your seed after you -- every male child among you shall be circumcised."

When my midwife suggested substituting a "spiritual" circumcision -- a ceremony without really cutting -- some place deep inside of me responded firmly that this is something my tribe has been doing for thousands of years.

So eight days after giving birth, I placed my precious bundle, my firstborn, my son, into his father's devoted arms for his bris. My baby was handed to my mother and mother-in-law. That sweet baby was tenderly passed from one set of loving arms to the next: my husband's stepfather, Alexander; my brother; and finally my father, the baby's sandek (the one who holds the baby during the bris). In the short minutes it took to carry that baby to the rabbi who would perform the ritual, worlds spun inside my mind.

My father, my brother, and Alexander had all traveled from California to the nearly 9,000 foot elevation of the Rocky Mountains. They came for that one morning to participate in welcoming this little soul into this world and into a place in his nation. But there was more than their travel that passed through my mind that morning.

Alexander was a Holocaust survivor. His entire family had perished at the hands of the Nazis. Alexander had left home when he was a teenager. Although he'd been raised in an observant family (and I had not), he and I would often debate the meaning of life, and he would even suggest that there is no God. I knew that he left his family because of the stirrings of the Nazis. Alexander was quite the businessman, even as a young teenager, and made a living as a mover together with a friend using a horse and cart. One day, he was in a theater when the house lights came on. Nazi soldiers stormed in. The men were told to stand against the wall on one side of the theater, women to the other side. Then the men were told to drop their pants. There was no hiding who was a Jew, and Alexander was taken away.

He survived, and now he had traveled to be a part of this ritual, the very thing that nearly cost him his life. How can I even put into words what that said to me? Still it made me think: "I am marking my son for life." But what was I marking?

I remember reading an article that made a very striking point. In this world of "mutual consent" and "do-whatever-you-want," here is a rite of passage that says in essence, we are taking this most personal and private part of you, making it public, and announcing, "What you do with this matters." I knew I was marking this child as a part of his nation -- for all its strengths, for all its frailties or imperfections, and for all its thousands of years of continuity and history. This simple ritual was something bigger than I could have guessed, with repercussions beyond my comprehension.

Here I was, still tired from a difficult birth, handing my baby over for his bris. No mama wants her precious newborn baby to be hurt in any way, not even for a minute. Yet, here were all the men closest to my heart -- my husband, my father, my brother, Alexander, and dear friends -- all with sweet tears of joy in their eyes reassuring me it was fine. And it was fine. They carried the baby so lovingly. They placed him on a beautiful white satin pillow. The mohel, the rabbi who performs the bris, started to sing, "Baruch HaBah..." Welcome. Welcome to the soul that has just come into this world, so full of promise and hope, so treasured, and so blessed.

After the bris, as the rabbi held the baby, I saw something that I didn't expect to see. As the tension broke and our guests sang, the mohel rocked my son in his arms. He was almost dancing with that newborn, surrounding him in a magic touch of comfort. This was not just a ritual for the mohel. This man had such tenderness for my baby -- one of hundreds, maybe more, that he'd circumcised. Why did this surprise me? Maybe because usually a procedure like this would be done clinically and doctors don't often take the time to be tender. Now that I've been to many more, I see not only kindness for the infant at a bris, but for the young fathers and mothers as well.

How a new mother longs to get her new baby back into her arms to nurse. He's been initiated into the tribe. This baby counts and will be counted among his people. But for now, he will rest in his mama's arms, nursing at his mama's breast -- until the next rite of passage, and then the next; all in the continuity and the beauty, all within the context of being part of this nation.

Laya Saul is the author of the award winning, life-wisdom book for teens, "You Don't Have to Learn Everything the Hard Way," and several children’s books. She teaches at Sharei Bina Girls Seminary in Tzfat where she lives with her husband and two beautiful teenagers. You can find her blog at www.auntlaya.blogspot.com.

The Figure in the Doorway

These Lights We Kindle
It Takes A Lot Of Faith To Be An Atheist
How Instagram Brought Back This Nostalgic Soup
What Makes Eli Run?
Comments