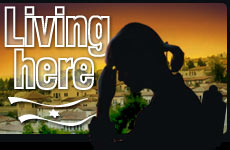 On a bus in Jerusalem, all eyes followed the girl who suddenly broke down and cried.

I was on the number 1 bus early one evening a few weeks ago, waiting to leave the stop at the Western Wall, when a girl around eighteen got on and started rummaging through her purse for the fare. Standing there next to the driver, head slightly bowed, she was groping for her wallet with one hand and with the other was holding open her purse to the window’s waning light. I was looking at her absentmindedly, thinking of other things, when out of the blue her impassive face squeezed up into a sudden, totally unexpected grimace – for a second it looked like laughter – and she began to cry.

This girl’s paroxysm of emotion, in its startling nakedness, was exposed embarrassingly before all of us silent strangers, then before we knew it she’d gotten control of herself. With upraised chin and face composed, she turned into the aisle to find a seat.

All eyes followed – including mine. She was well dressed, well put-together. A seminary student, probably – American or British – with glossy dark hair gathered back elegantly in a velvet clasp at the nape of her neck: not the kind of person who’d enjoy making a public spectacle of herself, that’s for sure. I vaguely remembered now having passed that girl as I left the plaza – I was pretty sure this was the same one – but at the Kotel, the Western Wall, crying’s not unusual, and in any case, everybody’s on a different wavelength there from the daily norm. All the ethereal, uninhibited faces... If you let yourself get distracted from your own praying and peek around surreptitiously to the right or the left as you stand at the Wall, you can get an uninvited glimpse into a whole line-up of strangers’ concealed, innermost worlds, and you know you shouldn’t be looking. Bitter complaining, desperate anguish, lowly begging, fragile hope, a heart’s desire, fervent dreams, the demand for an explanation from God for one’s disasters, angry entreaty, joy unbound, gratitude, relief, or – this is pleasant to behold – the face of a human being engaged in some sublimely pleasurable communication with her Creator. Usually all these secret faces vanish instantly, spontaneously, when the women pressing up against the stone turn around to confront the world.

A wave of grief reared up so wildly inside me that I couldn’t hold on.

The bus was packed. There were no more seats. A kerchiefed Yerushalmi woman in her sixties who was sitting next to me also craned around to watch as the girl made her way through the standees, and she clucked her tongue and shook her head. “Must have gotten bad news,” she muttered sadly. I thought to myself, right, there’s only one thing that makes a person sob uncontrollably like that in public, and the disturbing picture appeared in my mind’s eye of myself in an American Airlines terminal at JFK some years before. I’d just arrived on an El Al flight from Tel Aviv and was searching for the connecting flight to Los Angeles, when suddenly, to my own surprise, a wave of grief reared up so wildly inside me that I couldn’t hold on. My suitcase dropped to the floor, and I heard my own voice rising forth hoarsely in bewilderment, anger, disbelief: “Daddy! Daddy!” I saw passersby staring warily, but they were just distant objects on the fringe of my awareness. “Daddy!” I moaned, like some sort of wounded creature. “Daddy!” How long did I stand there crying like that, as if I would thereby force on my father’s part some reply?

My seatmate and I, and several other passengers, were still twisted around, following this girl with our eyes, not yet self-conscious about our curiosity; no more than a minute had passed since the girl had gotten on. We watched as another girl, a petite blond near the back – she’d been waiting there, apparently – gave a knowing look as the other came down the aisle and stretched out one arm unobtrusively. They clasped hands. At her friend’s warm touch of understanding, the first girl’s face fell in on itself again, and once again she was swept away by some powerful, measureless inner tide. She didn’t bother herself now about people staring. She just stood there crying openly, face tipped back slightly as the tears streamed down.

I imagined myself getting up now and consoling her, too. “I know what you’re going through,” I wanted to tell the bereaved girl. “I know what it’s like to get the message when you’re so far away. That’s just the price of living here. But believe it or not, you will feel better one day. You really will. This too shall pass.” That’s what I’d say, or some such nonsense, but of course I wouldn’t do any such thing. I sat in my seat and turned around to face front.

A few minutes later I twisted around and the girl was still weeping. “I’m going back to talk to her,” I said to the Yerushalmi woman, as if she’d expected an explanation.

In an undertone I asked: “Did somebody die?”

Our bus was hurtling along through the new underpass near Jaffa Gate, and by the time I had made my way through all the people, my throat had tightened uncomfortably to suppress the rising-up of some reawakened tidal swelling of my own. The girl’s eyes were shut and she was in another world, so it was the friend whom I asked, in an undertone: “Did somebody die?”

The friend looked up at me, startled. “Oh no. We’re leaving Israel tonight.”

I couldn’t quite absorb it. “What? You’re leaving Israel tonight?”

“And that’s why she's crying?”

I leaned over to the crying girl. “Excuse me... Hello?” She lifted her red and swollen eyes. “You’re crying because you’re leaving Israel?”

She frowned self-consciously, not liking this stranger’s intrusiveness. I felt like throwing back my head in laughter, and a bubble of delight and relief burst out: “How wonderful!” I exclaimed. She smiled tentatively.

As I got back into my seat, which the Yerushalmi woman had saved for me, she said, “Nu?”

“She’s crying because she has to leave Israel tonight.”

It emerged in conversation that from the profits of her work at home as a seamstress, she had bought each of her five daughters apartments in the city.

“From the day the first was born, I didn’t buy luxuries.”

“Oh, clothes. I made them. I don’t own an oven; I cook on the gas instead. Things like that.” The woman smiled tranquilly. Here was someone who had accomplished something great in life and knew it. Her eyes disclosed a quiet, unambiguous happiness.

The two of us talked some more until our gaze was drawn out the window, where Jerusalem in the twilight was darkening as we were borne along.

These Biblical Women Are the Ultimate Mother and Daughter-in-Law

The Key to Life
What Makes Eli Run?
The Tyranny of Materialism
Science Enters the Mysterious Inner World of Consciousness
Comments
MOST POPULAR IN Family
Our privacy policy