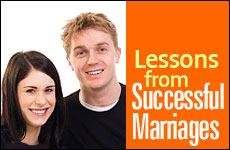 Diminish the negative and accentuate the positive.

This article is excerpted from the NY times national bestseller, "The Truth about Cheating." The author studied hundreds of men, faithful and unfaithful, to discover how women could create better relationships for themselves.

Failed couples tend to think that their failure is justified because of the spouse they married. They perceive successful couples as having an easy life, less stress, and fewer issues than what they've experienced. This is the number one falsehood of the failed couple. Successful couples shoulder just as many issues, whether they be financial hardships, work-related stress, childbearing issues, illnesses, and challenges with in-laws, but their system of dealing with it is an extremely different model, and that's what makes them successful.

Spouses in a successful marriage walk away from a fight and think, "How long am I going to be angry about this stupid issue? He's been so nice." "He's been off his game lately because he's been so stressed." "Just yesterday he did take a little extra time to be with me..."

Spouses in a failed marriage walk away from a fight thinking things like, "How dare he!" "What's he done lately to show me any kind of love?" "So what if he's stressed, so am I and isn't everyone?" or "He doesn't talk to his mother that way." This spouse doesn't make the effort to excuse any behavior by recalling some of the nice things her husband did of why he may be acting this way that has nothing to do with her.

Surely I don't mean to imply that the successful couple does nothing else but excuse a fight. But a successful couple immediately diminishes the negative, gets over the fight quickly, and the offended spouse more often than not gets a sincere apology because the other spouse is so appreciative that his mistake wasn't blown up into World War III.

Men commonly dig in to their point of view further when met with hostility and punitive actions. If a wife decides to stay angry at her spouse and give him the silent treatment and no intimacy or affection for a bit, her actions tend to do anything but get him to come around. Men tend to get angry and try to become punitive themselves when feeling punished for something they did that they've perceived as not that big a deal.

The successful couple comes back toward one another with an attitude of "I don't want to go on and on with this. Let's just apologize and please understand what bothered me." This attitude will almost always turn your husband into an appreciative spouse who can then admit to his wrongdoing as you've perceived it and even commit to giving you more of what you want in the future. The successful couple reunites, deciding that they'll take some badly needed "couple time" in the next day or so to remedy the little hiccup.

Successful couples attack problems, not each other.

Successful couples are coming toward each other because they've remembered the good in the relationship even though there's some bad, as in the failed couple's relationship. They remembered that they're married and love each other. They have to make it work and why waste the time being angry? They allow themselves to feel the love that has been built in the relationship over the years -- the positive -- instead of keeping foremost in their minds all of the hardship they've had to struggle with.

Successful couples attack problems, not each other. They view the problem as a blameless entity and don't waste time on guilt.

The failed couple is entrenched in negativity. They don't want to give each other a single break. They're sick and tired, and not because it's gone on for years -- they were sick and tired early on too. They never knew how to move through a fight, and since they held on to the fight and punished each other, they never made a resolution.

After a while there is a point at which each couple builds a history. The successful couple builds a history based largely on the happy times, the positive. The fights don't stick out so much in their memory because they weren't ongoing and punitive. The failed couple has spent years on a roller coaster and every time another fight occurs they connect the dots to every other fight that has continued to lie just under the radar.

Remember that men are emotional beings who react well to kindness and appreciation. They can say they're sorry and understand your feelings. They can do it all emotionally if given the chance, and for them that chance comes with your focusing on the positive.

Excerpted from: "The Truth About Cheating: Why Men Stray and What You Can Do to Prevent It" by M. Gary Neuman

The Courage to be Vulnerable: A Key to Intimacy

Can a Video Game Ruin a Marriage?

7 Common Mindsets to Discard before Marriage
For Every Individual, A Torah Scroll
Allegiance To The Monarch
Meet the Real You: Yom Kippur
Comments
MOST POPULAR IN Family
Our privacy policy
Aish.com Is Looking for Great Writers