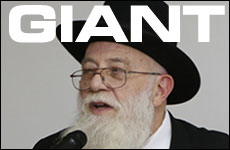 Rav Noach Weinberg wasn't born a giant. He was born a human being who took God seriously.

We look at the great Jews throughout the ages and we think: That was a giant. There was Abraham, Rashi, the Vilna Gaon, and in our generation there was Rav Noach Weinberg. But what about us small people? Perhaps we can continue what he accomplished, but can we ever became giants? 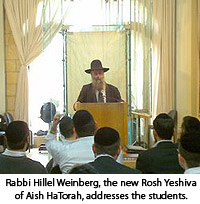 This is the opposite of what the Rosh Yeshiva tried to teach us. When he was a young student in yeshiva, he had bouts of fatigue and the doctor said that he needed to spend more time in bed. The mashgiach understood the situation and allowed him to miss parts of his learning program.

So what did the Rosh Yeshiva do lying in bed? He didn't read the newspaper. He learned the Rambam. When he came to the halacha in the Laws of Learning Torah where the Rambam says that Torah is only acquired by someone who "kills himself over it," he said to himself, "If I listened to those telling me to lie in bed, I'll never become a significant Torah scholar. I cannot accept that."

He jumped out of bed and dedicated himself to learning. He climbed level after level, until he got to the point of sleeping only three hours a day: from 12-1 at night, from 6-7 in the morning, and another hour after lunch.

If he became a giant, we can also become giants.

Rav Noach Weinberg wasn't born a giant. He was born a human being who took God seriously. If he became a giant, then we – who have no excuse to lie in bed – can also become giants.

I remember as a child, the Rosh Yeshiva would be speaking to new guys who just came off the street. He would ask them, "In how many years do you think there will be a world war? Ten years? Twenty years? Fifty years? So what are you doing about it?"

He gave over the strength and confidence that everyone can make a difference, and that we're all obligated to try. We cannot rely on someone else to do the job.

Until today, we were relying on this giant.

People ask me, "How many branches does Aish HaTorah have?" The answer is that each individual who was influenced by the Rosh Yeshiva is a branch. He has tens of thousands of branches. This is both an obligation and a privilege: Wherever we go, we can carry that flame and make a difference. And it's not just his students who are charged to make a difference. Kol yisroel areivim zeh lzeh – every Jew is responsible for Klal Yisroel.

The Chafetz Chaim asks: the Children of Israel were slaves from Egypt who only knew how to make bricks. How did they succeed in building the Mishkan, which involved very skilled craftsmanship? The Chafetz Chaim answers: Whoever said, "I want to build the Aron," Hashem gave him the knowledge to build the Aron. Whoever said, "I want to make the Paroches," Hashem gave him the ability to make the Paroches. The Chafetz Chaim says that this applies today as well. If someone truly wants to become great in Torah, Hashem will help him become great in Torah. And if someone wants to change the world, he will change the world.

The Rosh Yeshiva became a giant in Torah and also changed the world. He used to go to the yeshiva at 4 in the morning and learn until 7 a.m. Nobody knew about it except his chavrusa. He became a giant in learning, all the while saving Klal Yisrael.

For the past 50 years, the Rosh Yeshiva had another giant behind him. Before he started the yeshiva, the Rebbetzin would bring food to the Kollel where he was learning, so he would be able to learn without interruption from 5 in the morning until midnight. The Rosh Yeshiva repeated Rabbi Akiva's famous words to his students: "What is mine and yours, is hers."

A Giant of a Man

Naming our Synagogue for Rabbi Weinberg
Why Are The Prayers Of Yom Kipur So Repetetive?
Ha'azinu 5783: A Time for Unity!
Twisted Thinking
Comments