Too Modest for TV? 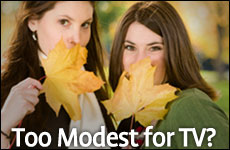 An author finds herself at the frontlines of a new generational battle.

Reprinted with permission of the author and The Wall Street Journal © 2007 Dow Jones & Company, Inc. All rights reserved

Earlier this year, I got the call that every author pines for. Wendi Wan, a producer from the "Dr. Phil" show, alerted my publisher that the daytime pop psychologist wanted to design a program around my new book, "Girls Gone Mild: Young Women Reclaim Self-Respect and Find It's Not Bad to Be Good." They would need copies straightaway, and soon I was subjected to an hour-long interrogation. To my great relief, I passed the inquest, and my appearance on "Dr. Phil" was confirmed. Yet the producers required others to appear with me, and they needed my help. And so, for nearly two weeks, Ms. Wan was in almost daily contact as I recommended teenagers who were boycotting companies with crude marketing campaigns and girls who had made a public appeal for tummy-covering clothing. Pre-interviews with these young defenders of dignity were arranged, and the show started to make travel arrangements for me.

And then, just as suddenly as Ms. Wan had appeared in my life, like Mary Poppins she floated away. When my publicist finally got her on the phone, she learned that our show had been canceled. I was disappointed, but that's show business. The next day, a woman I knew asked if I could join her on "Dr. Phil"; they were filming a modesty segment, and she had been told to corral others to appear with her. Laughing, I realized that the show was still on -- it was just happening without me. A producer later explained that "we don't typically have authors on the show because Dr. Phil [McGraw] is the expert."

Recently, the episode "Mild vs. Wild" finally aired. As it turned out, all the teenage role models that I had recommended were nowhere to be seen. The show was instead presented as a war between "wild" young'uns who wanted to look provocative and their "out of touch" parents.

I lost count of the number of times that the children portrayed their parents as clueless, frumpy or "just old." It's "just two different generations," the viewer was told again and again. One young woman suggested that her elders were "jealous" because their wrinkly bodies were no longer attractive. Finally, stepping into this catfight of his own making, Dr. Phil mused that the kids feel that the grown-ups "need to get with the times." He compared Megan, one 11-year-old girl who favored microminis, to his own college-age son, who sports a mohawk -- and even instructed Megan's parents to "lighten up" and give "her more leeway" since "she is a straight-A student."

Today many young people rebel by upholding high standards in the face of the low ones promoted around them.

But by omitting all the younger, more wholesome role models from his show, Dr. Phil unwittingly revealed how much distortion is required to prop up this media-stoked controversy. The dichotomy between prudish elders and wild young'uns turns out to be, on closer examination, largely adult dogma. Yes, many young people are rebelling--but today they rebel, increasingly, by upholding high standards in the face of the low ones promoted around them.

Bratz magazine, for instance, a publication geared toward 9-year-old girls, may glowingly showcase a "hot backless mini-dress" and fawn over the likes of Paris Hilton, but as its readers grow up, many of them are going crazy over the squeaky clean "Hannah Montana" TV series and the G-rated "High School Musical" kids instead.

Girls are told by Seventeen magazine that "you better follow these rules" so as not to "appear clingy or desperate post-hookup," and that a girl is ready for sex only if she can handle a breakup with her boyfriend soon after engaging in it. As one girl emailed me after reading this advice, "If you're OK with someone leaving you after sex, you probably don't care about him enough to do it!"

At many universities, the administration treats new freshmen to a skit that portrays sex as a lighthearted activity. But it's students, not their elders, who are trying to revive the idea that sex is significant. At Harvard, dozens of students are members of the True Love Revolution. This year, Princeton's abstinence group even persuaded the powers that be to introduce a chaste character into the play "Sex on a Saturday Night."

Sensing the makings of a more conservative generation, Phillip Longman, writing in the Harvard Business Review, warned readers in the February issue to "think twice" about touting sexually explicit video games: "Businesses that have relied on sex to sell products . . . could provoke boycotts or outright bans." Today's sexy marketing campaigns "could come to be seen as relics of a decadent past." This is what happened in 2005 when teenage girls successfully "girlcotted" Abercrombie & Fitch's "attitude tees." It wasn't parents but the girls themselves who succeeded in getting the clothing retailer to pull the shirts with sayings such as "Who Needs Brains When You Have These?"

On several occasions in recent years, the National Campaign to Prevent Teen Pregnancy has found that twice as many adults as teens answered "yes" to this question: "Do you think it is embarrassing for teens to admit they are virgins?" I now have a whole email folder filled with tales of this generational disconnect. A 19-year-old wrote to me after her mother pressured her to go to bars during the workweek. I heard from a 16-year-old whose parents think she is "Victorian" because "excuse me if sex is not my favorite dinner topic."

And then there's my favorite email, received in October: "When I was about 12," reports a 23-year-old woman, "my baby boomer mother came up to me one day after school, and appraising my typical baggy t-shirt and jeans said, 'you really ought to start wearing smaller shirts. That's what the boys want.' I of course just blushed and mumbled something like 'OK, mom.' Now that I'm older I realize that instead of just being embarrassed, I could have said, 'what about what I want?' "

These are the voices you won't hear on "Dr. Phil." But, hey, he's the expert.

This article has been condensed from an earlier version, which originally appeared in the December 21st 2007 Wall Street Journal.

Wendy Shalit was born in Milwaukee, Wisconsin, and received her Bachelor of Arts in Philosophy from Williams College in 1997. Her first book, A Return to Modesty: Discovering the Lost Virtue was published by the Free Press in 1999 and her newest book, Girls Gone Mild, was recently published by Random House. She is also the founder of the group blog ModestlyYours.com, an online forum for women who don't have a voice in the mainstream media.

Wendy Shalit was born in Milwaukee, Wisconsin, and received her Bachelor of Arts in Philosophy from Williams College in 1997. This year is the 20th anniversary of her first book, A Return to Modesty: Discovering the Lost Virtue (Free Press, 1999).

Becoming a Mother Changed How I View My Body

Holding Back Our Daughters

The I of the Beholder
Big OnThe Little Things
Chraime Egg Boil
Is Grease the Word?
Comments