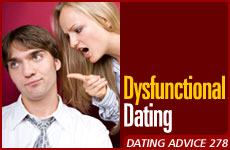 With six weeks till the wedding, mom is worried sick.

My 21-year-old daughter is very bright and popular. When she was on a day trip, she met a young man. It was an exciting outing and she returned very enthusiastic about him. He sounded like a good guy. They dated for several months, and I could see that things were becoming serious. She brought him to meet our family and her friends. She met his family and friends. And they since became engaged.

Now I am very concerned. I sense that she does not respect him. She talks to him in a very degrading, cynical manner and makes fun of him, even in front of his family members and ours. And then she acts like he's the only one who understands her. I am also concerned that he just "takes it" and only tries to make her happy, and does not ask her to treat him respectfully.

If he would speak to her like that, I would ask her to call it off. As it is, I asked her to postpone the wedding.

Another issue: My daughter is finishing school now, but appears unhappy in her choice of professions. I suggested she give it a chance, get more experience in it, but if she does not find her place, she can choose to study something else.

The background is that I was in a very abusive marriage. My daughter never really opened up about her pain or loss. If we ask her questions about her feelings, she shuts us out and says we're prying. Anytime I suggested counseling, she refused.

She went out with some guys who were not really together, trying to convince herself that it could work out. When the relationship ended, she kept trying to think how to keep it together. I think she has a really hard time separating, even if the relationship is not good. And I'm afraid that is happening now.

The wedding date is six weeks away. Do you have some idea of what I or someone can say or do?

We appreciate that you are writing with concern about the way your daughter is treating the young man she is planning to marry. Often, parents turn a blind eye to the unhealthy way their child treats a future spouse, or justify what is happening. And you are also right to be concerned that your future son-in-law seems to "take" this behavior. These two young people are unwittingly setting the stage for a potentially abusive marriage, and this is the best time to intervene to help them both.

There are a number of ways to understand why your daughter is behaving as she does toward her fiancé. Many people who grew up seeing an abusive relationship between their parents unwittingly model that behavior in their own life. They consider this to be an acceptable way for husbands and wives to interact, or they may realize that it is inappropriate but haven't had an exposure to healthier relationships to emulate.

Another possible reason for your daughter's behavior could be that she received a lot of criticism when she was growing up and has learned to look at herself and others with a critical eye. Dr. John Gottman, a renowned psychologist who has studied married couples for more than 35 years, observes that many people who are critical, sarcastic spouses doubt their own self-worth, have learned to focus on the negative in themselves and others, and have a hard time seeing or appreciating the positives. Your daughter may continually search for what's lacking in herself and her fiancé and overlook his good qualities, as well as her own.

Your daughter may also have difficulty voicing her frustrations in a healthy way. When things aren't the way she pictures them to be, she may lash out. Since her fiancé seems to "allow" her to do this by not objecting to the way she treats him, she sees him as a safe ground for venting her anger or disappointment.

Even though your daughter is the critical partner in this relationship, we share your concern that this young man isn't standing up for himself. He may not know how to stand up to her, or may fear losing her if he does. Over time, he and your daughter can become entrenched in the roles of verbal "abuser" and "victim," unless they learn how to change the way they interact.

One way to do this is through pre-marital and early-marital counseling. We believe that all engaged and newly married couples should consider participation in a program such as "Prepare and Enrich" which helps them develop many of the relationship skills that will help them maintain a loving and fulfilling marriage. As beneficial as this program is to all couples, we think it is doubly important for anyone who grew up in a home that lacked marital harmony.

In addition to improving her couple skills, it seems that your daughter would benefit from improving her self-esteem and self-image. Therapy may be the best forum to do that. As she learns more about herself and feels better about who she is, other areas of her life will also benefit.

For example, as her self-image improves, she may gain more clarity about what she really wants to do with her career. It's not uncommon for someone in her early 20s to feel dissatisfied with a career choice. Your daughter may have studied a field that was a poor fit for her from the beginning, may have discovered over time that the realities of the career are different than what she imagined, or may be having difficulty making the transition from being a student to actually working in a field. While she may agree with your suggestion to try working in that field before considering a switch, she may not yet have the maturity or tools to sort through her choices and options. In time, she'll probably discover which career suits her well, but any gains she makes in therapy can help that process along.

We also think there may be some connection with your daughter's dissatisfaction with her career choice and the way she treats her fiancé. We wonder if, just as she needs some more time to figure out what career direction she wants to take, she may need some more time to figure out what she really wants in a marriage. It would be better for her to postpone her engagement and learn more about who she is now, so that she can marry with confidence. That's certainly better than marrying before she sorts things out -- and later deciding that she's made the wrong choice or that she really doesn't want to be married at this point in her life.

For this reason, we think your suggestion that your daughter delay her wedding is a good one.

If your daughter has a hard time accepting these suggestions from you, think of someone who might be more persuasive. Adult children don't always accept their parents' advice, even though they love and respect them. A third party whose opinion and insight your daughter also respects might have more influence. We suggest that this person bring up the points we raised -- that your daughter and her fiancé are unwittingly laying the foundation for an emotionally abusive marriage, that therapy can help her address the sources of her critical and disrespectful way of relating to him, and that they can also work together to learn healthier ways to interact so they can have a rich and fulfilling marriage.

Your daughter may not accept the third party's advice, either, but you have to make the effort. Too often, we've seen family members or friends hold back from expressing their concerns about an upcoming marriage, and later regretting that they didn't speak up. If someone approaches your daughter in a loving, concerned and non-confrontational way, there is a good chance that she will listen and consider the advice. Whether she decides to postpone her wedding and get counseling now, get married on schedule and attend counseling as a married couple, or reject the suggestions, you will have done your best, and that is all that you as a parent can do.

Dating Advice #27 - Is Kindness the Key?

Dating Maze #241 - Intellectual Inequality
It Takes A Lot Of Faith To Be An Atheist
How Instagram Brought Back This Nostalgic Soup
What Makes Eli Run?
Comments