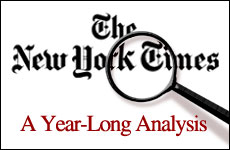 A long term study of the New York Times reveals a bias against Israel.

The last long-term analysis of the New York Times was released in November of 2007. At the time, we found that there were several disturbing patterns in how the Times reported events in the Middle East. Our conclusion was that the treatment of Israeli and Palestinian actions was so different, that there could be no question that the reporting was favoring the Palestinians rather than remaining impartial. We highlighted specific cases where headlines dealing with Israeli or Palestinian actions were written in different styles. We also noted that the vast majority of images used by the Times appears reflectively sympathetic to the Palestinians while virtually ignoring the greater context surrounding the conflict.

We have now concluded a broader survey of the Times. Specifically, we looked at 205 articles between July of 2007 and June of 2008. Using this much larger time frame, we found that our original thesis has only been strengthened. Specifically, when reviewing headlines and photographs, it is clear that there is an inherent bias in New York Times reporting about the conflict that favors the Palestinians.

Of the 205 articles we reviewed, 22 dealt primarily with Israeli military operations. In almost all of these, the Times used a consistent style. Israel or a related term ("Israeli Military", "Israeli Forces", etc.) was used as the subject. A strong verb ("kills", "shoots") was used and the object of the sentence was usually the number of casualties listed, often without any other details.

below are a few examples:

On the other hand, the Times style for writing headlines concerning Palestinian attacks is markedly different. We found that in only about 20 percent of the cases were those responsible for the attack mentioned in the headline. Much more common was the use of the weapon as the subject of the attack ("Rocket", Suicide Attack").

Below are a few examples of this type of style:

Clearly, none of the Times headlines are untruthful. On a case by case basis, they accurately summarize the events in the accompanying articles. However, when reviewing the numerous headlines used by the Times, there is clearly a pattern that places more weight on Israeli actions than those of the Palestinians. Balanced reporting requires that a consistent style be used no matter who is the initiator of the event. Ascribing the attack to an inanimate object such as a rocket over and over again indicates bias.

No matter how accurately a news story is written, an accompanying photograph may destroy all objectivity as the reader is emotionally steered away from the facts by a moving image. When images that evoke sympathy for one side in a conflict are shown in far greater numbers than those which capture the anguish and suffering of the other side, it is a clear case of bias. In our review, we counted 73 images that could be described as supporting either the Israeli or Palestinian side. Three quarters of these images evoke sympathy for the Palestinians and portray a scene lacking in context. Even though these pictures are not taken by New York Times photographers, it is a Times editorial judgement as to which wire service images should run with a story.

Take a look at the image below of the funeral for a Palestinian teacher killed in an Israeli attack that ran above the story on February 8, 2008.

The image and caption are rather disturbing. Relatives are crying over the death of a woman killed by the Israeli Defense Forces. Yet this image is rather misleading if its purpose was to illustrate the events described by the accompanying article. Several salient facts shed light on the scene in the photograph and put it in its proper context:

Why would the Palestinians launch attacks from civilian areas? Obviously in hopes that Israeli retaliation would result in civilian casualties and pictures such as the one above would be published by the media and turn public opinion against Israel. Times' readers are more likely to remember the emotional picture of the funeral for a dead teacher killed by Israel than the actual facts listed above.

Here is another example from a Times story on February 9, 2008.

The image is one portraying the deprivation of the Palestinian people in Gaza. A boy in a crowd clutches a barbed wire fence because Israel has "limited supplies to Gaza." Yet unlike the picture, the article states that Israel had reduced electricity to Gaza by less than one percent. Does an electricity reduction of less than one percent really lead to the hardship that seems to be reflected in the picture? Or is this another case of Palestinians posing for the Palestinian photographer working as a stringer for Reuters?

Below is yet another example. Before getting to the well-written, balanced article by Steve Erlanger, a reader would first see civilians clutching infants running from an Israeli attack.

The picture does a disservice to Erlanger's article which clearly puts the events in their proper context.

According to the article:

Medics at Nasser Hospital in Khan Yunis said that Sami Fayyad's wife was wounded, and that the couple's 3-year-old daughter was clinically dead.

Sami Fayyad, 30, was a fighter with Islamic Jihad's military wing. Ahmad Fayyad, 32, was a former member of the Palestinian Authority security forces. Israeli Army spokesmen said the brothers were firing on Israeli forces from alongside and inside the house. The house was hit by at least one tank shell, and Palestinian witnesses said Israeli forces, using armored bulldozers, then collapsed the rest of the house.

In a statement, Israel said blame for the deaths of the women "lies with the gunmen, who operated intentionally from a civilian environment."

Yet once again, it is the image of civilians running for their lives while holding their children that most will remember.

The news is not all bad. In our last report, we noted that certain phrases ("illegally occupied territory", "the former Palestine") appeared in the Times. We did not find these same issues in our current analysis. Perhaps the new New York Times Jerusalem bureau chief Ethan Bronner is paying closer attention to these type of issues. If so, then we hope to see even better reporting in the month ahead.

Nonetheless, even a well-written, objective article can end up misunderstood if the headlines and images around it distract from the story rather than complement it. Unfortunately, the issues of headline style and image selection that we highlighted last year are still a serious problem. The Times should make sure that:

On Journalists, Political conflict and NGOs

The Palestinian Papers & the British Press

Pallywood
Bechukotai 5782: Divine Retribution
Behar 5782: Working to Live or Living to Work?
The Wholeness of Being Broken
Comments
MOST POPULAR IN Media Objectivity
Our privacy policy