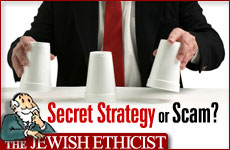 In financial relationships, the Talmud recognized the need for the highest level of transparency and accountability.

Q. I'm thinking of investing in a successful fund, but the fund manager won't reveal his investment strategy which he says is secret. Should I be worried?

A. Secret plans will always have appeal for some. The idea of such a plan may make above-normal returns seem plausible. Thinking that we are getting the better of others may even make the returns more enticing, as Scripture tells us that "Stolen water is sweet" (Proverbs 9:17).

However, the truth is that making money is hard work; a clever trick, even if it works, is almost never enough. Thus, even a successful strategy is seldom compromised by revealing its outlines. A secret strategy is often a screen for a scam.

The sages of the Talmud recognized the level of trust needed in a financial relationship and created an unusual extra layer of accountability in partnership agreements to ensure the highest level of transparency.

In general, Jewish law shuns oaths. While oaths can be a valuable way to convince pious individuals to tell the truth, they have little impact on precisely the dishonest people they are meant to catch. Furthermore, excessive use of oaths can lead to reducing the awe people feel towards them, and result in more oaths taken in vain – a transgression so serious it violated one of the Ten Commandments. So for example, one basic principle to ensure oaths are not over-used is that they may be administered only when there is firm evidence that the defendant's claim is false.

However, in a very few cases they saw the need for encouraging openness was so great that they instituted special oaths to be administered by the court. One of the most far-reaching is the "partnership oath". When one person administers the assets of another person on an ongoing basis – for example, business partners or a trustee administering the assets of a household – the rabbis allowed the uninformed party to demand an oath from the administrator even when there was no firm evidence of falsehood.

The Talmud's justification for this law is instructive: when a person has total discretion over someone else's resources, even an honest person feels justified in diverting a little for his own use, as a reward for his care. (1) This is a natural sentiment which can be conquered only by demanding constant accountability.

From a strictly legal point of view, the right to demand the "partnership oath" can be waived, like any other monetary right, and there are also a few exceptions to the rule. I'm not claiming that no money manager has the right to keep his strategy secret from investors if they agree. Rather, it is to show how the sages of the Talmud were concerned to legislate a special layer of additional transparency for cases when one person is dealing with the money of another. Evidently such transparency is an important safeguard, and I think any investor should think at least twice before waiving it.

The Jewish Ethicist: Getting Undeserved Goodwill

Finding Meaning in Hollywood
Evolution 2.0: The Coming Darwinian Revolution
Chukat 5782: Let’s Play the Blame Game!
The Sin of Moses: The Two Ways to Communicate
Comments
MOST POPULAR IN Current Issues
Our privacy policy