Celebrating the Seder With Abba 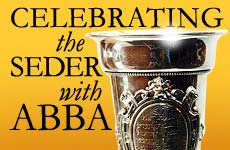 My father's enthusiasm for Passover was so contagious, that each member of our family approached the Seder in an emotional state approaching ecstasy.

American Jews who have some traditional background usually speak of "conducting" a Seder. Some use a different expression: They "sweat it out!"

My father, of blessed memory, never "conducted" a Seder, and certainly never "sweated it out." Abba (father) always "prah'vidt" -- celebrated a Seder, as he said in Yiddish. William Safire would probably say he exulted, jubilated or reveled in the Seder.

Abba was the type of Jew who feverishly anticipated Passover's arrival, and began preparations for his beloved festival long before the customary 30 days. Born in Poland, and arriving at these shores in 1919 at age 16, Abba vividly recalled (and made certain his "Yankee" wife and 3 children recalled) what it was like preparing for Passover in Biala Podlowska, a small shtetel of 10,000 Jews and 4,000 gentiles near Poland's northeastern border with Russia. The house was literally taken apart piece by piece. The straw mattresses were changed with great fanfare. The shtetel Jews were so poor, that it was usually only at Passover time that the Hebrew greeting "Tischadesh" ("wear it in good health") was heard, for those lucky enough to have new clothes especially tailored for Passover.

Abba's vivid memories of Europe never seemed to leave him for even a moment of the 72 years he subsequently dwelt in the USA. My big sister, 12 years my elder, and my little sister, 2 years my elder, and I, watched with eyes aglow, as Abba, usually late in February or early March, started taking down the special corrugated boxes marked "Pesach" in Hebrew, filled with the Passover dishes and utensils. By then, Abba had already prepared his special "Kosher for Passover sink" -- a new wooden fruit box obtained from the local market. He built it to fit perfectly in the bathtub, where he washed each Passover plate, glass, spoon, fork, knife and silver utensil with special care and heartfelt devotion.

Abba loved his Passover dishware with a passion. Each year he would, on numerous occasions, excitedly call his wife and children into his Passover "kitchen" to kvell with him over the beautiful long stemmed exotically colored glass which he had just polished to a high sparkle. (Being one of America's all time great bargain hunters, Abba had probably bought the glass for less than a nickel at Gimbel's or Macy's "double close-out basement remnant sale," long before the cellar had become the fashionable boutique it is today.)

Mother prepared the Seder meal with great care, of course, according to Abba's tastes and abundant instructions. There was a palpable sense of excitement when the Seder began, which is probably not uncommon in many homes. But Abba's enthusiasm was so contagious, that each member of our family approached the Seder in an emotional state approaching ecstasy. We truly felt the Divine presence descending.

The Buchwald family did not "read" the Haggadah, we "chanted" the Haggadah text with the special chanting melody Abba had learned in Biala. All of us were expected to master that chant, and Abba would often repeat a portion of the Haggadah if one of the designated readers missed the proper intonation while leading the chanting. Many songs were sung, often in harmony, and amazingly Abba joyfully allowed his younger children to intrude on his Biala traditions by singing the Passover songs we had learned in the Soloveitchik Yeshiva choir. Everyone was expected to lead a portion of the Haggadah reading -- even poor mother, whom my father often described as possessing the "dearest" (most expensive) Hebrew, having taken countless Hebrew Ulpan classes with limited success. Inevitably, we would convulse with laughter to tears when mother really savaged a particular Hebrew word in her assigned reading.

Each year Abba would tell the same stories -- about the old widow who opened the door for Elijah the Prophet. The sudden light startled the bearded goat who was resting in the back yard. The goat jumped into the old lady's hut, and made shambles of the table. The little old lady, who had already imbibed three cups of wine, begged the "guest": "Reb Elya (Elijah), eat, drink -- but please, don't break the dishes!" Or the limerick about Pharaoh losing his pants. It was more than fun; it was more than spiritual. It was Fantasyland come true.

When we received a "slinky" or a climbing-ladder-man as a reward for returning the Afikoman -- we children were ecstatic. (Much more excited by that gift, than the Walkman or CD disc player kids receive today!)

We danced with great fervor at Leshana Haba'a Bi'rushalayim (Next Year in Jerusalem), and sang Adir Hu and Chad Gadyah until the wee hours of the morning. In his traditional steadfastness, Abba would announce each year that if he moved to Israel (which was his lifelong dream), he would insist on celebrating two Seders, because he did not feel that he could fully appreciate only one Seder, being too exhausted from the preparations.

The last year of his life, Abba celebrated his Passover Seder for the first time without his beloved wife of 59 years. He refused to join me or my sisters in Israel. He wanted to be with his beloved Passover utensils. Sure enough, more than a month before Passover, he began his regular ritual of preparation -- letting us know at each step how beautiful things looked. And so at age 88 1/2, he celebrated together with an elderly gentleman friend of his, whom he had invited over for the holiday, and regaled him with his customs, melodies, witticisms, Torah, and the delicious food he had cooked -- the traditional Buchwald fare.

Passover without Abba has never been the same -- despite the wonderful traditions which he bequeathed to us as our legacy. When Moshiach comes, I have a sneaky suspicion that it will be Abba who will be called upon to lead the celestial Seder, and make certain that the angels sing with the proper intonations when they chant the Haggadah.

Ephraim Buchwald is Founder and Director of the National Jewish Outreach Program and Rabbi of the Beginners Service at Lincoln Square Synagogue, New York City.

A Ghostly Bar Mitzvah
The Promise Of The Land
Which Chat Are You On?: Parshas Behar/Lag Ba’Omer
Do You Like Slow-Cooked Food? Thank the Jews
Comments
MOST POPULAR IN Heart of Matter
Our privacy policy