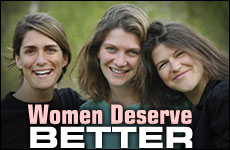 It's long past time for women to stand up for who we truly are.

Women -- teens, college students, young professionals -- deserve better. And it’s not about glass ceilings and work promotions. It’s about relationships. It’s about how men treat women. But more importantly, it’s about how women allow themselves to be treated.

Peggy Noonan perhaps put it best in a recent Wall Street Journal piece describing contemporary television shows: “You see the routine debasement of women parading as the liberation of women.”

It's not just Hollywood -- it's reality. It’s an ironic outgrowth of a feminism that tried to persuade women that they are the same as men. That suggested liberation is synonymous with promiscuity, that advocated there is no difference between a woman’s response to physical intimacy and a man’s, that we could be equally casual about it.

Young women today are recognizing the fallacy of that position. They are not casual at all. What they want is a deeper relationship, and they are waiting by the phone for that call or text message, hoping for more. And hoping. And hoping...

But they’re having a hard time finding support for their position. It’s not available at campus health clinics where the emphasis is on physical safety as opposed to emotional health (see the book Unprotected by MD Anonymous) and where this viewpoint is considered old-fashioned and inappropriate. It’s frequently not available from their mothers, themselves products of the sixties and seventies and threatened by an attack to their ideas and behavior (see Girls Gone Mild by Wendy Shalit). And it’s certainly not available from the men who, seemingly, have everything to gain and nothing to lose from this so-called liberation. (In fairness I think many men will acknowledge a certain emptiness in their own lives but since this is often counterbalanced by the ease of satisfying their appetites, we will leave them out of the equation for now.)

Our daughters feel weaker, forced to sacrifice their most private selves and thoughts in the hand of a false liberation.

In a world where hooking up occurs via text messaging in the middle of the night, women seem to be more oppressed than in the past, not less. Young women are presenting themselves at campus clinics in waves, depressed and in pain. Their relationships (I use the term loosely) are leaving them feeling empty and confused. Yet they are more afraid of the potential loneliness, the social ostracization that comes from being a "good" girl.

So our daughters feel weaker, forced to sacrifice their most private selves and thoughts in the hand of a false liberation. They are desperately seeking empowerment.

They couldn’t see their path to an alternative, more dignified way of being.

This is not liberation; it’s repression.

In a recent WSJ article, Jeffrey Zaslow cites a study at Michigan State University suggesting that 60% of college students have had a “friends with benefits” relationship. Nine out of ten “hookups” didn’t lead to dating relationships. This should not come as a surprise but "after casual sex, females are more likely than males to show symptoms of depression” according to yet another study. How many studies are necessary to confirm the intuitively and experientially obvious? Just get the girls alone and ask them.

Our daughters should be screaming, “We deserve better!” They should "take back the night." They should take back themselves. I believe we have let them down. We haven’t imbued them with a strong enough sense of their inner worth. Our daughters are so and wonderful, so precious. True power is the ability to choose -- what to share, when to share, with whom to share, on our terms, with dignity and pride intact.

In order for our daughters to be real Jewish princesses, we have to be queens and teach them how to behave with royal dignity, how to appreciate the inner self more than the outer, to have the courage to stand up for themselves, to risk temporary loneliness for a lifetime of pleasure and meaning.

True empowerment is the ability to listen to and act on our own inner voice.

Wendy Shalit tells an interesting story in her new book. After being included in a PBS program "If Women Ruled the World," the producer set up a private interview.

"We were about to set a time when, to my surprise, the producer began to explain what he wanted me to say: that a certain second-wave feminist (another guest) had saved womankind and that I, as a young woman, was grateful to her. Well, I told him, I couldn’t exactly say that, as I didn’t agree with this woman's idea that housewives were "parasites" or with a number of other things she had written...I myself did want to get married and didn't see my inability to cook as an advantage. "What you're saying," he sputtered into the phone, "isn't in the script!" "Oh, excuse me," I replied. "I didn't realize there was a script -- I thought we had all been invited to express our different opinions in our capacity as ‘powerful women.'"

There is a script and it needs rewriting. "To me it was an allegory for the experience of being a young woman in today's society. In many small ways, usually a bit more subtle than this producer's behavior, we are notified that we must 'liberate' ourselves by disrobing, 'empower' our sexuality by being indiscriminate in our choice of partners, and strive to see other women primarily as sexual competitors. But for many of us, we soon learn that this path requires repressing our ideals."

Don't be sidetracked. It's not about blaming men. If we allow anyone else to dictate our behavior, it's our fault not theirs. It's our responsibility, not theirs. That holds true for eager young boys, our female friends, colleagues and professors, feminist tomes and sometimes even our parents.

True empowerment is the ability to listen to and act on our own inner voice. True liberation is doing what's right and not being bound by societal pressures. True freedom is identifying with our eternal soul and not being confused by the voices of our temporary but very noisy bodies.

It's long past time for women to stand up for who we truly are. We deserve it.

A Life Unexpected: The Childless Woman

Praying with My Feet

In My Boots
Near Death Experience Panel
The Western Wall: The Heart of the World
Ask the Right Question: Tisha B’Av
Comments
MOST POPULAR IN Current Issues
Our privacy policy
Aish.com Is Looking for Great Writers