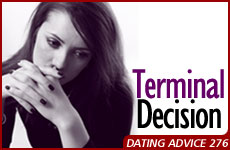 He is pre-occupied with family issues. How long should she wait?

The man I've been dating for 18 months is wonderful -- funny, smart, generous, ambitious, family-oriented, respectful. The list of positives is long. We are both in our 30s and on the verge of taking the next step. However, certain life circumstances seem to be getting in the way, and I don't know how to evaluate their impact on our relationship.

The last year has been tough. Jason's father hadn't been in good health for some time, but after we'd been dating for about six months his father's condition deteriorated dramatically. Jason and his siblings wanted to provide their father with loving care, and during the last months of his life, as he became more impaired, they took care of his every physical and emotional need.

I admired the way that Jason showed devotion to his father, and I was very supportive of him during this time. And it was clear to both of us that our courtship was on hold. Naturally, there were some days that I felt frustrated, but I understood that he was having a hard enough time balancing his family and job responsibilities.

The entire family is emotionally and physically exhausted.

Jason's father passed away a few months ago. We were just starting to live life again, and Jason told me that he was ready to move on and focus on us. Then another tragedy struck his family. Jason's young nephew was critically injured in a car accident. He has a head injury and is in a coma. Fortunately, Jason's nephew is slowly improving and the doctor's are guardedly optimistic about his recovery, but he will need extensive rehabilitation. Jason's sister and brother-in-law are emotionally and physically exhausted, as is the rest of the family. Once again, Jason and his other siblings, still grieving the loss of their dad, want to be a supportive and helpful family network.

I'm trying to be as supportive as I can, even though during the past year I clearly wasn't getting as much back from Jason as I gave to him. I like Jason's family and feel terrible about the circumstances they are facing, and I know that this is a lot for Jason to handle right now.

However, I am also a little selfish. It seems like Jason and I are right back to where were a year ago. I am concerned that he will put us on the backburner again, unconsciously (or not) using this news as an excuse. He has admitted that he's a little afraid of marriage. I want a family and can't wait forever, especially if Jason is really delaying out of fear. I'm also worried that I'm never going to be his top priority -- there's always his job, his family, himself.

If that's the case, then I feel like I have to walk away. Any advice?

It seems as though you have a very clear understanding of the problem you are facing. Your courtship isn't moving forward, and you don't know if it's because Jason can't make the leap toward marriage and is using family circumstances as a way to avoid doing so, or if marriage would have happened if he hadn't been sidelined by his father's final illness and now his nephew's long and challenging recovery.

This is not something we can answer without knowing the two of you well. But we do have a suggestion about how you can figure out where you are headed. This suggestion should make it easier for you to decide to stay with him or to move on. This is vital, because your relationship has to move forward to survive. If it continues to stagnate, it will either deteriorate, or you will leave.

Some people have a difficult time dealing with more than one major issue at a time. Jason barely recovered from tending to his dying father, is still mourning his father's death, and has now to become a source of emotional support for his sister and brother-in-law. He's grieving, concerned about his nephew's long road to recovery, and is uncertain about how the dynamics of his family will change. It's a lot for anyone to handle. On top of that, your relationship has been in limbo too long and it is time to move it to another level, and he may need clarity to be able to decide if he wants to marry you or not. And even if he does, he may need help dealing with his fears, to make the leap of faith to become engaged and married.

You must sit down and talk about how things are developing.

There's no question that the two of you must sit down and talk about how you see things developing over the next six months. We might tell someone who has different circumstances than yours to give the man she is dating more time to deal with his family situation and to continue to give him emotional support. However, we're concerned that in your case, this might mean waiting for an engagement and marriage that may never come about. So as difficult as it may be for Jason to deal with another major issue at a very stressful time, we believe that for your sake he must do so.

We suggest you saying something like this: "I'd like us to talk about something that we've put on hold for a long time because you needed to concentrate on caring for your father. After he died, we both looked forward to focusing on our courtship. Now your family has a new crisis, and I know that it's important for you to be there for them. This time, though, I think we need to figure out a way for us to nurture our relationship at the same time that we're concerned about your nephew's recovery. I don't want to become frustrated about being in limbo, or for you to feel guilty, pressured, or too overwhelmed to figure out what you want. I think that, as hard as it is to focus on things between us right now, we need to find a way to do it. "

One more thing: If Jason does pledge to move your courtship forward, it may be very difficult for him to devote the emotional and mental energy to taking this major step without someone to guide him. A third party can help him address his feelings, priorities, and goals about the many major transitions he is facing in his life, and help him acquire the clarity to deal with several issues. We suggest that he consider working with a therapist who specializes in helping individuals deal with grief and family illness.

The bottom line is that even though this is a very difficult and emotionally demanding period in his life, your relationship is not going to survive unless Jason works on his grief and his current family trauma, and decides to move forward.

We wish you all strength at this time, and clarity in navigating the dating maze,

Dating Advice #51 - Building the Emotional Investment Portfolio
Blessing on Chewing Gum
Was Rahab a Prostitute?
Extras In Our Own Epic
Comments
MOST POPULAR IN Dating
Our privacy policy