We Were All His Favorite 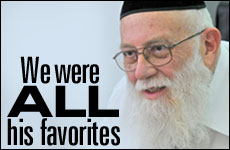 Rav Noach made everyone feel that they had a personal and relationship with him.

I felt like my heart stopped. I had just seen the email informing us that our Rosh Yeshiva had died. Then I heard the Rosh Yeshiva's beautiful words I had heard so many times before, "The Almighty loves you!" I sat with tears streaming down my face and I began to count my blessings just as the Rosh Yeshiva had taught.

We have lost a Rebbe, a mentor, a teacher, a parent and an inspiration. Yet somehow I felt this was my own personal loss. Rabbi Weinberg had the ability to make me feel as though he always had time just for me. Every time I met with him, every time I called him and every time I saw him -- the smile, the love, the reassurance, the encouragement, the slap on the face – he gave me the feeling that I was special, that I was his favorite and that he loved me the most!

I know that so many others felt this way as well. He made everyone feel that they had a personal and relationship with him. I know there are greater students of the Rosh Yeshiva, who had greater and longer relationships with him, yet still somehow he managed to give this feeling to each one of us!

I grew up blessed with parents who care about Torah and the Jewish people. They sent me to the best schools and Yeshivas. When I met the Rosh Yeshiva and I learned of Aish HaTorah's vision, I was further inspired. He had the passion, the urgency, the belief that we can and must make a difference. He made it tangible. Just as I was excited then to help make this vision a reality, I'm still excited to be doing it until this very day.

The Rosh Yeshiva taught us to be real. Real with Hashem and real with ourselves. When something happens every person has a duty to immediately ask themselves what Hashem is asking of them. He must continue to ask what is Hashem telling him? I'd heard the idea before but never had I seen someone so real with it like the Rosh Yeshiva was.

And then my father was in a terrible car accident. The Rosh Yeshiva reminded me that Hashem loves me and is talking to me and that we can help my father come out of his life-threatening coma. He reminded me to count my blessings and to ask myself what Hashem wants from me. If I could figure out the message and pray, he'd wake up. So real and so straight.

Six months later I saw the Rosh Yeshiva. He smacked me across my face (lightly) and said, "You've stopped praying!" I asked him how he knew. He just chuckled and smiled. He then reminded me that he and Hashem love me.

In July of this year I took my son Michoel to Israel just before his Bar Mitzvah to meet with the great leaders of our generation. Our meeting with Rav Noach Weinberg was perhaps the most meaningful and inspiring. He asked Michoel, "Does your father ever buy you ice cream? Are you able to repay your father's kindness simply by saying thank you? What does your father really want from you? Do you ENJOY the ice cream!" Then the Rosh Yeshiva drew an analogy of a father and a child's relationship compared with that of Hashem and His creations: 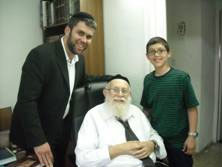 There's nothing that you can do for God. All He wants from us is to gain the pleasures of the world that He created for us. Serve Hashem with Joy!"

That Shabbos morning I spoke in Aish, London. I mentioned that we are not allowed to speak about things that will make us sad on Shabbos. However we must mention the passing of the Torah giant that has left our midst and perhaps share Torah that best describes how he lived his life.

Rav Shimon Schwab zt"l suggested that the medresh cannot be taken literally. To illustrate this point he compares it to a Rashi in Bereshis where he quotes the Talmud in Sanhedrin. The narrative goes that Cain kills Abel and Hashem tells Cain that the "bloods (d'mei in Hebrew for blood, in the plural) of Abel your brother call out to Him from the ground." Why ‘bloods' and not blood? Rashi answers that bloods refers to the blood of Abel as well as his unborn children and great grandchildren. Rav Schwab zt"l comments that when we look at a Jew, we don't just look at the fruits of his present but we also look at the fruits of his future. A few Jews died and didn't merit leaving Egypt, but had they lived they would have been the forefathers to tens, thousands and even millions of Jews.

When Rav Noach zt"l looked at a Jew, he saw the fruits of their immediate and distant future. He saw their children, grandchildren and great grandchildren. When he brought a Jew close to Torah he taught them to engage in their free will in order to make decisions and become close to Hashem. As a result his reward and merit multiplied by the thousands.

I merited to be under the chuppah of two students of Aish UK this past Sunday. The groom was on a fellowships to the USA in 2001. The bride was on a Fellowships to Australia in 2002. Today they are both beautiful, learned and proud members of the Jewish community. Tens of their friends and family have since been on Aish trips and been involved with Aish. I looked around the wedding hall and saw tens and tens of faces who have been inspired by Aish. What a palpable feeling of the beginnings of tens of thousands of Jews all engaged and inviolved with the God and the Jewish people all in the merit of the Rosh Yeshiva, Rav Noach Weinberg zt"l.

Just two weeks before the Rosh Yeshiva zt"l passed away I was in Israel for a very short visit. I went to see him for a few minutes. It was a brief and difficult meeting. He was weak and uncomfortable but his message hadn't changed! Be real with the world we live in. Open your eyes to the problems the world has and help correct them. Hashem doesn't need anything from you and can do it all by Himself but He wants you to gain the most that you can from this world. Be a part of the solution! So we enjoy, we cry, and we take the pleasure from what this great giant has taught us and from Hashem's beautiful world.

I thought to myself there have been so many eulogies, so many written thoughts and ideas, do I really have anything to add? Are my words necessary? And then I remembered...I was Rav Noach's favorite. We were all his favorite. He loved us each 'the most'. He loved me and Hashem loves me too.

Rabbi Moshe Mayerfeld was Managing Director of Aish UK until September 2018 before starting Aish New York. Born in New Jersey, he moved to Israel at age 17. Moshe received rabbinic ordination at the young age of 22, as well as a B.A. in Jewish Philosophy. He worked with troubled and at-risk youth, gaining experience in drug and alcohol abuse counselling, and helping teenagers from broken homes. Moshe joined the Aish UK staff as Campus Director, and now lectures across all age ranges.

Living with Our Souls
Why My Iranian Mother Didn’t Want Me to Become a Religious Fanatic
The Jewish History of Prague
Why the Sexual Revolution was Bad for Women
Comments
MOST POPULAR IN Rabbi Noah
Our privacy policy
Aish.com Is Looking for Great Writers