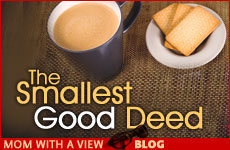 What strong marriages are really made of.

"The smallest good deed is better than the grandest good intention." – Duguet

I don't know who Duguet was or in what context he (or she?) said this, (I could probably look it up on Wikipedia but who has time?) but it is actually very good marital advice.

In the romantic poetry and prose genre, those in love speak of the rose petals they want strewn at the feet of their beloved; they speak of canopies of stars, the song of birds, the glow of the harvest moon. The woman, the apparent recipient of these imagined gestures of undying devotion, swoons at his feet.

But, I have to confess, they leave me unmoved.

I would trade changing the light bulbs for the rose petals, taking out the garbage for the stars, and since I have an irrational fear of birds, just about anything for that!

Words of affection are certainly nice. And necessary. The desire to give to someone you love is a good one, as is the wish to express your caring lavishly.

But not only are those gestures impractical, they're frequently not as meaningful as the small daily mundane activities. Because they are ultimately useless (Sorry, I'm a practical kinda gal), they don't relieve our daily burden, they don't ease our stress, they don't remove any pressure from our regular responsibilities. They aren't really giving us what we need, what is truly helpful.

Do they really express love or just the poet's fanciful notion of it? If my husband ever thought to throw rose petals in my path (he knows me better than that!), I'd probably laugh. But when he went away recently and set up the coffeemaker for me so I wouldn't have to do anything in the morning when I stumbled bleary-eyed out of bed, I was touched. And appreciative.

Maybe one positive result of this recession will be a back-to-basics in the romantic arena as well.

If Duguet could have gone in the same spirit (maybe he did), I think he would have said that small private acts are also preferable to large public ones (although he may have worded it better). Affection expressed excessively in public is, at best, a show and, at worst, a humiliation. (Or is it the other way around?) Not only is its sincerity suspect -- it's not clear whether it's for you or the crowd. (Can we officially end proposals on the scoreboard at baseball games?!) It takes something private and special and turns it into a public experience. That's not love, that's Hollywood.

We have gotten used to expecting the lavish: elaborate proposals, fancy weddings, exotic honeymoons, large diamonds, extravagant gifts and vacations. But maybe one positive result of this recession will be a back-to-basics in the romantic arena as well. Maybe it will mean a return to the (dull?) solid values that keep marriage together, the interdependency for the little things, the expression of affection in simple, reserved and private ways. And the making a little extra effort to give just a little more -- to make her tea after dinner, to take his shoes to be resoled and polished, to bring her flowers for Shabbos, to order the books he wants from the library.

No one will ever write sonnets to these activities, yet this is the stuff of real life. And real success.

I haven't seen any studies but I'm sure that these relationships – the ones built on the smallest good deeds instead of the grandest good intentions – are the longer lasting ones.

Being An In-Law
Were Adam and Eve Jewish?
How I Learned to Love the Multiverse
10 Big Jewish Inventions
Comments