A Tale of Two Trees - Serpents of Desire, Part 2 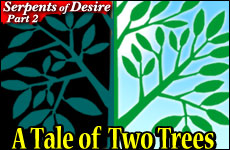 Until now, we've concentrated on the mysterious "Tree of Knowledge of Good and Evil." But there was more than one special tree in the garden. For God also created a second, mysterious tree in Paradise -- the Tree of Life:

God made grow out of the ground every tree pleasant to look at and good to eat, [including] the Tree of Life in the middle of the garden, and the Tree of Knowledge of Good and Evil (Genesis, 2:9).

Throughout the Eden story, the Tree of Life remains tantalizingly in the background. It is created, but then virtually disappears from the discussion. What role does this second tree play in the story, and how are we to understand its meaning?

Although the Tree of Life may be out of sight, it is not out of mind. Towards the end of the story, after Adam and Eve have eaten the forbidden fruit, we once again hear of the mysterious Tree of Life:

God said, 'Man has now become like one of us in knowing good and evil. Now he must be prevented from putting forth his hand and also taking from the Tree of Life, He [can] eat it and live forever!' (3:22).

Just to make matters a little worse, let's remember exactly where the Tree of Life was located:

...the Tree of Life in the middle of the garden, and the Tree of Knowledge of Good and Evil (Genesis, 2:9).

Let's add it all up. The Tree of Life was in the center of the garden, and Adam and Eve were never told to avoid its fruit. Indeed, it is unclear whether they even knew that it was a special tree. Well, what is likely to eventually happen?

Clearly, it's only a matter of time before someone eats from its fruit.

Why is the Tree of Life fine to eat from before partaking from the Tree of Knowledge, but not after?

Why? What accounts for this curious relationship between the trees? Why is the Tree of Life fine to eat from before partaking from the Tree of Knowledge, but not after?

That's one point we'll want to get back to. But we're not done yet exploring the mysterious relationship between these two trees. Indeed, we are just beginning.

THE CHERUBS WITH THE FLAMING SWORD

Consider this for a moment:

The angels holding a flaming sword who God sets up to "guard the way [back to] the Tree of Life" (Genesis, 3:24) are of a very particular kind. They are cherubs. (For those of you who enjoy Renaissance art, that's the kind of angel that Rubens always used to like to paint -- although I don't know why he thought he knew what they looked like). Now, as it happens, a Cherub is a relatively rare kind of angel. Throughout the entire Five Books of Moses, we find them in only two places. Besides their appearance here, guarding the Tree of Life, they are mentioned only once more. Paced atop the Holy Ark in the Tabernacle, are two cherubs, fashioned out of gold:

Make two golden cherubs, hammering them out from the two ends [of the ark]... The cherubs shall spread their wings upward so that their wings shield the [ark's] cover... (Exodus 25:18; 25:20).

Now go one step further. What treasure was this second pair of cherubs guarding -- these only other cherubs in the entire Five Books of Moses?

For those of you who make it to synagogue on the Sabbath, you should be familiar with the words I am thinking of right now. You say them every week, as the Torah is raised aloft from the bimah so that all can see:

Fascinating. The only other time we meet cherubs in the entire Torah, they are once again guarding a "Tree of Life". Only this time, they are not keeping us away from the Tree of Life; they are ushering us towards it, shielding both us and the Torah beneath their protective wings.

What are we to make of this? Why are the cherubs who keep us away from the original Tree of Life trying to give us access to a second such tree? What does it even mean to call the Torah "a Tree of Life"? Is there an essential similarity between the two?

The skeptic inside you might dismiss this all as coincidence. Cherubs here, cherubs there, cherubs everywhere. But the lines that seem to connect the Torah and the Tree of Life go farther and deeper...

Try this question on for size: What were Adam and Eve like before eating from either tree, the Tree of Knowledge of the Tree of Life? Were they mortal, or immortal?

Let's see what each tree has to say about this. We'll start with the Tree of Knowledge.

We know that Adam was warned not to eat from the Tree of Knowledge, because "on the day that you eat from it, you will surely die" (Genesis, 2:17). As the classic commentator Nachmanides suggests, the verse can't mean that the fruit immediately kills you, for in fact, Adam and Eve went on to live for a long time after eating the forbidden fruit. Rather, the verse seems to mean "on the day that you eat from the fruit you will become mortal". I.e. you will immediately become transformed into beings that eventually die. This, apparently, is the meaning of God's warning.

So the Tree of Knowledge seems to answer the question we posed earlier. It proves that Adam and Eve were originally immortal. Right?

Wrong. Because now it's time to look at what the Tree of Life has to say about the question.

The Torah tells us that God banished Adam and Eve from Eden "lest they eat from the Tree of Life and live forever." Well, the verse seems pretty clear about it: The fruit of the Tree of Life confers immortality -- once you eat it, you will never die. So if the Tree of Life makes you immortal -- well, that seems to mean you were mortal beforehand.

But wait a minute. I thought we said just a minute ago that Adam and Eve started out being immortal.

But only at face value. There's a way out of the contradiction. A surprising alternative exists about the original nature of Adam and Eve which would resolve the problem. Stop reading for a second, think about it, and see if you can find the solution.

THE GARDEN OF EDEN AND THE HEISENBERG UNCERTAINTY PRINCIPLE

If such an "undetermined state" seems strange to you, don't fret. Just repair to the library and pick up any book on quantum physics. According to this branch of science, it is a pretty standard feature of reality for things to be undetermined. At any one moment, a given electron may be here or it may be there, Heisenberg famously proclaimed, but right now it is neither here nor there. Its position becomes "determined" only once an observer steps in and looks at it. Well, if electrons can remain undetermined -- maybe people can as well.

Now, if we're right about all of this -- that Eden was a place where man was precariously placed between life and death, depending on his choice -- well then, it would seem that Eden eerily foreshadows another great moment of Jewish history. It reminds us of another, later time when we were neither here nor there, and the Almighty offered us a similar choice between "life" and "death":

When Moses uttered these words, the people stood in the wasteland of a desert, not yet possessing either the "life" or the "death" that lay before them. Once again, we were asked to choose. In this case, "life" was identified as embracing the Torah and its principles, while "death" meant rejecting them.

We have a long way to go, but we are starting to get somewhere in developing our picture of the two mysterious trees in Eden. In upcoming weeks, we will try and lay out some other puzzle pieces in the grand saga of Adam and Eve in Eden. And then, once the jigsaw pieces are all out on the floor, we'll begin, bit by bit, to try and discern the picture they seem to reveal.

Beauty and the Beast: Serpents of Desire, Part 69 min read

What's In It for the Snake? Serpents of Desire, Part 511 min read

The Dark Side of Paradise - Serpents of Desire, Part 39 min read

Adam, Eve and the Elephant in the Room - Serpents of Desire, Part 19 min read

Serpents of Desire: Good and Evil in the Garden of Eden. An Introduction5 min read