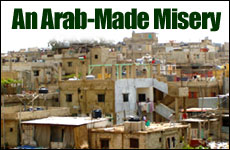 It is time for the Arab world to truly help the Palestinians, not use them.

International donors pledged almost $4.5 billion in aid for Gaza earlier this month. It has been very painful for me to witness over the past few years the deteriorating humanitarian situation in that narrow strip where I lived as a child in the 1950s.

The media tend to attribute Gaza's decline solely to Israeli military and economic actions against Hamas. But such a myopic analysis ignores the problem's root cause: 60 years of Arab policy aimed at cementing the Palestinian people's status as stateless refugees in order to use their suffering as a weapon against Israel.

As a child in Gaza in the 1950s, I experienced the early results of this policy. Egypt, which then controlled the territory, conducted guerrilla-style operations against Israel from Gaza. My father commanded these operations, carried out by Palestinian fedayeen, Arabic for "self-sacrifice." Back then, Gaza was already the front line of the Arab jihad against Israel. My father was assassinated by Israeli forces in 1956.

It was in those years that the Arab League started its Palestinian refugee policy. Arab countries implemented special laws designed to make it impossible to integrate the Palestinian refugees from the 1948 Arab war against Israel. Even descendants of Palestinian refugees who are born in another Arab country and live there their entire lives can never gain that country's passport. Even if they marry a citizen of an Arab country, they cannot become citizens of their spouse's country. They must remain "Palestinian" even though they may have never set foot in the West Bank or Gaza.

This policy of forcing a Palestinian identity on these people for eternity and condemning them to a miserable life in a refugee camp was designed to perpetuate and exacerbate the Palestinian refugee crisis.

So was the Arab policy of overpopulating Gaza. The United Nations Relief and Works Agency for Palestine Refugees in the Near East, whose main political support comes from Arab countries, encourages high birth rates by rewarding families with many children. Yasser Arafat said the Palestinian woman's womb was his best weapon.

For 60 years, Palestinians have been used and abused by Arab regimes and Palestinian terrorists in their fight against Israel.

Arab countries always push for classifying as many Palestinians as possible as "refugees." As a result, about one-third of the Palestinians in Gaza still live in refugee camps. For 60 years, Palestinians have been used and abused by Arab regimes and Palestinian terrorists in their fight against Israel.

Now it is Hamas, an Islamist terror organization supported by Iran, which is using and abusing Palestinians for this purpose. While Hamas leaders hid in the well-stocked bunkers and tunnels they prepared before they provoked Israel into attacking them, Palestinian civilians were exposed and caught in the deadly crossfire between Hamas and Israeli soldiers.

As a result of 60 years of this Arab policy, Gaza has become a prison camp for 1.5 million Palestinians. Both Israel and Egypt are fearful of terrorist infiltration from Gaza -- all the more so since Hamas took over -- and have always maintained tight controls over their borders with Gaza. The Palestinians continue to endure hardships because Gaza continues to serve as the launching pad for terror attacks against Israeli citizens. Those attacks come in the form of Hamas missiles that indiscriminately target Israeli kindergartens, homes and businesses.

And Hamas continued these attacks more than two years after Israel withdrew from Gaza in the hope that this step would begin the process of building a Palestinian state, eventually leading to a peaceful, two-state solution to the Israeli-Palestinian conflict. There was no "cycle of violence" then, no justification for anything other than peace and prosperity. But instead, Hamas chose Islamic jihad. Gazans' and Israelis' hopes have been met with misery for Palestinians and missiles for Israelis.

Hamas, an Iran proxy, has become a danger not only to Israel, but also to Palestinians as well as to neighboring Arab states, who fear the spread of radical Islam could destabilize their countries.

Golda Meir, on the Palestinians

Israel's War to Halt Palestinian Rocket Attacks
The Promise Of The Land
Which Chat Are You On?: Parshas Behar/Lag Ba’Omer
Do You Like Slow-Cooked Food? Thank the Jews
Comments
MOST POPULAR IN Middle East
Our privacy policy