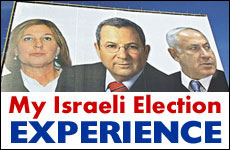 While for the rest of the country it was a day of fragmentation, in our voting room there was a moment of unity.

I had the honor of serving as a chairman of one of the more than 9,000 ballot boxes used during the elections for the 18th Knesset. When I arrived at the voting location at 6:30a.m. I had no idea that I would leave at 12:15a.m., almost 18 hours later, with such a mind altering experience.

The first thing to strike me was the different worlds merging together on my staff. My deputy was a young, secular woman representing the Labor party. The second member of my committee was a young, religious woman representing National Union. There were two "voting observers" on the staff, both hareidi men – one from United Torah Judaism and one from Shas. During the course of the day, an additional observer joined the staff from Kadima. The camaraderie and unity which developed over the course of the day among the group was quite remarkable.

In what other setting do people from all walks of Israeli life sit and discuss the coming of the Messiah?

As a group we laughed, debated some points, discussed our backgrounds and cultures and really bonded. In what other setting would a hareidi man be found sitting and talking amicably with a secular woman? Where else would a member of Shas be found challenging a young, Kadima activist to solve a difficult riddle? In what other setting do people from all walks of Israeli life sit and discuss the coming of the Messiah, the Iranian nuclear threat, and anti-Zionist extremists? While for the rest of the country it was a day of fragmentation as people voted their separate ways, in our voting room there was a moment of unity.

The second incredible impression was witnessing certain distinct voting experiences. A new immigrant from America in her nineties took close to 20 minutes as she tried to decipher the various Hebrew acronyms on the voting slips, refusing legal help from my staff since she "needed to do this by myself." She had tears in her eyes as she put her envelope through the slot in the ballot box.

There were French immigrants who, upon putting their envelopes in the ballot box, proudly proclaimed "avoteh!" - the French declaration that "I have done my civic duty." There was an older Israeli woman who, upon putting her ballot in the box mumbled, "The Messiah should come today." There was a Russian couple who were standing outside the room for quite some time trying to make up their minds regarding their vote – clearly basking in the fact that they are blessed with the right to make this decision and influence the future of their country.

There was a young man who moved to Jerusalem recently but was still registered in Bet Shemesh who, upon realizing that he left his identification documents at home panicked and was willing to spend hours on the road driving wherever he had to go to find some way to vote. There was the recent Anglo olah [immigrant] pleading with us to find a way for her to vote despite her not holding the legal documents to allow her to do so. Overall, there was an incredible sense of anticipation, tension, and excitement, as people were not simply voting but clearly sensing that they were helping to set the direction of their nation.

Our country has a bright future with passionate and caring citizens who have more in common than we are often led to believe.

The final experience came at the end of the day when it was time to count the votes. Some of the staff members felt so comfortable with the rest of the group that they decided to reveal for whom they voted. The young male Kadima representative? He voted for Shas. The young female Labor representative? Shas. This taught me in the most glaring and tangible way that externals cannot define the essence of a person and you simply never know what a person truly feels on the inside.

It also revealed to me that there is a searching and yearning for something spiritual and meaningful among the younger generation in Israel which manifested itself in these two people, one Sephardic and one Ashkenazic, identifying with Rav Ovadiah Yosef and a religious party.

We do not yet know the results of the elections and in which direction our country will turn. But for me, election day yielded tremendous fruits as I came to the conclusion that our country has a bright future with passionate and caring citizens who have more in common than we are often led to believe. For me, and I hope for you, this serves as an election day victory.

The Fastest Woman in Israel is an Orthodox Mother of Five

Mom, I'm Moving To Israel
Don’t Believe in Other Gods Versus God is One
Seeing Without Eyes
Why Shouldn’t We Eat Whatever We Want?
Comments
MOST POPULAR IN Israel
Our privacy policy
Aish.com Is Looking for Great Writers