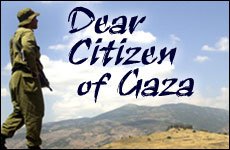 I am the soldier who slept in your home.

While the world watches the ruins in Gaza, you return to your home which remains standing. However, I am sure that it is clear to you that someone was in your home while you were away.

I am that someone.

I spent long hours imagining how you would react when you walked into your home. How you would feel when you understood that IDF soldiers had slept on your mattresses and used your blankets to keep warm.

I knew that it would make you angry and sad and that you would feel this violation of the most intimate areas of your life by those defined as your enemies, with stinging humiliation. I am convinced that you hate me with unbridled hatred, and you do not have even the tiniest desire to hear what I have to say. At the same time, it is important for me to say the following in the hope that there is even the minutest chance that you will hear me.

I need you to understand me, us, and hope that you will channel your anger and criticism to the right places.

I wanted you to know that despite the immense disorder you found in your house that was created during a search for explosives and tunnels (which were indeed found in other homes), we did our best to treat your possessions with respect. When I moved the computer table, I disconnected the cables and lay them down neatly on the floor, as I would do with my own computer. I even covered the computer from dust with a piece of cloth. I tried to put back the clothes that fell when we moved the closet although not the same as you would have done, but at least in such a way that nothing would get lost.

I know that the devastation, the bullet holes in your walls and the destruction of those homes near you place my descriptions in a ridiculous light. Still, I need you to understand me, us, and hope that you will channel your anger and criticism to the right places.

I decided to write you this letter specifically because I stayed in your home.

I can surmise that you are intelligent and educated and there are those in your household that are university students. Your children learn English, and you are connected to the Internet. You are not ignorant; you know what is going on around you.

Therefore, I am sure you know that Qassam rockets were launched from your neighborhood into Israeli towns and cities.

How could you see these weekly launches and not think that one day we would say "enough"?! Did you ever consider that it is perhaps wrong to launch rockets at innocent civilians trying to lead a normal life, much like you? How long did you think we would sit back without reacting?

I can hear you saying "it's not me, it's Hamas". My intuition tells me you are not their most avid supporter. If you look closely at the sad reality in which your people live, and you do not try to deceive yourself or make excuses about "occupation", you must certainly reach the conclusion that the Hamas is your real enemy.

The reality is so simple, even a seven year old can understand: Israel withdrew from the Gaza strip, removing military bases and its citizens from Gush Katif. Nonetheless, we continued to provide you with electricity, water, and goods (and this I know very well as during my reserve duty I guarded the border crossings more than once, and witnessed hundreds of trucks full of goods entering a blockade-free Gaza every day).

Despite all this, for reasons that cannot be understood and with a lack of any rational logic, Hamas launched missiles on Israeli towns. For three years we clenched our teeth and restrained ourselves. In the end, we could not take it anymore and entered the Gaza strip, into your neighborhood, in order to remove those who want to kill us. A reality that is painful but very easy to explain.

You must lead a civil uprising against Hamas.

As soon as you agree with me that Hamas is your enemy and because of them, your people are miserable, you will also understand that the change must come from within. I am acutely aware of the fact that what I say is easier to write than to do, but I do not see any other way. You, who are connected to the world and concerned about your children's education, must lead, together with your friends, a civil uprising against Hamas.

I swear to you, that if the citizens of Gaza were busy paving roads, building schools, opening factories and cultural institutions instead of dwelling in self pity, arms smuggling and nurturing a hatred to your Israeli neighbors, your homes would not be in ruins right now. If your leaders were not corrupt and motivated by hatred, your home would not have been harmed. If someone would have stood up and shouted that there is no point in launching missiles on innocent civilians, I would not have to stand in your kitchen as a soldier.

You don't have money, you tell me? You have more than you can imagine.

Even before Hamas took control of Gaza, during the time of Yasser Arafat, millions if not billions of dollars donated by the world community to the Palestinians was used for purchasing arms or taken directly to your leaders bank accounts. Gulf States, the emirates - your brothers, your flesh and blood, are some of the richest nations in the world. If there was even a small feeling of solidarity between Arab nations, if these nations had but the smallest interest in reconstructing the Palestinian people - your situation would be very different.

You must be familiar with Singapore. The land mass there is not much larger than the Gaza strip and it is considered to be the second most populated country in the world. Yet, Singapore is a successful, prospering, and well managed country. Why not the same for you?

My friend, I would like to call you by name, but I will not do so publicly. I want you to know that I am 100% at peace with what my country did, what my army did, and what I did. However, I feel your pain. I am sorry for the destruction you are finding in your neighborhood at this moment. On a personal level, I did what I could to minimize the damage to your home as much as possible.

Instead of sinking into self-pity, build a flourishing and prospering country.

In my opinion, we have a lot more in common than you might imagine. I am a civilian, not a soldier, and in my private life I have nothing to do with the military. However, I have an obligation to leave my home, put on a uniform, and protect my family every time we are attacked. I have no desire to be in your home wearing a uniform again and I would be more than happy to sit with you as a guest on your beautiful balcony, drinking sweet tea seasoned with the sage growing in your garden.

The only person who could make that dream a reality is you. Take responsibility for yourself, your family, your people, and start to take control of your destiny. How? I do not know. Maybe there is something to be learned from the Jewish people who rose up from the most destructive human tragedy of the 20th century, and instead of sinking into self-pity, built a flourishing and prospering country. It is possible, and it is in your hands.

I am ready to be there to provide a shoulder of support and help to you.

But only you can move the wheels of history.

The above was a letter that was originally published in the Hebrew-language daily newspaper Ma'ariv, and translated into English by the Independent Media Review and Analysis (IMRA).
Like What You Read?  Give Jews around the world the chance to experience engaging Jewish wisdom with more articles and videos on Aish. It would make your mother so proud and as a nonprofit organization it's your support that keeps us going. Thanks a ton!

The Flower of David
Why Are The Prayers Of Yom Kipur So Repetetive?
Ha'azinu 5783: A Time for Unity!
Twisted Thinking
Comments