The Jewish Ethicist: Scientist or Salesman? 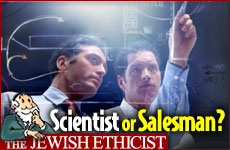 Is it unethical for an scientist to have commercial interests involved in his work?

Q. I'm attending a scientific conference to report on my research showing that a certain common compound has a new use in industry. One particular manufacturer of the compound offered to pay me to display samples of his product at the conference. Is this proper?

A. There are two possible ethical pitfalls in the practice you describe: conflict of interest, and misleading practices.

The potential for conflict of interest arises whenever scientists have a commercial interest. There is much evidence that some scientists have tried to slant their research in order to show results favorable to the product of a company that sponsored their research, or that may do so in the future. Even if you are able to remain unbiased, representing a manufacturer may give the appearance of bias.

In Jewish law, the general approach to dealing with conflicts of interest is disclosure. Conflicts of interest can never be totally eliminated; if research is financed through government agencies or other sources, these bodies have their own agenda which can create other biases. (That's why it is important that research be funded by a variety of different sources.)

The Torah commands: "Don't place an obstacle before the blind" (Leviticus 19:14). In Jewish tradition, this means creating any obstacle to a person's pursuit of his/her own self-interest. Rashi's commentary explains that "blind" means "someone who is blind to the affair" at hand. He gives the following example: "Don't advise your friend, 'Sell your field and buy a donkey', when your hidden intention is to buy it from him."

The problem is not the conflict of interest per se; a person is allowed to give a recommendation or a testimonial in return for payment and this is a common selling practice. The problem is the hidden conflict; the person is representing himself as an objective advisor -- in your case, a scientific researcher -- when in fact he has a hidden intention to encourage a sale that enriches him.

The way to deal with this issue is transparency. When you present your paper, you should add a disclosure of industry funds received. These disclosures have become commonplace and almost ubiquitous in scientific publications.

The second issue is giving a misleading impression. Since you are an expert in the industrial benefits of this particular plant, people are likely to interpret your display as a testimonial, which is not what you intend.

Even though the student does not actually testify on behalf of his teacher, his presence there gives the impression that he will do so and may pressure the supposed borrower to admit to the loan. Similarly, in some contexts, your very presence may suggest to people that you are giving a testimonial, even if you state that you are merely presenting a sample on behalf of the manufacturer.

You should make sure that the way you display the sample doesn't give the impression that you are recommending it based on your research; if you can't, then you must refuse the support.

The final issue, of giving the appearance of bias, is not only an ethical one but also a practical one. Consider if possible damage to your reputation may outweigh any benefit you obtain from the funding.

Scientific researchers are not automatically disqualified from involvement with or even promotion of commercial products. Their expertise may be a substantive benefit to industry. However, it is necessary to thoroughly partition scientific and commercial activities. You need to make sure that your presentation is in no way affected by commercial backing, and simultaneously to make a customary disclosure. You also need to scrupulously avoid giving the impression that your scientific research somehow favors the product of any particular manufacturer if this is not the case.

Beyond the ethical issues, it is worthwhile for you to consider any possible impact on your scientific reputation.

The Jewish Ethicist: Age and Independence
Blessing on Chewing Gum
Was Rahab a Prostitute?
Extras In Our Own Epic
Comments
MOST POPULAR IN Current Issues
Our privacy policy