Jews and Food: The Passover Connection 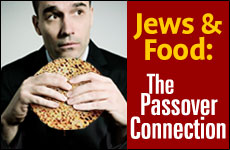 Strengthening the life force of the nascent, fragile nation.

Most of the Passover mitzvot revolve around food. In fact, besides the telling of the story of leaving Egypt, all other commandments are eating-oriented: matzah, maror, the four cups of wine, vegetable dipped in salt water, leaning while eating, etc.

As much as we Jews tend to focus on food on the holidays, there are always other characteristics of the holiday that are more important: shofar on Rosh Hashana, building a sukkah and the four species on Sukkot, lighting the menorah on Chanukah, hearing the megillah and giving charity on Purim, etc. And yet, on Passover, the first holiday in the Jewish calendar, food takes center stage on Seder night.

What is the nature of food and its connection to Passover?

Before eating you may feel weak, indicating a diminishing of life force and energy. Then, as you eat, your strength is restored and the life force is immediately infused into you.

Eating most powerfully gives us the opportunity to feel a direct connection with God.

God is the only Giver of life; He holds the key to life and we essentially have no power over His constant giving. Therefore we can deduce that eating most powerfully gives us the opportunity to feel a direct connection with God.

Although we have some control attaining other necessities of life, like oxygen and water, the actual force of life itself is completely in the hands of the Almighty. Each moment we receive that gift of sustenance, it is from God Himself.

"If one attaches himself to the Almighty with a complete attachment, one might possibly even access from Him the power of reviving someone back to life, as this is the most specifically Godly power, more than anything else." (End of Path of the Just, Chapter 26, describing the highest level achievable in mankind, in the steps toward Godliness.)

The feeling most associated with soaking up life directly from God can be attained through eating.

EGYPT – THE EPITOME OF INDEPENDENCE FROM GOD

Passover is the holiday which represents the birth of the Jewish nation. Prior to the exodus, the Jewish people were considered in utero, not yet born. When a fetus is in its mother's womb, it is completely part of its mother, dependent on everything she does, eating what she eats, drinking what she drinks. It doesn't yet have a life of its own.

Egypt was known at that time as the only country not dependent on rain for its livelihood. The Nile would overflow and water all the fields. Therefore Egyptians felt completely independent of God, with no need to look heavenward and hope for rain. Pharaoh expressed this feeling when he said, "Mine is the Nile and I created me" (Ezekiel 29:3).

Therefore, while the Jewish people were in Egypt as a fetus, eating what their "mother" ate as an intrinsic part of that nation, that was their essence as well, completely disconnected from the spiritual and from God. They didn't yet have their own inherent existence and identity.

When a baby is born, a hubbub of activity surrounds him. Until you hear that first cry, there is a tremendous tension, as the baby precariously hovers in a zone situated between life and death. At this very point of coming into existence, life is most fragile. Certain critical things have to change quickly to allow for the child to become an independent entity, separate from its mother. Its umbilical cord is no longer connected to its source of sustenance and instead its mouth and throat, which were closed all these months, have to open and start functioning as a medium through which the baby receives its nourishment. Its breathing system undergoes a radical change as well. This transformation and delicate beginning bring with it vulnerability and danger. Only after those first few moments do things calm down a bit and the status quo of life takes over.

On the Seder night, the most important activity is to enable the existence of the new baby-to-be, the Jewish nation.

When the Jewish people left Egypt, that moment they came into being as a nation. That precarious night was fraught with danger. They had been submerged in such impurity that they really didn't deserve to come into being at all.

"They were hanging in the balance during that time, whether to be saved or destroyed with the Egyptians" (Midrash, Yalkut Shimoni 233).

On the Seder night, the most important activity is to enable the existence of the new baby-to-be, the Jewish nation. No other activities can happen when we are still in limbo, fragile, endangered. All that can occur is the strengthening of the life force, creating the essence of this child, namely: eating!

And the kind of food we eat is crucial as well. Just like you can't let a newborn baby ingest anything in the first few days that might tax her newly activated digestive system, nor expose her to any bacteria which her immune system can't fight off, so too, we on Passover we have a strict diet to which we must adhere: "chametz asur b'mashehu" -- not even a drop of leaven is permitted on this holiday when our spiritual immunity is so low. We must build our resistance up in a "sterile" environment, with specially equipped nourishment, "mother's milk" – matzah, which the mystical sources call "the bread of belief." Later on as we develop and reach the giving of the Torah on Shavuot, we can allow a certain amount of "bacteria" -- leavened foods -- into our diet. In fact, these foods can even be part of the commandments of the holiday.

But on Passover, as we create the foundation for our identity as a Jewish people, extreme care must be taken to enhance our spiritual nature, to eat only God-prescribed food which is tailor-made for our needs at this crucial juncture.

On the Seder night, as we eat the matzah with its exacting requirements, keep in mind we are emerging into a new world, becoming a new entity, separate from the other nations, creating our own Jewish identity. We are ingesting God's "milk" of spiritual nourishment, the "bread of belief," and building within ourselves a direct connection with God which creates a rock-solid foundation of Jewish belief, fueling us for the rest of the year.

This article was adapted mostly from a number of Hebrew essays on Passover by Rabbi Shimshon Pincus, zt"l.

A Paradigm for Jewish Leadership

What Is Freedom?
Lessons from the Book of Jonah
Where Are We? The Body, Brain, Soul Problem
Dr. Sheila Nazarian’s Escape from Iran
Comments
MOST POPULAR IN Passover
Our privacy policy
Aish.com Is Looking for Great Writers