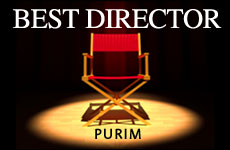 Scorsese move over. Purim reminds us who is really sitting in the director's chair.

I thought that it was the worst thing that had happened to me in all of my 18 years on the planet. As a Russian and Political Science major, my dream was to spend my junior year of college participating in a groundbreaking year-long study program at a Russian university. Only two students would be chosen to represent each university.

When the acceptance letters were sent out, two of my classmates were chosen instead of me. I was furious. I was humiliated. And I was prepared to fight the decision tooth and nail.

I appealed to the head of my college's Russian department. I appealed to the Dean of Faculty. They both agreed that I had not been treated fairly in the acceptance process, and the professor who had rejected me from the program received an official letter of rebuke for her behavior from the Dean's office.

But it didn't help. My classmates would spend the following year on the program instead of me. I was absolutely devastated.

In the end, instead of traveling to Russia, I decided to make my first trip to Israel in order to volunteer with Russian-speaking immigrants. When I arrived in Jerusalem in February 1992, I fell in love with Israel at first sight, and had my first exposure to traditional Judaism when I spent several months studying at a yeshiva for women. These were among the most transformative and important months of my life.

In retrospect, 15 years after the fact, I realize that my rejection from that study program was, without comparison, the most fortunate turn of events of my entire life.

QUIET ON THE SET

Looking back, it was as though God had personally reached down into the world, picked me up and turned me around 180 degrees, despite my kicking and screaming.

Life has a way of disappointing us. When you have just been fired from a great job, broken your leg, lost a profitable business deal, or been dumped by the person you thought was your knight in shining armor, your first tendency is probably to look up in frustration and yell, "God, why have You abandoned me?"

Purim comes once a year to remind us that God is the One sitting in the Director's chair even on those frequent occasions when life lets us down.

The holiday of Purim comes once a year to remind us that God is the One sitting in the Director's chair calling out "Quiet on the set -- action!" even on those frequent occasions when life lets us down.

Out of the 24 books of the Bible, the Book of Esther is in that God's name is not mentioned even once. This means that the distressing events of the Purim story, like the distressing moments of our lives, appear to take place by coincidence, with God totally out of the picture. Esther is taken from the devout home of Mordechai where she was raised, and forced to marry the loathsome, idol-worshipping King Achashverosh against her will. The evil Haman rises to power, and makes a declaration of genocide against all of the Jewish men, women, and children living throughout the Persian Empire.

But by the end of the Purim story, we understand that God is never out of the picture. Haman has been executed, Mordechai has risen to power in his place, and the Jews celebrate their miraculous redemption from certain death with joy and feasting.

We can easily look back at the earlier chapters and see that what had initially appeared to be a multitude of random and arbitrary twists of fate were actually carefully orchestrated acts of God to save the Jewish people and bring them closer to their Creator.

There may come a time when you wish that you could change the script you've been given. But it's a whole lot easier to embrace your role when you appreciate that you are putting yourself in the hands of the finest Auteur.

It's Not The Jewish Halloween
What Does Kosher Mean Literally?
Live Abortion Panel
Morality and Abortion: Three Views
Comments
MOST POPULAR IN Themes
Our privacy policy