Not At Any Price 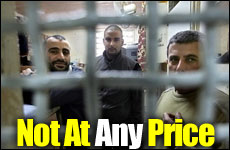 Why risk lives of soldiers to capture terrorists who will be released later on?

Lately I've been preparing for the sixth yahrtzeit of my daughter Tal Kerman, who was killed in a terror attack in Sderot Moria, Haifa. I am against the notion that every bereaved parent has "the right" or the privilege to have his words given priority over others'. But unlike the average citizen who did not pay the price of the omissions that caused my daughter's death, I do pay this price every day and hope other parents will not have to go through the same experience.

The release of terrorists and our surrender to terrorism will only bring more death and bereavement to our society.

Yet Tal's death does not give my two living children immunity against being terror victims in the next terror attacks. Furthermore, the massive release of terrorists and our surrender to terrorism will only bring more death and bereavement to our society.

When debating the possibility of releasing 1,400 terrorists from jail -- some of whom killed and others caught before succeeding in doing so, it is easy to picture in our mind the image of the abducted soldier. But we do not see the future terror victims who may be killed as a result of this exchange deal.

Before the president or the prime minister make their decision, I would like to clarify some important issues that may have been disregarded due to our strong will to release our soldier.

We must not ignore the significant efforts and the security officials who risked their lives: Members of the intelligence, the Shin Bet, IDF etc., who worked very hard to catch these murderers and potential murderers. These agents have risked their lives to capture wanted terrorists; some were killed during their mission.

After their arrests, the long and trying legal processes began. All apprehended prisoners were granted fair trials, which terror victims were never granted and future terror victims never will. Many precious hours of the legal system were spent in order to bring them to justice. It was not enough to bring them to justice in the lower courts, since they were given the right to appeal before being sentenced.

What's the point in risking the lives of security personnel, spending days and hours on trials, and then releasing them right after a deal is signed?

The security establishment has warned time and again of prisoners' release and claimed that 60% of the released prisoners will resume their terror activities, being more skilled and dangerous after spending time in jail. How will the prime minister be able to command the security forces to catch these murderers in the future? Will his conscious allow him to send these soldiers to enemy territory in order to prevent the next terror attack that will be planned by them?

The release of prisoners who did not serve their full sentence in jail raises their status within Palestinian society and motivates a new terror generation that disregards the Israeli security and legal establishment.

The victory in the Cast Lead operation was not completed. There are other ways to release our abducted soldier that are more compatible with the rules of the game in our region. Our hesitance and lack of determination are seen by our enemies as weakness - and the weak always lose.

Yes, we can see and hear the abducted soldier; but the next victims are yet to have body and form, and we do not know their identity yet.

Soldiers fight in order to protect citizens' lives. Unfortunately, sometimes they get killed while doing so. The soldiers are those who should sacrifice their lives for civilians, not the other way around. By releasing terrorists in exchange for our soldiers we are reversing the right order. Seventy five percent of those who were killed by released terrorists were civilians, and it may well be the same in the future.

Ron Kerman is the father of Tal Kerman, may she rest in peace.