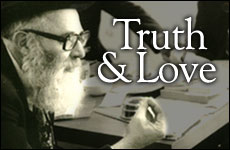 When I asked Rabbi Noach Weinberg, my Rosh Yeshiva, in 1992 about setting up a branch of Aish in the UK, he told me not to do it. He didn't think Aish would be successful there. But I went anyway because of two key principles I had learned from him. Firstly, that being his student meant listening seriously and respectfully, but ultimately making my own decision. And secondly, that with enough reliance on God and the right amount of effort, anything is possible.

When I left, I knew he was deeply satisfied that I was making my own decision, not just doing what he said. There was always a twinkle in his eye when you disagreed with him because above all else, his teaching was that of independence and personal responsibility. Nothing mattered to him more than our exercising our own free choice.

He wanted independent thinkers, people who had their own well-considered opinions -- even if they were different than his.

He could have created students who were willing, following zombies; he certainly had the charisma to do so. But he wanted independent thinkers, people who had their own well-considered and honestly reasoned opinions -- even if those opinions were different than his. He wanted leaders, not followers.

When I had some success in the UK, he was overjoyed. And when it was clear that Aish UK was going to make a meaningful contribution to Anglo Jewry, he openly said to me that he had made a mistake in telling me not to go. His humility was incredible. He wanted truth and nothing else mattered to him. If it wasn't truth, then he wanted to be wrong. And if he felt it was true, there was no one who jumped quicker, ran faster or stayed the course longer.

I remember a relative telling me years ago that anyone who is not an idealist in his twenties has no heart, and anyone who has not lost that idealism by his thirties has no brain. Has anyone ever met a man whose dreams burn inside of him in his late seventies as strongly and as vehemently as they did in his twenties? Rabbi Weinberg was such a man. If you had heard the aims and ambitions he talked about right up to his passing coming from the mouth of a young man, you would dismiss them as youthful exuberance and naive hopes. But when you heard the Rosh Yeshiva say it, you knew he meant it. For him idealism was realism. He dedicated his life to converting dreams into reality.

Impossible was not in the Rosh Yeshiva's dictionary.

'Changing the world' was not a cliche; it was as tangible as having breakfast. God ran the world, so anything was possible. Impossible was not in the Rosh Yeshiva's dictionary. The word was a lie, reserved only for idol worshippers and atheists. His greatest argument with atheism was not that it stopped people from believing in God, but that it stopped people from believing in themselves. 'Every human being has the ability to be as great as Moses', Rav Noach would often quote. He always lifted our sights, made sure we would not get stuck in the mud of our own self-deprecation. 'We are just a little bit less than the angels', he would say. With God on our side, the world is ours to conquer and bend to our will -- to His will.

But to limit the Rosh Yeshiva to one core character trait would be wrong. He was multi faceted.

It's hard to talk about someone to whom you owe all of your wisdom, all of your spiritual connection, all of your accomplishments, your life itself. And when I look at my seven children, each one a pure and gorgeous soul, I know that they are more his than mine. There are few in the Jewish People's history who have created lives from nothing in the way that the Rosh Yeshiva did -- and how many! Thousands, perhaps tens of thousands feel the way that I feel.

And finally, his love was immense. I felt that he always had time for me. He always took my call. Whenever I went to Israel, he would always have time for us to meet. He had thousands of students but he always made me feel like I was his only one. When I walked into his office, he would jump up and give me a big bear hug and say, 'Shaul, my tachshit (jewel)'.

He took days out of his busy schedule to help us during a time of hardship.

When my first wife Elana a"h became ill with cancer, he was still traveling regularly to America to fundraise. He suddenly started to stop over on his way back for a day in the UK. It was around the time that Aish UK had grown a great deal and I assumed he was stopping in to keep up with how the branch was doing. After almost every trip to America, he'd stop over and stay with us on his way back. When Elana passed away, he stopped coming as suddenly as he had started. I was shocked to realize that he had been stopping over for us, to give us his support and his advice, and most of all, his love. He took days out of his busy schedule to help us during a time of hardship. And he did it without even thinking twice.

He taught us that there are five levels of being an intellectual and lived them all. He defined every term, said only what he meant to say and meant everything he said. But most of all, he lived his ideas. For many, if you could compare their ideas about life to the way they live their lives, you would see large discrepancies. For the Rosh Yeshiva, there was no difference. If it made sense to him, he lived it. Ideas and actions were two inseparable sides of the very same coin. The sole purpose of wisdom was application.

My world seems so much colder without his love. But I know what he would say to me. Tachshit – what are you worried about? God's love is so much greater. And if there is a single message that he would want us to remember, it may well be this: God's love for us, his children, is immense, and with that realization pulsating in our hearts, the world is a gorgeous place where anything is possible.

Rabbi Shaul Rosenblatt is Director of the Rabbinical Training Academy, an innovative programme that mentors newly qualified rabbis through the first eighteen months of their first jobs. He is also the author of Why Bad Things DON'T Happen to Good People, a semi auto-biographical book about understanding and facing challenging times. He has recently published Mean What You Pray.

My Dear Father
The 21st President of the United States: Failure or Inspiration?
Hiding Their Jewishness
The Jewish Pope: Following the Questions Home
Comments
MOST POPULAR IN Rabbi Noah
Our privacy policy
Aish.com Is Looking for Great Writers