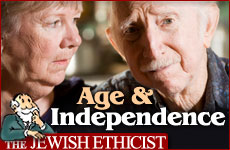 It's wrong to give so much that we become dependent on the public.

Q. May elderly parents give their money to their children so that their health or nursing care will be paid for by public assistance instead of their dwindling assets?

A. The first thing to check is the legal aspect. In many cases such gifts create an ineligibility period so that it would be impossible to legally employ this strategy. Likewise if the gift is not made in good faith (as an irrevocable gift with no strings attached) it would not create genuine eligibility.

Even when the practice is legal, I still have many reservations about this practice. Consider the following passage from the Talmud:

Rebbe Ila'a said in the name of Reish Lakish: [When the Sanhedrin was] in Usha, they legislated that one who transfers all his assets to his children, he and his wife may still draw support from them. . . They asked, is the law thus or not? Here is a proof: When Rebbe Chanina and Rebbe Yonatan were still alive, a certain man came and bent over and kissed Rebbe Yonatan's feet. Rebbe Chanina said to him, what was that about? He said, That man transferred all his assets to his children, and I pressured his children into supporting him. (1)

The Sanhedrin (supreme legislature) made a law that made inter vivos gifts conditional; if the parent ever became in need, he would be able to collect from the gift, rather than from public support. The law did not ultimately stand, but the principle was accepted by the rabbis, and they used their influence to compel children to support their aged parents from the money they received from them.

This implies that children who received assets from their parents should use them to help the parents rather than let them fall on the public. However, the case is not quite shut. In the case you describe, the parents are not averse to being on public support and in fact are maneuvering to make themselves eligible. To judge this case, let us bring the direct continuation of the above passage:

In this case they made an actual rule that even when it comes to the great mitzvah of giving charity, a person shouldn't give away so much of his property that he risks becoming dependent on public support. It would certainly follow that a person should not intentionally give away property with the specific intention of collecting from the dole.

In light of the above sources, I think the best course of action for someone who is worried that their wealth will be eaten up by the expense of long-term care, and who is willing to receive public support if necessary, is to give moderate gifts to their children each year. The gifts should not be so large as to make the need for public support definite or quite likely, but at the same time a person is not forbidden from giving gifts to his or her children just because at some time in the distant future it may result in not having enough for the expenses of old age.

The Jewish Ethicist: Disciplining Workers
The Blue Beyond
Great Place to Live
Is Eating Supposed To Be Spiritual?
Comments
MOST POPULAR IN Current Issues
Our privacy policy