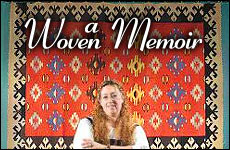 But the striking eight by nine foot hanging, given to her by her late paternal grandmother Ilona, has not always enjoyed such a place of honor.

At one time, the tapestry lay in tatters, buried in mud, and stained with the boot prints of SS soldiers -- much like the millions of Jewish families whose lives were muddied and ripped apart by the Holocaust.

Lily's family was among them, losing members of three generations to indiscriminate Nazi bullets, the gas chambers of Auschwitz, freezing temperatures, hunger, disease and other horrors of Hitler's campaign of extermination.

One who survived was Ilona, who emerged from the Second World War minus her husband, her younger boy, two of her three brothers and both her parents. Ilona -- a woman of 44 -- was not sent to "the showers" like her barely teenaged son Leslie, shot in an abandoned brickyard like her crippled mother or hauled off the cattle train like her blind old father.

Ilona had already survived tuberculosis at 15, the Spanish flu epidemic of 1919, and the loss of her husband Sandor Gutlohn, who was conscripted early in the war and taken to Ukraine where he died of a heart attack in 1942.

Young Leslie, a sweet boy who could not imagine the evil that prevailed, ran ahead.

In May 1944, when the Jews in her Hungarian home town, Miskolc, were rounded up and disposed of, Ilona's 18-year-old son Paul was loaded onto one of the Nazis' infamous trains. Young Leslie, newly 13 and probably a sweet boy who could not imagine the evil that prevailed, ran ahead through the confusion of the crowded platform to try to save his mother a seat on the train, but was prevented from rejoining her. 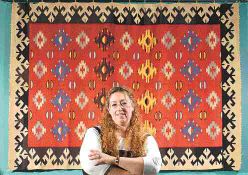 All she could hear was him calling out, 'Mother, Mother!'" Lily Sazz Fayter intones dispassionately, as she reads the details from a sheet prepared by her sister and based on an interview with their grandmother. Later, "Ilona would hear from a woman in the barracks that Leslie had been in the same train car as her and had gone straight to his death in the gas chamber."

Ilona endured four months at Auschwitz, the indescribable horrors of which -- the disease, the filth, the hunger, the indignities -- are well chronicled. She was working as a laborer -- laying bricks, building roads, cleaning soldiers' quarters -- when the camp was liberated in the spring of 1945.

As the war ended chaos reigned. Roads and bridges had been destroyed and the weak, sick, displaced, traumatized Jews who survived the camps were hundreds of miles from the homes and families they'd left.

Alone with no idea of the fate of her loved ones and no way to get home, the emaciated Ilona stayed on at Auschwitz for another month.

Alone with no idea of the fate of her loved ones and no way to get home, the emaciated Ilona stayed on at Auschwitz for another month. Eventually she managed to get to an uncle's house in Budapest where son Paul arrived four days later. It was a joyous reunion, but Paul and Ilona were the only ones left.

He too had been in a concentration camp, where his job had been to shovel bodies out of the gas chambers and into the crematoria. She was barely 90 pounds; he was frail and weak at 19, would lose his teeth prematurely and suffer ill health for the rest of his life, which ended in 1979 at the age of 53. 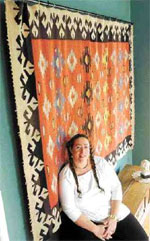 The two made their way back to Miskolc, and it is there, Lily believes, that Ilona found the tapestry. Although the details are unclear, it would appear that the tapestry had been part of the family's furnishings and had been damaged or destroyed by the SS soldiers who were using their home as an outpost.

"What I never got straight was whose family the tapestry was in to begin with," says Sazz Fayter. "I only know that when she came back, this thing was strewn on the ground in the mud. There'd been a lot of rain and the soldiers were using her books as stepping stones over the mud."

As Lily speaks, sitting in the shadow of the bold Torontali-patterned tapestry, one can almost picture her beloved "Nagymami," the broken, battered Ilona, coming upon the remnants of her once-happy home and stooping to pull the filthy piece of fabric out of the mire. A skilled needleworker, she mended the holes and tears as best she could, using whatever thread was available in that lean post-war period under communist rule. Close inspection reveals her fine stitchery and the mismatched colors of her repair job.

Ilona remarried in 1946 to Sandor Szasz, a neighbor who had lost his wife to the Holocaust. A year later, her son was introduced to 15-year-old Vera Spitzer, who'd been interned at the Theresienstadt camp in Czechoslovakia. She was one of the few young survivors of the Holocaust, in which nearly two million young children were killed outright or died during their imprisonment.

It was love at first sight and they married in the spring of 1948, the groom 21 and his bride just 16. Paul, who carried his father's surname, took on his stepfather's name of Szasz because Gutlohn sounded too Jewish. The newlyweds moved in with Ilona and Sandor, who were farming, and Ilona taught her daughter-in-law the wifely skills of cooking and managing a household. A baby, Susan, arrived in 1951.

But the troubles of this family, which had already endured more suffering and hardship than one lifetime should hold, were not over yet. Hungary's political climate was threatening, and the family was uprooted to a suburb of Budapest so Paul could work in an agricultural commune and Vera in a communal farm and greenhouse operation while Ilona cared for little Susan.

Paul and Vera bundled up their five-year-old daughter and fled in the night to the Austrian border.

A month after the outbreak of the Hungarian revolution in November 1956, Paul and Vera bundled up their five-year-old daughter and fled in the night to the Austrian border, armed with a sedative-filled hypodermic needle in case the little one needed silencing. They ended up in Vienna where they secured refugee visas, took the train to Le Havre and boarded a Cunard ship bound for Halifax.

Vera was seasick throughout the arduous North Atlantic crossing in January, and was greeted with walls of snow and another train trip, this one to Montreal.

Sandor and Ilona got their visas a year later and arrived in Montreal, probably bringing the family's meager possessions with them, including the tapestry. The family eventually moved to a Beamsville fruit farm, and expanded with the birth of daughter Lily in 1960.

"With Vera working on the farm, it was Ilona who cooked, baked, helped Susan with her homework, and cared for Lily," Sazz Fayter continues reading. "She and Sandor lived downstairs, Paul, Vera and the two girls lived upstairs in the old house."

Sazz Fayter, who changed her name from Szasz to Sazz for professional reasons, remembers the tapestry hanging on the wall in that house, but wasn't aware of its significance until Ilona and Sandor moved to a retirement home in Hamilton. That's when Ilona passed it on to her granddaughter.

"When she was moving, she didn't have room for it, so she gave it to me and told me the story behind it," says Sazz Fayter. "I had the room for it and I was a little closer to her than my sister. I was really moved. It will always be a prized possession of mine."

The tapestry, which may date from the early 1900s, is probably not particularly rare or valuable, Sazz Fayter speculates.

"They probably aren't that uncommon in Hungary. I'm sure these things survive quite well when they're not trod upon."

Ilona was an "amazing" woman, says Sazz Fayter -- friendly, smart, cultured, "an incredible homemaker" and a spectacular cook who blended Hungarian foods with Jewish influence, specialized in pastries, goulash, stuffed peppers, challah and other comforts, and invariably burned herself while making her dobos torta, a spectacular chocolate and candy-coated layer cake.

In deference to her new husband's allergies, Sazz Fayter recently took the tapestry to a dry cleaner's where she nervously signed a waiver releasing them from any responsibility for damage. But it came back defiantly in one piece, its colors bright, its shape maintained.

Reprinted with permission of The Hamilton Spectator; photo by Gary Yokoyama.

The Rabbi of Buchenwald