Passover in Black and White 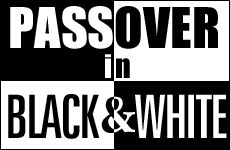 Why the Passover Haggada considers Lavan to be the Jewish people's worst enemy.

World history teems with evil villains who have tried to destroy the Jewish people. The Passover Hagadda reminds us that every generation has them, and God saves us every time. Yet the Haggada nonetheless singles out one individual who was worse than anyone else. And the winner is... Pharaoh? No. It's Lavan, our forefather Yaakov's (Jacob) sneaky father-in-law who tricked Yaakov under the wedding canopy and made every attempt to cheat him again and again.

One wonders why of all the miscreants, genocidal maniacs, and despots with Jewish blood on their hands during the almost 2000 years of Jewish history preceding the Haggada's composition, Lavan was the worst. Pharaoh, a king who literally bathed in the blood of 300 Jewish children daily to alleviate his skin condition, did not get the title.

The Hagadda explains that Pharaoh was less of an enemy than "Lavan since Pharaoh only sentenced the males to death, but Lavan wanted to uproot everything." What does this mean?

To understand the inner message of our Sages, we need to go back to the biblical showdown between Lavan and Yaakov. After years of loyally working for Lavan despite being tricked, Yaakov packed up his family and belongings, all begotten and earned in good faith, and left Lavan's house forever. Lavan pursued Yaakov, and confronted him with an accusation so outlandish that it begs explanation. "The daughters are my daughters, the sons are my sons, the sheep are my sheep, and all you see is mine" (Genesis 31:43). Lavan had the gall to make that claim after Yaakov reminded him of his 20 years of dedicated toil despite being tricked. What possible claim could Lavan have to all that Yaakov achieved?

The answer lies in the name "Lavan." The Hebrew word lavan means white. It represents the potential for any color in the spectrum. One who places all the colors separately on a wheel and then spins it rapidly observes that the combination of colors turns to white.

The color white signifies the potential to receive everything but dedication to nothing.

The power of white lies within the contrast it offers. White is the starkest backdrop for black, and we often refer to something true as black on white. Yet white is committed to no color, and in its purest form, it remains white -- the potential to receive everything but dedication to nothing.

These features characterized the person named Lavan. Lavan was a shyster, one who would offer one deal but switch it with another. He could sound friendly one minute and hostile another, changing colors to suit his ends, but never becoming anything in particular. For Lavan, there was no absolute truth. Only the endless field of possibilities -- the potential for any color -- was real.

Yaakov was the exact opposite. Yaakov was completely dedicated and devoted, and personified unwavering commitment to fulfilling God's will. Yaakov was black on white, the truth made more apparent against the white background, the "Lavan" in whose home he built the family that would become the Jewish people.

An Attempt to Uproot Everything

Lavan understood this, and knew that Yaakov became more set and dedicated in his ways in the context of the "white" contrast Lavan provided. His claim to title over all that Yaakov had was not a legal one. It was a deeper accusation: "I helped make you who you are! You owe me." Lavan was technically correct about his contribution to Yaakov's identity. The intensity of Lavan's chicanery and dishonesty only made the difference between Yaakov and Lavan more obvious, and each became more set in his ways. With that argument, he wanted to take everything that Yaakov had, to claim the family as his own, and to establish the dominance of white over black, of remaining in the realm of possibilities without having to commit to any of them.

Lavan claimed Yaakov's family was his, but it was a claim without merit and was just another demonstration of Lavan's skill at twisting the facts to his advantage.

The mystics saw this battle as the central theme of Passover, and Rabbi Eliyahu of Vilna saw Yaakov's struggle with Lavan as foreshadowing our attempt to survive committed while immersed in Egypt's hedonistic society that celebrated all the possibilities in the world, but resisted commitment to anything. It was a society steeped in black magic to create even more possibilities when the natural range of options ran out.

The exodus from Egypt gives us the tools to resist the same attempt in our generation to take that which is black on white, and reduce it to the spinning color wheel of possibilities. A story told by an Israeli rabbi illustrates this point. A simple peasant went to see a movie for the first time in his life. Fascinated by the vivid color and larger-than-life pictures, images that appeared so real to him, he moved close to the screen and lifted his lantern to get a closer look. To his dismay, all he saw was lavan, white.

The Haggada requires us to see ourselves as if we personally left Egypt. The wheel spins faster and faster, and some elements of society suggest that the whole idea of faith, the notion of absolute truth, is outdated. Yet when one shines the spotlight on relativism, one can see past the sophisticated sounding explanations and find only white. Nothing.

Passover empowers us to stand up for what we believe, to shine our lantern on the screen that others see as reality and expose it for the lavan it really is.

Matzah: Bread of Freedom and Slavery

All in the Seder

The Secret of Eating at the Seder

My Grandfather's Maror
Olivia Newton John’s Grandfather was a Nobel-Prize Winning Jewish Physicist
Don’t Believe in Other Gods Versus God is One
Seeing Without Eyes
Comments
MOST POPULAR IN Passover
Our privacy policy
Aish.com Is Looking for Great Writers