Nothing's been the Same 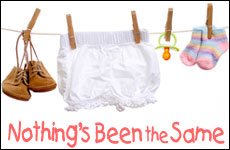 Life sure has changed, my little one, ever since you've joined the family.

It was your first birthday this week. You were utterly oblivious. You couldn't tell me which spread you wanted in the lunch sandwiches, had no classmates with whom to share the big news, and were too little to let me know what you'd like for supper. You got an adorable card from Bubby, but rather than admire it, you promptly put in your mouth.

The morning of your special day was pretty miserable. We went to the eye doctor where they squeezed stinging drops in your eyes and then forced your eyes open for an exam while you howled in protest. I was sad that things were unpleasant on your birthday, even if you don't appreciate its significance. So in the middle of the afternoon, when we were alone in the kitchen -- I making supper, and you sitting in your high chair with a plush toy -- I decided to make you a little party. I took a few mini marshmallows (your very favorite treat), some corn puffs, and a small freeze pop, and placed them all on your tray. You looked at me in astonishment -- whatever had happened to Mommy -- and then dug in with relish.

At supper I told the kids about your little party. They were very sorry they had missed it, but still sang for you and wished you the best. You beamed and clapped, excited to be the center of attention. I looked around at the circle of glowing faces surrounding yours and marveled at the fact that just a year ago you were not yet a part of our lives.

There is a song I sing to you often, one of the many absurd ditties that I made up impromptu and never let go of since.

Once there was a little girl
and Batsheva was her name
And since she's joined our family
nothing's been the same.

The words rung so true on your first birthday. Life sure has changed -- I haven't had a full night's sleep in 12 months straight. No longer does 10 PM mean a quiet house filled with slumbering angels, for you often don't settle down until the wee hours of the morn. You've just gotten to that charming stage of serving as a one-man demolition crew. Last night you ripped the wallpaper and pulled our phone socket out of the wall. The day before you shredded tissues and tore a book. And the list goes on.

But there have been other changes as well. You've touched every member of the family and left them sweeter from the interaction. Akiva, my eldest, has a special spot for you in his heart. Born on his birthday, he calls you his twin (ignoring the nine year gap between you). When he bursts into the house after a long day at school, you're the first thing he looks for. When he sees you, he breaks out into the biggest grin, and runs to give you a hug so tight you squirm in protest. He drums on your highchair when you gets antsy, and showers you with kisses if you get hurt. He shows you off to all his friends, and won't leave the house until you give him your trademark wave. When you're around Batsheva, tough Akiva is the softest boy on earth.

Menucha's love is quieter. She's the one who can calm you when no one else can. She's the one who takes you for long walks around the block two hours before Shabbos. She carries you around proudly – the badge of honor of her oldest sister status.

Devorah's adoration of you is passionate. She loves holding you in her lap, particularly when you rest your small head against her chest. She begs me to put you in her bed, and then lays you down near her and cuddles up close. And when Devorah is cranky and petulant, nobody can calm her as you can.

Shlomi's relationship with you is a complex blend of fierce love and deep jealousy.

And then there's Shlomi, little Shlomi, whose place you usurped. His relationship with you is a complex blend of fierce love and deep jealousy. He's the first to retrieve your pacifier when it falls, and is your biggest advocate when treats are being doled out. He's thrilled when you go outside with him to wait for his bus, and delights in bringing you a selection of toys. Sometimes, his darker side wins out, and he gives a quick pinch, or a small push. But when you cry out in pain and consternation, he's often the one who rushes to comfort you.

My little Batsheva, a mere 23 pounds of person, you touch our home in so many ways. You're brought out a softer, gentler version of every one of your siblings. You unveiled the care, the devotion, which lay latent within. You've unified us in our unadulterated adoration of you. Yes, little one, since you've joined the family nothing's been the same.

Father of the Bride
Do You Like Slow-Cooked Food? Thank the Jews
Ashkenazi Style Cholent Recipe
Were Adam and Eve Jewish?
Comments