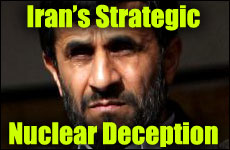 Tehran has lulled the West into believing that Iranian nukes will only threaten Israel. No way.

Iran's satellite launch earlier this month should have been a wake-up call. Instead, the West has reached over and hit the snooze button.

Swift, vigorous measures need to be taken to deal with the new reality that Iranians, who could possess a nuclear weapon by the end of next year, have demonstrated that their Safir 2 rocket, which was used as the launch vehicle, is able to deliver a warhead to southern Europe.

The Iranian rocket had two stages, Mr. [Charles] Vick said. If it were carrying a small warhead, he said, the Iranian missile could fire the weapon about 2,500 kilometers, or slightly more than 1,550 miles. The rocket could send a weapon to targets in Israel, but experts said that Iran had already possessed that capability.

That falls short of the range of an intercontinental ballistic missile, Mr. Vick said. For Iran to achieve that technical step, he added, it would have to develop a more powerful basic rocket or more upper stages — two goals that weapons experts think it is pursuing.

Dr. [Charles] Ferguson of the Council on Foreign Relations said that Iran's technical advance, if translated into a military missile, might put a warhead within range of southern Europe, including Turkey, Greece, and Italy.

Heritage Foundation senior fellow and former deputy assistant secretary of defense Peter Brookes' reaction to the launch: "In theory, if you can launch a ballistic missile that can place a satellite into Earth orbit, you have the scientific wherewithal to hit a target anywhere on Earth with a warhead."

Most Europeans and Americans are not keenly aware that Iran is on track to having the ability to threaten Kuwait City, Riyadh, Dubai, Istanbul, Athens, Rome, Berlin, Paris, London, New York, Chicago, and Los Angeles with nuclear weapons. They are oblivious to the ultimate aim of the Iranian nuclear weapons program: to transform Iran into the dominant global superpower by enabling its regime to attain hegemonic control of the petroleum production of all of the Gulf region's oil states, while preventing the West from taking military action against Iran by deploying missiles that can obliterate Western cities. Instead, Americans and Europeans are under the impression that the program's main goal is the destruction of Israel.

This misconception has been fostered by numerous statements by senior Iranian officials, including the following:

Such ravings are too often interpreted as tacitly giving a pass to countries that have the good fortune not to be Israel. For example, Hillary Clinton said during the campaign for the 2008 Democratic nomination that if she were president, Iran's "use of nuclear weapons against Israel would provoke a nuclear response from the United States." Evidently it didn't occur to the present secretary of state that a U.S. nuclear attack on Iran could result in an Iranian nuclear attack on the U.S.

Barack Obama proclaimed in a June 2008 speech at the American Israel Public Affairs Committee (AIPAC) annual conference that he is aware of the gravity of the Iranian nuclear threat to Israel. But there is disturbing evidence that he does not perceive Iran as posing a direct threat to the U.S.

Tehran has succeeded in minimizing Western concern about Iran's nuclear weapons program by making it seem to be somebody else's problem.

In reality, Iran (which, by the way, isn't all that tiny: with an area of 636,296 square miles, it's bigger than Germany, Denmark, the Netherlands, Belgium, France, Spain, and Portugal combined, and its population is 66,000,000) would pose more of a nuclear threat to us than the Soviet Union did, because the Soviets could be — and, as it turned out, were — deterred.

Those who maintain that it will be possible for the West to "live with a nuclear Iran" because Tehran will supposedly be deterred by the Western nuclear arsenal appear to be afflicted with some sort of cognitive dysfunction that blocks them from comprehending the implications of Shi'a Islam's belief that an apocalyptic war is both inevitable and desirable, grasping Shi'ite doctrinal preference for the delights of the afterlife over the tribulations of worldly existence, and drawing appropriate conclusions from the Islamic regime's incessant glorification of "martyrdom," culminating in Ahmadinejad's assertion that "millions" of Iranians are prepared to die in the conflict between their country and its enemies.

The stream of invective calling for, predicting, and/or gloating in advance about the elimination of Israel constitutes one of the most effective strategic deceptions in history. Tehran has succeeded in minimizing Western concern about Iran's nuclear weapons program by making it seem to be somebody else's problem.

On February 4 a meeting, scheduled before the Iranian satellite launch was announced, was held in Wiesbaden, Germany, of a working group known as the P5+1, whose purpose is to coordinate Iranian nuclear weapons policy among the five permanent members of the UN Security Council — China, France, Russia, the UK, and the U.S. — plus Germany. The U.S. was represented by Under Secretary of State for Political Affairs William J. Burns. The British, French, and German attendees were dismayed to find that the American diplomat was unable to tell the group what the Obama administration's Iran policy is. Burns said that the administration has not yet formulated its policy toward Tehran and that doing so will take approximately two months.

With each passing day bringing the world one day closer to the waking nightmare of a nuclear-armed Iran, it is remarkable that the administration of a president whose main electoral promise in the realm of foreign affairs was that he would shift to multilateralism and diplomacy has introduced a two-month delay into the process of multilaterally coordinating the efforts of diplomats.

Could this lack of urgency result from the misperception that if attempts at multilateral diplomacy fail, the cities that will be targeted by the nuclear weapons Iran will deploy will be located in a country other than the United States?

This article originally appeared on www.pajamasmedia.com.