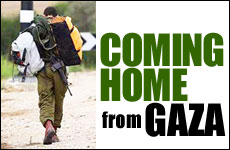 Thank you God for bringing my son home.

My son came home from Gaza just a few minutes ago. He came home as we had sent him off, only more tired, worn and dirty. Thank you God for bringing him home. To his wife, his brothers and sisters and his loving brood of nieces and nephews. All of us have been waiting patiently these past three weeks to hold him in our arms.

Barely able to wait to embrace him, I ran across the highway where his ride had dropped him off. I grabbed him in the middle of the road and cars driving into my settlement had to veer around this sight of me standing on tiptoes reaching for my tall, handsome son's face. The drivers waved at us. A few rolled down heir windows to say "todah -- thank you" to my son. I whispered todah again to God.

I helped him toss his heavy bags into the trunk of the car. The heaviest among them being the one weighted down with foodstuffs that Israel's citizens sent to our soldiers. Tens of thousands of kilograms of food poured into the bases in the south. Cartons upon cartons of instant soups, nuts, pretzels, cookies and nosh of every kind. All sent by individuals, families, schools and businesses from throughout the country. We could barely lift his 'booty' and we both shared a laugh as we flung it onto the back seat.

The words that had been in my heart for so long melted on my tongue. My eyes drank him in, tall, bearded now, and his face and soul a bit darker than before he left us that Sunday morning. His presence was all that I had prayed for each day since he packed his bags and left before the sun even rose that cold morning.

I pulled in front of his apartment, a few kilometers from my home, and as we descended the steps I heard him speak gently and lovingly with his wife at work, telling her how anxious he was to see her. He turned on the boiler and laughingly told me, "I'm not getting out of this shower for the next hour." The bags fell to the floor and he leaned against the kitchen counter to untie his boots, swiftly flinging them aside and letting his bare feet rest on the tile floor. He was exhausted and I hesitated to start with the barrage of questions that had been streaming through my head every day, every hour for these past few weeks.

He smiled as he opened the bag of goodies and told me about the elementary school children from Mevasseret Zion who had attached notes with their gifts. He spoke with three of them to thank them personally. One child wrote a three page letter and the soldiers in my son's unit were grateful to learn more of this 8-year-old's daily life, his favorite subjects and his fondness for playstation. When they called to speak with him, the boy was overwhelmed and kept calling them "gibborim" heroes.

This was a war that was guided by the Hand of God. Everyday we felt His presence."

"Ima," he said, "I'm tired now, but I have to tell you how extraordinary this nation is. The children who wrote to us, the people who sent their good wishes with their packages of food, the businesses that sent truckloads of goods. The soldiers I served with, each one caring deeply about the other one. The IDF who made sure that we were well trained and well equipped for our mission. But mostly, mostly, this was a war that was guided by the Hand of God. Everyday we felt His presence -- whether deciding to enter a building by smashing down the back wall rather than entering through the front door, only to discover that the front door had been booby trapped, or searching rooms in a house and uncovering a tunnel under a bed we had lifted where tens of Hamas terrorists were hiding in the hopes of kidnapping one of us, or dozens more stories."

I looked at this child's face and saw the extraordinary young man he had become. Filled with faith. Feeling a passion for those values that have held this nation together for thousands of years. And, his very presence. His very modesty. His deep felt pride at being part of this nation. All of this wrapped around my heart and left me humbled.

"And I will lift up my eyes unto the mountains, from where my strength will come."

So You Want to Move to Israel?

Tale of a Reluctant Israeli
The Blue Beyond
Great Place to Live
Is Eating Supposed To Be Spiritual?
Comments
MOST POPULAR IN Israel
Our privacy policy